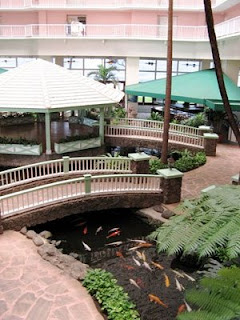 This is the front of the hotel. It's a massive thing filled with fake waterfalls and splendid viewing points.

But I must speak a bit about the sales discussion. I was met by someone named Kevin, who is originally from Boston and moved to Hawaii a couple decades ago. He has been in sales all his life. The "closer" was Nancy. Nancy was recovering from a hand fracture, had a cast - I expressed interest in her injury, so she told me about how her high heel had caught on a stair and she had slipped down three steps, was stopped by a landing, landed on a left knee and a right hand, all while carrying a glass of water in her left hand which, much to her annoyance, in the moment of falling she was determined to not spill. She said she managed to end up with half the water still in the glass. (I love stories like this.)

Anyway, I learned all about the "product," (actually about 5 products all packaged together), and what a great thing it was to spend the rest of one's life paying about 40,000 dollars US, plus another $1000 or so maintenance fees, for the privilege of indulging a travel bug four times a year in many different locations all over the globe in luxury. If I bought in Maui, I would become everyone's best friend and they would all want to trade with me so they could stay in Maui for a week while I stayed somewhere else for up to four weeks, for only a few hundred dollars a week. After about two hours of this, I finally got to see the suite, and we took one of those scary little glass-walled elevators up. Kevin was nice enough to let me take pictures from the balcony.

When it was time for the "close," I let them know that although I really appreciated the opportunity to learn all about their product, and it all sounded very nice, and I really was enjoying the photons here in Maui, that I wasn't interested in purchasing a time share. They wanted to know why. So I explained that although I was here and having the time of my life, I really did view a Hawaiian vacation as sort of more of a once in a lifetime indulgence, not a way of life. They looked at me as if I were from another planet somewhere.. how could I resist? I said that, really, truth was, I was more interested in reducing my carbon footprint.

The jaws dropped. They didn't get it. Nancy said, "But that plane is going to take off whether you are on it or not." "Yes," I said, "I realize that, but the more people who decide not to take planes the fewer planes there will need to be sucking holes in the ozone and contributing to global warming.." .... had they heard about global warming...?

They had, but they just couldn't connect it to anything they had to sell. Nancy and Kevin looked at each other. Kevin asked her, how do we respond? And Nancy looked at Kevin, then at me, and said, "This is the first time anyone has ever used a "carbon footprint" objection. We haven't been taught how to counter this objection."

After that, it was pretty clear the party was over, and it was time for winding it up. After one more little survey, I left and met Ben the Phillipino cabbie who I had arranged to meet at 2. Perfect timing - there he was.

On the way home he asked me how the meeting had gone, and I told him I didn't buy a timeshare. I said that although I loved being in Maui, and that I realized tourism was the main economy, that my being here was a one-time trip and that if I really wanted to be here forever I would just move here, like he had, not fly back and forth all the time, hurting the ozone. I said I thought the lifestyle was wasteful, that I doubted it benefited the local people much other than provide some jobs cleaning up condos and pools and maintaining buildings, that most of the profit probably went to the company. He didn't offer me his opinion - perhaps he didn't have one, perhaps he didn't feel comfortable expressing it if he did.

Anyway, we left it at that.
Posted by Diane Jacobs at 8:09 PM

I loved this line in your post:
"This is the first time anyone has ever used a "carbon footprint" objection. We haven't been taught how to counter this objection."

I wonder who creates the training sessions where they learn how to counter all objections. It doesn't surprise me, but it is a little weird.

My Dad loved to go to "free" stuff offered by time share condo sales. He was a CPA and very opinionated. When the sales pitch started he would relentlessly explain the math about how much that little condo was really selling for by the time all the owners chipped in their $40,000 pieces and how much the maintenance fees added up to when everyone paid those. He would start talking about what a fabulous money making scheme it was. According to him, he was generally invited to leave while the sales pitch continued to the other folks. He actually enjoyed the confrontation as much as the free dinner or whatever.

Great photos. It is snowing heavily here tonight. At least that is prettier than grey drizzle :-)

Haha! Love the story about your dad. :-)