Have we overlooked the skin in manual therapy?

In a recent post I showed some pictures of slides I would be using for a presentation a few days later. Since then I've been to Newfoundland, gave the talk, and have returned. Here is a google doc containing the slide show for anyone interested. It's a bit heavy at 37 MB, but anyone interested can download a pdf at this google link. Have we overlooked skin in manual therapy?
Posted by Diane Jacobs at 10:08 AM No comments: 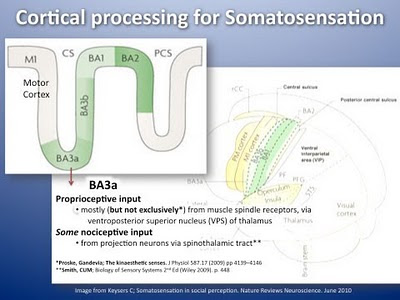 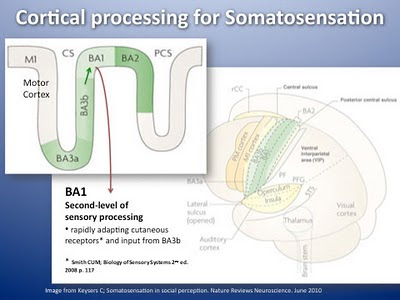 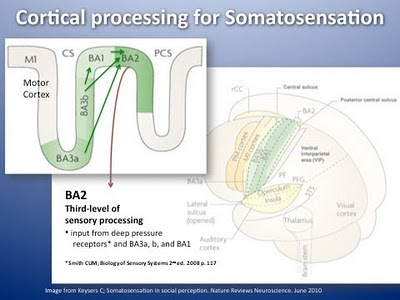 I wrote here about a conversation I had with Paul Hodges of PT motor control distinction, while bumping around in a minivan and while enjoying fabulous food and drink in Brazil. If only I had had this series of slides at that time, there might have been less quibble. Anyway, I found materials and have made them subsequently for a talk I'm giving this coming weekend called "Have we left the skin out of manual therapy?" in which we'll be presenting the results of our pilot project measuring the effects of skin stretching treatment on pain. The two sources for this 7-slide segment were:
1. Smith CUM; Biology of Sensory Systems
2. Keysers C; Somatosensation in social perception

1. It would appear there are 4 functioning somatotopic maps up there, not just one.

2. It looks like only one area (about 25% of the cortical real estate dedicated to somatosensory processing), BA3a, deals directly with muscle spindles. The other 75% directly deals with tactile (exteroceptive input) and secondarily with whatever BA3a has already processed.

3. Each of the tactile processing areas deals with a specific sort of mechanosensitivity.

4. It looks like (to me, at least for the moment) that the brain is more concerned (based on how much of its cortex is involved) with somatic exteroception than with somatic (muscular) interoception; might this relate to examining potential threats from the environment?

5. According to the Keyser paper a lot of socially evaluative areas pour their information into the mix as well.

6. As a manual therapist I'm concerned with creating an environment and a therapeutic relationship in which all social threat is reduced, and in which a non-nociceptive, non-noceboic, kinesthetic input will be "added," so that the brain has something to work with to down-regulate pain felt in a "region," while otherwise permitted to be peaceful/safe. I think this information provides a bit of science base to support that inclination.
Posted by Diane Jacobs at 5:18 AM No comments:

Biomechanics and the virgin Mary in a piece of toast

Position statement
My profession has become ever more insistent (since its takeover by fundamentalist orthopaedic specialists) that its members see the world of patient problems as biomechanical in nature and keep treatment concepts "corrective" of "faults" such as "weakness," "asymmetry,""imbalance" and "poor posture."

Biomechanics
These exist. People are physical, and biomechanics are basically what peoples' bodies do to hold themselves up against gravity and move around. They are patterns of movement, nothing more. They are measurable, sort of, and a science does exist around them, but clinically there is not much point in measuring them - they can change radically, depending on how people feel, whether someone is experiencing pain or not.

I definitely look at biomechanics. We all do. They are useful as feedback to our own therapist visual cortex to gauge if our treatment is being effective or if we should change course.

But biomechanics are like cloud patterns. They will shift anyway, should not be made into more than what they are - sudden changes should not be assumed to be "proof" (explicit or implicit) that "I, therapist," am therefore great.

Patterns on toast
These also do exist, although there is no science as far as I know. They are a natural function of burning a piece of bread. They should not be made into more than what they are - burnt spots. Neither should biomechanics.

Pareidolia
This is the name of a well-recognized perceptual fantasy: people read faces or pictures into patterns on toast or in clouds or whatever, see something that isn't there and which has no bearing whatsoever on the nature of the material they are gazing upon.

Finding "fault"
This is a common human trait. Sometimes "fault" actually exists. Lots of times it does not, and "fault"-finding is mere perceptual fantasy, like pareidolia, i.e., visually projecting onto an external object something that has nothing to do with anything but one's own personal (usually incorrect and off-target) mentation.

Finding things in biomechanics, then labelling them as "weakness" or "imbalance" or "poor posture" is value-judgy. Considering value judgments worthy of categorically diagnosing and treating is to somehow believe that value judgments can be objectified - they are not objectifiable, scientifically, IMO, because value judgments are not objective to begin with. Nevertheless they persist as a collective pareidolia, and people keep trying to couple them with biomechanics, keep cranking out papers full of implicit and explicit linkages. Excuse me - I think there is something wrong with that.

This is me, finding fault.

Prior plausibility
This is something that scientific investigation requires in order to even be scientific. There is no prior plausibility in linking biomechanics (expression of motor output or expression) to fault-finding; correlation is NOT causation, it isn't scientific, instead it leads to conceptual hallucinating all over the place. Conceptual hallucination often results in something known as pseudoscience.

Ritual
This is common human behaviour done to restore order to a universe that seems to go cockeyed viewed from a subjective standpoint. It's magical behaviour in that:
When done regularly in a group setting, this is known as "religion" (e.g., Roman Catholic)

What does this have to do with PT?
There are different camps within PT. Using the religion metaphor, there are:
Then there is me. What makes me different?
I checked out the two main sects of PT, but liked neither of them. Became an atheist PT and manual therapist/atheist/heretic/apostate beside being an ordinary atheist, even while continuing to practice hands-on therapy, which I reframed as human primate social grooming, in order to
Did fewer rituals, less and less of the time. Mostly wandered around in the desert. Found the oasis - neuroscience and pain science. These tell me that biomechanical patterns aren't important (which suited my own confirmation bias) and freed up even more hard drive to examine what the humanantigravitysuits standing in front of me every day really needed from me in the way of understanding and treatment.

Not much, as it turned out. No rituals, really. Just a bit of engagement, handling, education, reflection, support, encouragement, help, reinforcement, suggestions for pain management.
Posted by Diane Jacobs at 11:58 AM 3 comments:

File this one under "cool new words to ponder."

I am finally allowing myself to love weather again. Soaking up the summer.

Can't tell you how perversely smug I feel watching TV news from Vancouver, the daily weather report, noting that nothing has changed or ever will change there, that it's still raining and summer has not yet arrived. Not that it ever will, either. Maybe one or two hot days in a row, then another week of cool cloudy sky, breaking up the "summer" with a week of "winter."

Here, the weather is the kind of hot, sweltering, full-on-sun-boring-down-all-dayl-o-n-g, sleeping-on-top-of-the-bed kind of heat all-night-long, window open (in a place where it's safe to leave windows open) dayafterdayafterdayafterday weather I've missed for so long, weather that brains can revel in after the combination of such a long hiatus and cold winter.

Not that it's pleasant to be out in such sun; rather it's heat affecting skin, opening pores, challenging sweat glands - it's the feel of a nervous system reversing its normal protective mode, pouring out sweat like an offering.
I do have an air conditioner, but prefer to tough out the heat if I can. These bones feel heat getting all the way into them for a change. My brain enjoys the process of feeling heat getting all the way to bone, does not want stress or pressure or distraction to be somewhere or do anything else, just wants to pay attention to this sensation it remembers from a long long time ago. Childhood. Prior to air conditioning.

Maybe the internet and google are making my brain too shallow and distractible.

Maybe it's a combination of all these. Whatever.

Some little grumble deep inside my head reminds me that I have a presentation to get ready for later this month, that I have not yet tackled.

Desuetude is a word to describe the laying aside of something, like a term or word or habit of thought or law no longer useful. A great word. I came across it in a book called Biology of Sensory Systems. If I had to live the rest of my life on a desert island and could take one book to keep from going mad with boredom, it would be this book.

On page 38 the author, Christopher Upham Murray Smith (who has participated in writing many books), culminates a preliminary introduction to the complexity of the visual system with its multiplicity of serial and parallel sensory processing circuitry with this sentence:

"The idea of a single hierarchical stream of information proceeding to ever higher "centers" in the brain is falling into desuetude."

I'll go back to the book now, now that I've managed to cobble up a blogpost about desuetude and realize I've laid aside my upcoming presentation to the point where I better start to reframe it as a commitment that requires a bit of attention. But I so do want to also continue enjoying my first real summer weather in absolute decades. Maybe I can have it all. Apply myself intensively to the project a few hours a day, lounge around the rest of the time drinking cold tea or coffee out of the fridge over ice cubes, watching TV, working on a jigsaw puzzle, observing the creep of the sun across the balcony until at about 5 PM it blasts directly in through the screen door, tries (and fails, yet again! Haha!) to boil me off my own bones.
Posted by Diane Jacobs at 7:54 AM No comments: