I watch this battle with interest and enthusiasm not because I personally have anything to gain or lose anymore, but because I just enjoy it. I get why people flock to tennis games and things like that.

Recently a paper by Chad Cook came to my attention on twitter: The Demonization of Manual Therapy,
in response to a years-long blog siege by Adam Meakins, a physio in England, who argues that manual therapy deserves to be taken down by a few or by many pegs in our world.

Some disclosure on my personal perspective.
I am (rather was) a licensed physio in Canada for 50 years. I am no longer licensed but I still consider myself a physio, recently retired.
I saw a lot in 50 years. I felt the Big Wave of orthopaedic manual therapy hit in the 1980's. I wanted to be a manual therapist but found I was allergic to the frank discomfort of the clunky procedural learning, plus I found the biomedical, biomechanical premise, "pain comes from joints,"  kinda stupid, really. So I plowed on with what was called at the time "soft tissue" techniques.
A great deal of snobbishness went on - those who became "certified" as orthopaedic manual therapists within the profession looked down their noses at those of us who dropped out. We were considered non-scientific and less qualified. Our bottom-up "soft tissue" propositions were pooh-poohed and scorned, even though theirs were equally suspect.
The gestalt of it all, the momentum of it was understandable - they wanted to create something, they wanted to scientifically examine manual therapy, which was good, I guess... Cook's paper exemplifies that attitude I think. The flip side of that, though, is that the dubious snobby attitudes of OMT, buttressed by a bit of added 'silk purse from a sow's ear' type of academic prestige, held strong even as good research came along to disconfirm said propositions! We can't afford to lose any ground in our social climb! A fortress has been built and must therefore be defended, dammit!

For me, the entire purpose of manual therapy was to help people with pain problems they were having, more importantly, that they were worried about, anywhere along a scale of being annoyed by but not really disabled much by their ache or pain, all the way to being terribly anxious and physically impaired by it.
The central organizing principle around which I revolved for most of my career was pain relief. Period.
I was happy to embrace:
1. pain science and the growing wave of research dedicated to its relief or at least self-management
2. research that supported a biopsychosocial attitude toward MSK pain to replace the clunky biomedical biomechanical one we had been saddled with since Descartes 400 years prior

The war rages on. People get upset at Meakins, who is seen to have started the fight. He doesn't care. He's quite ready to be a martyr. His perspective is that it's a righteous fight and that he is a warrior doing Something Good for the profession. He wants to wake people up. He cheerfully lobs his catapults at the fortress, which he knows like the back of his hand. He gets captured, brought to "court," then released because he is as good a science-based arguer as he is at getting under people's skin!
Waking up is uncomfortable.
I get it.

I have always lived outside that manual therapy fortress, even though I know a lot of the tunnels into and out of it. My strategy to get through life was to argue for a new version of manual therapy because I decided based on pain science that none the old ways deserved any respect, based as they had been on faulty premises and narratives.

Cook defends the fortress. Most of the defenders of any fortress are those who would feel very psychosocially uncomfortable living outside it. I think in the manual therapy world fortress defenders still entertain delusions of grandeur, the possibility that one day, manual therapy will gain the respect they feel deep inside themselves that it deserves. But he took the bait and fought back in the literature, instead of just grumbling and trying to take Meakins out politically. And for that, I applaud Cook.

To know what these two are like in person, in real-time debate, watch this podcast hosted by Jared Powell. 👍


Posted by Diane Jacobs at 8:28 AM No comments:

A few months ago I had a dopamine spurt of some kind, and published a blog post to do with brain lateralization and insular cortex and implications about pain. Here is a link: A few new musings about pain and brain.
Consider this a follow-up post to that one.

Firstly, I want to include a link to the Tucker paper from 1984, the one I found buried in a book about brain and self/no self.
Tucker, D. M., & Williamson, P. A. (1984). Asymmetric neural control systems in human self-regulation. Psychological Review, 91(2), 185–215
(Obviously, I forgot to include this particular link at the time, even though I linked to all the other things that are connected and that mostly just swim in a school, like fish, in my mind somewhere. That's lock-down brain for you. It misses a few things.)
Looks like I did link it in this old blogpost from 2012 though, about Iain McGilchrist's book on brain lateralization. Asymmetry of brain sides: size, structure, neurochemistry

Reviews the literature on the neurotransmitter substrates controlling motor readiness, showing that these substrates produce qualitative changes in the flow of information in the brain: Dopaminergic activation increases informational redundancy, whereas noradrenergic arousal facilitates orienting to novelty. Evidence that these neurotransmitter pathways are lateralized in the human brain is consistent with the left hemisphere's specialization for complex motor operations and the right hemisphere's integration of bilateral perceptual input. Principles of attentional control are suggested by the operational characteristics of neural control systems. The affective features of the activation and arousal systems are integral to their adaptive roles and may suggest how specific emotional processes dynamically regulate cognitive function. (4½ p ref) (PsycINFO Database Record (c) 2016 APA, all rights reserved)

This morning a member of the Dermoneuromodulating group posted an abstract to a paper about the insular cortex and pain from way back in 2010 which somehow escaped my attention at the time:
Wiech K, Lin CS, Brodersen KH, Bingel U, Ploner M, Tracey I. Anterior insula integrates information about salience into perceptual decisions about pain. J Neurosci. 2010;30(48):16324-16331. doi:10.1523/JNEUROSCI.2087-10.2010

The decision as to whether a sensation is perceived as painful does not only depend on sensory input but also on the significance of the stimulus. Here, we show that the degree to which an impending stimulus is interpreted as threatening biases perceptual decisions about pain and that this bias toward pain manifests before stimulus encounter. Using functional magnetic resonance imaging we investigated the neural mechanisms underlying the influence of an experimental manipulation of threat on the perception of laser stimuli as painful. In a near-threshold pain detection paradigm, physically identical stimuli were applied under the participants' assumption that the stimulation is entirely safe (low threat) or potentially harmful (high threat). As hypothesized, significantly more stimuli were rated as painful in the high threat condition. This context-dependent classification of a stimulus as painful was predicted by the prestimulus signal level in the anterior insula, suggesting that this structure integrates information about the significance of a stimulus into the decision about pain. The anticipation of pain increased the prestimulus functional connectivity between the anterior insula and the midcingulate cortex (MCC), a region that was significantly more active during stimulation the more a participant was biased to rate the stimulation as painful under high threat. These findings provide evidence that the anterior insula and MCC as a “salience network” integrate information about the significance of an impending stimulation into perceptual decision-making in the context of pain.

Now, it's true that this 2010 paper is specifically about nociceptive pain, and we must bear in mind that there are a few other kinds now formally acknowledged by IASP.

Also it talks about "activation level of bilateral anterior insular cortex." So it would seem that these researchers weren't interested in sifting out any info about lateralization in their study. Oh well... c'est la vie.

I was prompted to dig up a 2015 Scientific American Mind article by Lydia Denworth on the connection between touch and insular cortex, mostly for the amazing illustrations of representative maps for somato-sensory cortex and for insular cortex. (Note: the link does not contain these images but the original does.) 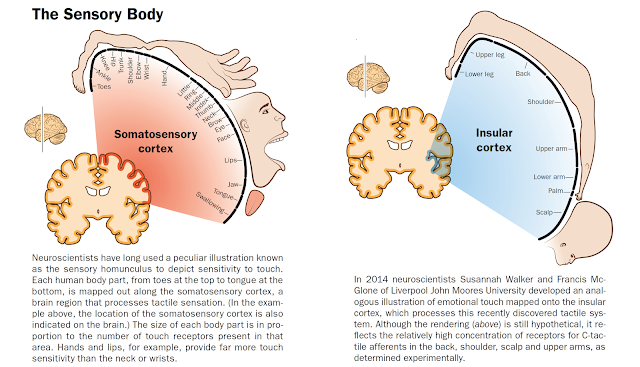 Note that the insular cortex map is "hypothetical" - I guess this means that the researchers didn't go directly into the brain with probes the way Wilder Penfield did for the somatosensory cortex. However, I am willing to accept that it represents C-tactile afferents, those lovely little pleasure sensors all over the skin that the somatosensory cortex doesn't map very well for.
In fact, if you compare the two maps they are like opposites. Big mouth, small mouth. Big hand, small hand. Small body, large body. Small head, large head.

Anyway, I'm all out of dopamine, so, time to stop.

Posted by Diane Jacobs at 9:42 AM No comments: