I'm pretty happy today - can't believe it in fact - was given an A for class number one in a series of three, toward a certificate in pain management, at U. of Alberta. It's great to have outside confirmation that my frontal lobes still work after all these years of non-academe, no-rigor other than self-applied. Really, I could not be more thrilled.
Posted by Diane Jacobs at 6:59 AM No comments:

I feel the way I imagine women feel right after giving birth. This is the second such birth in the span of three months. Last night I finally delivered a presentation I worked hard on, for weeks and weeks, lost sleep over even if you can imagine.

The presentation was on Melzack's neuromatrix model of pain, and was to be 75 minutes long. I think it came out to just about that long. We got rolling after a couple technical glitches, about 5 minutes late, but everything went along fine from then on.

I wrote a bit about it here (-> LINK).
(A pdf of the slide show is attached in that link, for anyone interested in reading through 128 slides. I can't attach a pdf here, directly.) 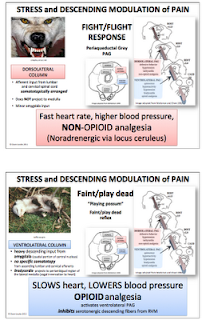 Posted by Diane Jacobs at 2:31 PM No comments:

A flexible and chemically inert-as-possible containment system holds our human antigravity suit together, and keeps it from being a pile of juice&bones lying on the floor. It is the fascia tissue system. So, this is a fact of being in a living body, I guess. I mean, if you have to be alive for awhile as a blob of conscious awareness, I guess it's good to have a container for same. But my fascia is not my conscious awareness. People in comas with no conscious awareness still have fascia. So, the question is, why is fascia so fascinating for so many people in my apparent peer group? Mostly, one suspects, as a make-work/make-$ project for interest groups.

For all sorts of reasons, a large branch of the human primate social grooming community keeps itself entranced with information derived from research on this tissue. It helps promote and maintain such research, sponsoring and encouraging attendance at events like actual fascia conferences. In doing so, it inadvertently or deliberately acts as an echo chamber or microphone feedback or some other sort of step-up transformer, to maintain a mesodermalist attitude toward manual treatment instead of helping to evolve a more (in my own opinion) enlightened ectodermalist attitude; as an example of the latter, I'd like to refer to a wonderful story recently in NYT: Giving Alzheimer’s Patients Their Way, Even Chocolate.
Imagine that. Creative adaptation of caregiving for people whose frontal lobes don't work so well anymore, in order to keep them less stressed and thereby harmoniously and socially integrated into the land of the alive and sane, instead of deciding on a system which is "efficient" and "obeys rules" and thereby coerces disintegrating nervous systems to adapt to it. I'm way more in favor of the former, not the latter. The systems management types are not pleased, for now, but maybe later, should their own personal nervous systems happen to fail, they might get what this is about.

There are all sorts of layers to fascial "thinking" just as there are in fascia itself. I explored a few of them in this post recently. It's no wonder I'm not particularly drawn toward considering my work as a human primate social groomer as having anything much to do with this context for it.. I find myself instinctively repelled by most of the definitions and derivations of the word itself. It seems to boil down to externally imposed boundaries/supporting structures, at levels simultaneously physical and social and symbolic. Everything from religious vestments to political movements to architectural components to car parts to anatomical structure. Mostly it seems to be about superficiality, or placement of a barrier, or confinement imposed from without. Not that this isn't useful from a physics perspective, in terms of mechanical leverage. But I doubt it's any sort of ultimately therapeutically useful way to let one's own mind, as a groomer, be corralled, at the symbolic level, or social level, if your intention is to help other nervous systems outside your own to be freer and feel less confined/stressed. Like, by pain. For example.

The only way forward (really!) is to learn what the nervous system is and does. Trying to understand what makes the human antigravity suit tick by learning about fascia will forever be like trying to learn to fly a plane by deliberately ignoring all the dials and gauges and indicators on the panel, in favor of being overly/mistakenly fascinated by the moulded material of the panel itself.
Posted by Diane Jacobs at 9:30 AM No comments: