Screamingly bright blue sky day, long long walk, purple vetch, dandelions gone to seed, railroad tracks, wild sage (two kinds), lots of fresh salmon and cheap summer berries in the grocery store. A few mosquito bites, but rubbing fresh sage on them takes away the itch. At least, it did for me, today. All feels well outside and inside.
Posted by Diane Jacobs at 7:51 PM No comments: 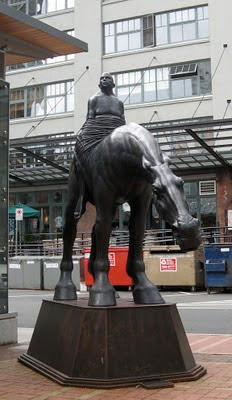 A lull and a kvetch.

It's almost the middle of June.

I've been out running every day. I think I'm trying to get rid of stress from a year ago, still.

The weekend before last I spent five rain-sogged days in Vancouver shutting down my practice there. It wasn't much fun, but it also didn't hurt very hard. It was just an annoyance to have to go do that instead of being able to do something else. It wasn't all bad - I stayed with friends who are lovely people, saw some others I hadn't seen in years, met a new friend that I'd only had online contact with prior.

The city has changed a lot - I rode the new rapid transit line to downtown. Very swift. It goes underground, so not a skytrain, a subway. I barely recognized downtown. Well, really it was Yaletown, not downtown... I've only ever been to Yaletown twice before, so no wonder I didn't recognize anything. I met Paul Ingraham, the skeptical massage therapist/writer, for the first time (once we found each other) - for lunch. I have no idea what this statue is about (outside the subway Yaletown station), other than that I liked it visually. It reminds me of me, little pointy head, all tied up on a horse (instinctive self) that has a big curious nose, going nowhere, huge heavy feet welded to the floor.

I think what I feel is sort of like post partum depression. A highly anticipated event associated with a lot of preparation and organizing and execution ends, and what's left is... a void. Oh well. We carry on. It's not like I haven't had this feeling for years already, in different guises, with my left frontal cortex slapping on different meanings one after another as it tries to alleviate concern... It ALSO doesn't help, however, that for whatever strange reason, the weather in Weyburn has been cloudy and rainy! In June! This is bizarre and insane, and NEVER happens. Well, until now I guess. I have sheepskin slippers on my feet, which is riDICulous foot apparel for Saskatchewan in June. Ridiculous! It should be hot and sunny and sweltering outside. Instead I might as well be in f****** Vancouver. I don't get this and I hate it, but it is what it is. Jokes are being made about the fields under water, having to plant rice for a change, etc. Really, it isn't funny. It wasn't funny last year when farmers were still taking off crops in mid-November. Very weird climate changes. There is nothing like having one's expectations of sunny bright weather and the busy-buzzy feeling of increased energy it gives me be cancelled by cloudy rainy day after cloudy rainy day - SAD on the prairies!?
Sheesh.... Where can I escape to now for some decent sunny Canadian weather? I've used up my options.

OK, rant over. I'll have to dig around for some inner motivation instead.
Posted by Diane Jacobs at 12:22 PM No comments: