Musings about a grumpy book review

I wrote a book a few years ago, and reviews are still coming in. One of the most recent ones made me laugh. 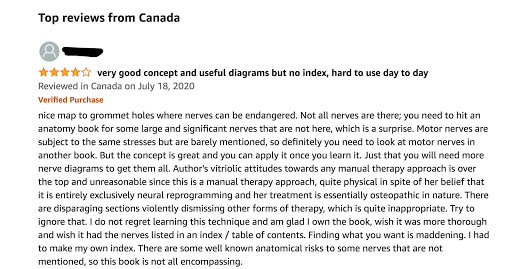 And you still gave it 4 stars. So thank you.

I can see that you are cognitively dissonant and feeling disturbed by that, but still interested. I appreciate that.

I want to parse this out just a little bit. I presume this person is an osteopath, and if so, was steeped fully in anatomical relationships and tissue types and taught an operative mindset, taught that they would end up with magic hands and be able to change tissue with them.

Even if they weren't an osteopath, even if they were from any other branch of the human primate social grooming tree, they would likely still think that way.

I am from the physiotherapy branch and was fully indoctrinated in muscles and bones. I systematically pondered through all the different kinds of tissues there are in the body, practiced my moves, and still couldn't figure out WTF I was doing or why things I did worked. I felt I was conceptually stuck in a mental ghetto, yearning to be free. Going to countless cont. ed. classes only helped a tiny bit.

Finally, I found one that helped me free myself from the mental ghetto. It was David Butler's class in Vancouver, in 2000. He taught nerve physiology. How pain might arise from nerves becoming trapped. How they might recover by targeted handling.
Beautiful.
Like music to the ears.

I graduated in 1971. How stupid I believed I was, to have gone that long - three decades!! - without ever considering that the nervous system might have something to do with something, or that less doing, less provisional acceptance of implausible explanations, and more actual thinking might be in order, and that one could trust the nervous system to do its own self-correcting and that the manual part of manual therapy might be just to help it remove its own obstacles from its own self.  I wrote that book to help other practitioners avoid all those pitfalls.

John Vervaeke, a cognitive scientist and cognitive psychologist at U. Toronto, has many, many youtube video lectures out, explaining how the mind works and his favourite topic, relevance realization. His quest is to figure out how the brain chooses what to pay attention to and why. He wants to help the world awaken from "the meaning crisis." He wants to attain wisdom. He wants to lay out a path that is scientifically valid, grounded in reality, existentially non-threatening, and will eventually circle back to Plato, his favourite ancient philosopher, with touches of Socrates along the way.

What I have done with these lectures is try to understand them by making PowerPoint notes of some of them. 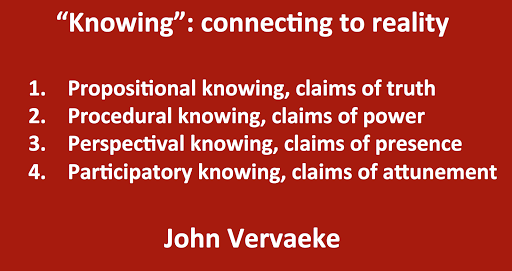 ...............................
He has been interviewed countless times.  I recently watched him interviewed by Rebel Wisdom in 2018. He described, as usual, how early impressions about the divided brain left implications that were quite wrong, designating entire human beings as either right-brained or left-brained, when in fact all people use both sides of the brain together at all times.

Things I took away were that actually the two sides inhibit each other, usually successfully, until agreement is reached and a mutually satisfactory solution to a problem is produced. He talked about the main functions - that both sides perceive and comprehend, but that the right side is dealing with whole landscapes, both inner and outer worlds, while the left side, the one that can speak and grasp, is fast and smart, but highly procedural, more like a functional appendage of the right side (the right side's emissary),  but likes to control, and gets angry when its power is constricted or if it feels its worldview has been contradicted. (There are many nuances I've left out here but are really worth the bother of watching the entire video.)
.................................

Anyway, here are a few thoughts for whatever they're worth.
1. Manual therapy is taught as procedural knowing, for the most part. I presume that most people, like myself, are interested in having our procedural knowing backed up by accurate propositional knowing. The sad truth is, most of the propositional knowing that our procedural knowing came saddled with is easily refuted with relatively basic testing. Almost none of these propositions - OK, none that I know of - have held up under scrutiny. E.g., palpation (or any of the things people claim to be able to palpate correctly) has no interrater reliability.
2. Perspectival knowing (putting oneself in another person's shoes vis a vis their lived life) or participatory knowing (being intensely interested in how they feel and being able to feel their feelings, however inexactly, but possible given such phenomena as mirror synesthesia) have been ignored.
3. Personally I favour manual therapy as an avenue for growth in all four areas, but only when certain boundaries are established.

a) prodedurally: do no harm, be that harm nociceptive or noceboic

b) propositionally: get into the right basic science. Science exists to disprove, not "prove." Accept that your favourite "method" may have been disproven long ago. What follows after that is accepting one's role as being that of interactor, not as operator. This may be the hardest thing of all: to take a backseat to someone else's nervous system. Manual therapy as a two-way street between two nervous systems, not just one doing some "procedure" to another, not being a "magic hands" person, not being "the great healer." You have to learn be receptive, and carefully be prepared for feedback through your hands even as you might be doing things with them. Long periods of quiet stillness will permit it to get through.

c) perspectivally: do a lot of reading about life, about other people, other cultures; read a lot of literature, or if you wish, listen/watch a lot of podcast interviews (my favourite way of learning others' perspectives these days).  Stay out of the social media bubbles. They can trap you into wrong ways of thinking.

d) participatory: anyone who possesses interpersonal sensitivity will likely have enough of this to get by on. Psychotherapy is as full of "methods" for counseling as manual therapy has "methods" of treating for this or that kind of pain felt in a body part. Even if you lack intrinsic capacity for sensory empathy or mirror synesthesia, where you can for a brief period of time feel someone else's "pain" in your own body, you can still learn compassion; compassion, like wisdom, can take a lifetime to develop. However, there are ways to learn the basics of almost anything from books or from other people, through communicating and reflecting.

4. I think all the bits of propositional knowing that go with standard conventional manual therapy training, even though they are largely incomplete and/or completely wrong in the light of modern neuroscience, are still passed on because it's convenient for the schools to do so and because the left brains of all teachers and students get rattled and angry if they aren't. To be fair, it's true that we learn to do by doing. I mean, I learned that as a child in 4-H class in a farming community. However, nuances must be examined and contradictions pondered, in any walk of life, perhaps especially in a walk of life like manual therapy in which so much that is obsolete must be tossed.

But we have to tweak it until it gets to be more like this.