Once in awhile, a little, formerly struggling part of myself surfaces and breathes, then disappears again for ever-lengthening periods of time. It surfaced this morning, and we took a look at our life together. I found I could understand and look at life from its perspective better than I could before.

It is the anxious part. It's the part of me I fought to stay married to, the part I turned my whole physical existence upside down and inside out to accommodate. I didn't blame it when it threatened to explode - I listened, stayed connected, tried to understand, then analyzed, and then acted. I thought things through while in Hawaii. I related to this part of me.

I do happen to view my "self" as a committee comprised of different characters, a choir of different voices, a community of selves apart from the one I normally inhabit as "me." I'm not sure this is pathological, although it might seem a bit odd. I have always seen my"self" this way, as a group of individual proclivities and interests, some of which can interfere with others at times. I've always seen my "self" as a collective comprised of "selves" of different ages and capacities and likes and dislikes and abilities and inclinations. I do feel like I have to actively integrate all of it ongoingly, most of the time, and need a lot of alone time to deal with it. I do sometimes resent the disproportionate amount of time this seems to take me, compared to how easily others seem to hold them "selves" together, but usually don't allow it to particularly bother me.. I just plug along with whatever I've got going on at the time. I do wonder about aging, how this process will be affected. Will it get easier or harder? Maybe every person feels like a whole tribe on the inside. Maybe others have brains that do this integrating effortlessly and non-consciously (it seems that way from the outside, at least..). Maybe this is way more information than anyone else needs to know about what goes on in my particular head.

Whatever the case, back to the anxiety "self":
It poked itself into my conscious awareness today, to announce that it feels better now, thank you. It noted that it is Hallowe'en today, which means that it's nearly November, a time when life would normally be dark and rainy and foggy, that it would ordinarily be fixated on the weathercaster's daily announcement of time of sunrise and sunset, would be poking me frequently, as daylight shortened and darktime lengthened. It noted that here, in the new place, in the 'land of living skies', the land of planetary hemisphere-size sky, it could care less, pointing out that it has paid almost no attention whatsoever to weather reports. It doesn't care anymore. It has more light and that's all it ever wanted, so thanks. It doesn't feel it needs to intrude on me anymore about light level issues. I agreed. The thank you was mutual. Both of us love the fact that we do not have to re-set the clock, now or forever more, if we don't want to. Saskatchewan very sensibly did away with this noxious stress-producing, imposed from without, jet-lag producing practice many decades ago. Such a relief.

Meanwhile, there are other internal fires to fight... The part I normally regard as the working part of me is still healing from the rippage away of what was once ordinary existence, and sets of daily habits. It has yet to find a new rhythm in life that is as productive as life used to be, but slowly it feels better and better. It knows that the only way to get through the rest of this year will be to get through the rest of this year, doing little more than attending to each moment as a suspended entity, experiencing life as a crawl by.

The part that had been longing for a sabbatical now has one, but experiences time as whipping by too fast to be enjoyed. It's the part which, if I allow, thinks it needs markers, things to weigh time down, to slow it down. Material objects and bought items, "stuff", money-wasting burdensome symbols of ownership, permanence. I've put a stop to most of that. It will have to find some other way to express itself. I cannot even buy a book right now - the wounds of having had to scuttle almost my whole library are still too fresh. I am firmly convinced that, on the whole, simplicity is preferable, but the acquisitive "self" is having a few issues with me over that. So, I might take it out today to purchase some winter boots, get it a flu shot, buy a bottle of aspirin to feed it, one per day, so it feels provided for and I will have simultaneously reduced the statistical probability of this "self" giving us both/all of "us" a stroke.

What I once felt was a somewhat budding and growing intellect is dormant for the time being. I'm still tending it, but it is ignoring "me" at the moment - it seems to need to compost for now. I hope it springs back to life someday. I see no reason why it won't. It's time for engine maintenance, is all.
Posted by Diane Jacobs at 9:46 AM No comments:

Scientific American has this little item: The Chemistry of Information Addiction: A new experiment reveals why we always want to know the answer

Dopamine reward pathways appear to be involved. This ties in with Robert Burton's ideas in his book, On Being Certain. Certainty becomes a rewarded cognitive behaviour, and voilá, becomes an end in itself.

QUOTE
"It has long been thought that there are two levels of decision-making: a conscious level taking place in the cerebral cortex and an unconscious level in the basal ganglia. The story is not so simple, he says, because these two systems are connected via the midbrain dopamine neurons. Perhaps future work will reveal how our conscious and unconscious decisions are influencing one another, all due to this very busy population of dopamine neurons.

It’s often remarked that “ignorance is bliss.” However, when you look at ignorance from the perspective of the brain a very different picture emerges. Our brains, and the brains of other animals, have evolved to find information rewarding. In fact, not knowing is stressful, which is why we strive to decrease that uncertainty whenever possible. We want the information and we want it now!"

So here's a thought, based on something else I read today, Scientists Locate Literacy In The Brain With The Help of Former Colombian Guerrillas, which I think ties in.

Anyway, language is intrinsic. Children left to themselves soon figure out some sort of "language" in which they will be able to communicate. Even deaf children. Such made-up languages will have grammar, structure, meaning, etc.

Reading, on the other hand, is tuition-intensive learned behaviour. It changes the brain. Excerpt:

"Previously, it was thought that the angular gyrus recognised the shapes of words prior to finding their sounds and meanings. In fact, the researchers showed that the angular gyrus is not directly involved in translating visual words into their sounds and meanings. Instead, it supports this process by providing predictions of what the brain is expecting to see."

In lots of other posts here I've taken a close look at this idea, that the brain is a simulator, plays a predictive role based on previous experience. It is the standard science-based working model of the brain.

My thought is, "making stuff up" to satisfy information hungry and addicted pathways, would likely represent the default human capacity.

Science and learning to think scientifically, like acquiring literacy, requires much more input and effort, initially.

However, the acquired skill is self-rewarding, in the same way as reading is.

Reading has become the norm. Like reading, science must be taught, conveyed, and ultimately learned. It's a transmission of "information" between two people, a teacher and a learner, like any sort of information exchange is but more formal - the people are in roles. Effort expended to either learn or teach is considerable.

Something is wrong with how science is taught these days. Perhaps teaching science as a "tool" seems boring and laborious to a child or teen. Perhaps the teachers themselves find it boring to teach science, or can't quite see the point of trying to pound science into what seem like thick heads.

Does anyone else think science could or should be reframed as an exciting, cognitive, future self-rewarding behaviour?

I will lay odds that if teachers took on their task of teaching science as enthusiastically as they take on teaching basic reading, fueled by the same motive, soon there would be a leap forward in percent of population able to steadily access their own information-seeking/gathering reward pathways. New habits of thinking would emerge. Culture would change. There would be no more need in life to support institutions that "make stuff up" just so they can feel they can help people get by - everyone would be interested in investigating the truth as closely as scientifically possible.

It's excellent novel stimuli to this brain that houses me.
Brain food.
Today, outside my window, a blizzard! a real, honest-to-goodness prairie blizzard! ...rages.
Maybe it's the exciting descriptors that pull me so much into this situation, back to living in a little prairie city that has nothing much to distinguish itself.. where any architecture the least bit interesting dates back to the 40's, or 30's.. 20's..

No matter - the weather is wild, the weather is fresh, the weather is waking my brain back up. I do not fully understand why I feel like a coma survivor - I just know that I feel something waking up in here. I'm going to go walk around a little bit out there.
Posted by Diane Jacobs at 7:59 AM No comments: 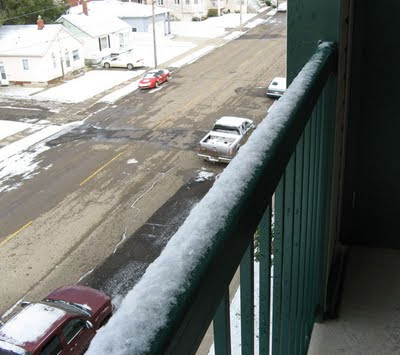 I feel like a kid again. Just for this feeling, it was worth moving back to Sask. Snow fell last night and this morning, not much - just a skiff, but it feels good. I can feel my sympathetic system stirring after a long long time of not having been stimulated kinesthetically in this way, expecting to have to struggle just a bit. The light levels are strong. So the accommodation reflex of the parasympathetic system of the pupils is back in charge, telling the sympathetic system to not dilate pupils. What a kick this is, light-wise. My brain likes this.
Posted by Diane Jacobs at 10:38 AM No comments: