This whole past weekend I was in Saskatoon staying with a friend and her family in their home; I volunteered to be rapid-tested a couple times in the process to make sure no covid bugs were present in the posterior wall of my nasopharynx.
I did my own swabbing, which although it did not hurt in the slightest, was exceedingly tickly.
I do not think I could have tolerated anyone else doing that to me - so ticklish.
It brought tears to my eyes as it was.
I expect that one's sensory nervous system would easily adapt to repeated testing, however.

The snot-drenched swab is put into the little test tube and five drops of reagent is added, left for a short period of time, then dabbed on the tester. The strip at the bottom turns pink, which disappears, and a line is left. Or if you are positive for coronavirus infection, two lines are left. 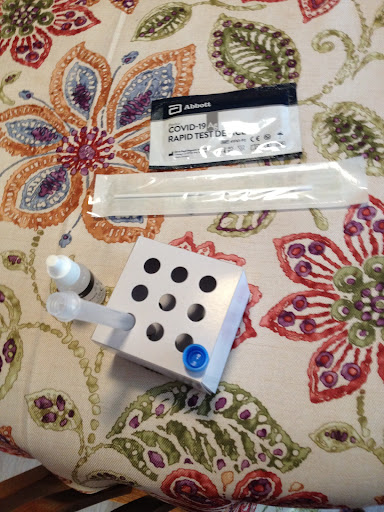 The kit set up 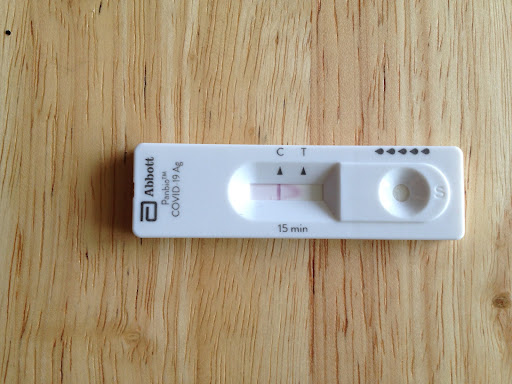 My negative test result.                  Two lines would indicate a positive test.
...........
So, why was I in Saskatoon, invited into somebody else's personal covid-free bubble?
This particular friend had proposed a reshoot of my entire online dermoneuromodulating class at Embodia with a professional film company. She found a space, handled all the logistics, food, everything, including looking after me, most spectacularly and efficiently. She made sure that all who attended the presentation/overview were double-vaxed and masked, including the camera people.
There was a brief moment of concern when one of the attendees notified her that his girlfriend had tested positive (which is why I took a second test) but as it turned out he tested negative, so we carried on and completed the entire shoot over the 3-day period.
The camera guys were great, and their lighting and camera equipment impressive. The mic was clip-on, very tiny, and the battery box so small that it and the cord fit easily inside the front of my bra, totally invisible. They used to work for a TV station. It was evident that they were pro, the way they moved around completely silently and signaled to each other with just hand signals.
On occasion, a train would go by out back, and they would stop me until it had passed out of earshot. But remarkably (and thankfully) that did not happen very often.
...............
I have come to realize (with slowly growing horror) the extent to which my own profession (physio) is in the process of being taken over by the chakra belief system. A glimpse was gained when an individual I was chatting with used a chakra framework to discuss her neck issues.
A physio. A yoga physio.
I don't care what people do with themselves or their own brains on their own time, or what they "believe," but I really do not think their belief systems should be imposed on my profession. I want my profession to be science-based. Maybe it never will be.
I guess I must have been unaware until just this past weekend how deep chakra talk has permeated into the way (probably all yoga-physios) think and speak. Such a slippery slope from there into operator notions of "energy" and "healing." Exact same BS as the massage profession is up against. I have intense disturbing visions of physio becoming awash in crystals and all the other crap that goes with chakra BS.
I don't know how to deal with it.
I mean, I guess it's less (overtly) harmful than the way my profession was taken over by the bone-cracker mentality 40 years ago.
But it may be ultimately MORE harmful in that it uses the same mental shortcut pathways (exceedingly UNcritical thinking) PLUS, it comes all draped in gauzy "spiritual" flowing robes of metaphor, more insidious, less easily dismantled/disconfirmed by scientific investigation.
Sigh.

I may need a new and better cognitive weed-whacker.

Posted by Diane Jacobs at 8:40 AM No comments:

Every so often on Facebook you see frames pop up that can be added to one's profile picture. I saw one I liked and added it - programed to go bye-bye in a month. 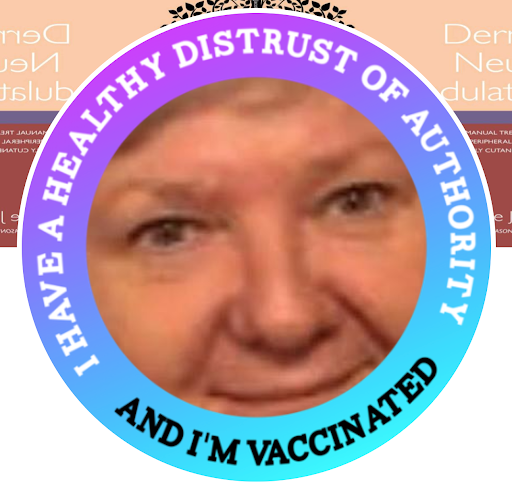 If any group of humans understands that life is a verb, not a noun, it's actual scientists.
They get that things, like viruses, like life itself, evolve. They try to keep up, they don't impose. They know they'll never be completely right about anything but they always strive to be less wrong about everything.

The ones who impose, the ones who are authoritative, are those we elect to lead us. Hello? WE elect them to lead us!
And from whom do they seek information on how best to lead during a pandemic? From effects of climate change?
From science, we hope!
That way we can all stay together and move as a large group in hopefully the right direction at the right times, stay nimble against threats to our human collective existence. It's a pretty good system, democracy is - it allows authority/authoritarianism to spread out and be dilute as possible among as large a group of individuals as possible while protecting the body politic from as much die-off as possible. Because you see, authoritarianism is always in there as a default brain thing - but how we organize ourselves in groups will either ameliorate or exacerbate it.

Speaking of authoritarianism, I also made this little picture: 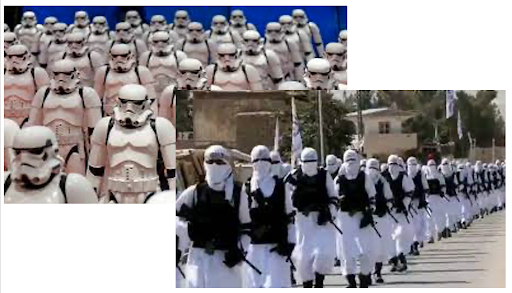 The pic at the back is of soldiers from the famous Star Wars movie, and the one at the front was taken just yesterday or the day before, of the new regime in Afghanistan. To me, there is a striking resemblance.

There is nothing on this earth more authoritarian than a collective of males banding together to save themselves from the verbs of life by trying to turn everything into nouns to be defended or vanquished.
By them.
They keep for themselves alone the right to be verbs and everything else becomes a noun to be manipulated.
Meanwhile they are "salvationed" from having to think for themselves because they take orders instead from whoever feeds them and gives them uniforms to wear. They can go back to being dependent babies in some ways.
They crave certainty.
Insecure people don't see existence as a human as being an active agent who has learned to surf on a moving body of water. Instead, they want solid ground. They want to turn everything into rocks that they can pick up and throw. They are vulnerable to wanting authoritarianism to dictate to them what to do with themselves. They want religion to tell them the answers to life's conundrums. They want to blame the world and everyone else in it for their own personal existential angst. Especially they blame females, because perhaps they just can't reconcile with the fact that they came out of one of those "others" and find the very thought rather horrifying.
...............

So many examples of this tendency in the human primate brain - well, for sure the male human primate brain, because males are very homosocial and they love to dress up all the same so that as a group they look more foreboding/less human.
Women perhaps not as much. We prefer to remain individuals I suspect.
.............

A third thing I saw today that reminded me of authoritarianism was a post from Adam (Manual therapy sux!) Meakins, who I've spoken of before here and here. 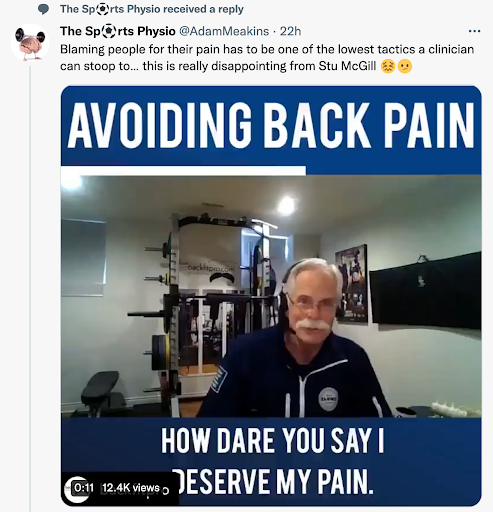 So, who's the authoritarian here?
What is the background to all this?
In my mind, I put Stu McGill and all of chiropractic and all of orthopaedic manual therapy and most of orthopaedic surgery all in the same boat: those who subscribe to it want nouns they can manipulate, not messy changey verbs that are like water that they cannot grasp.
They are transfixed by skeletons. They love bones. They sit there and puddle around with individual vertebrae in front of them on the desk, fitting them together, pondering for hours on how they move, what stops them moving, trying to design systems of thinking, algorithms for manipulating them, and assuming (this is the important bit) that somehow those bones not moving on each other is what pains people, not that pain might be something (in the nervous system!! Hello??) that stops them from moving.
And from that, they built themselves quite the authoritarian world to inhabit.
One that I examined for a time, quite casually, then, in the end, rejected as pseudo.
In case you haven't figured it out yet, I am anti-authoritarian in most aspects of life. But not in a meaningless way.
I got the shots and I wear a mask when out and about.
I enjoy freedom but not free-dumb.

⁠A couple weeks ago I wrote about the fun tennis match between Adam Meakins (manual therapy sux!) and Chad Cook (manual therapy is unfairly demonized even though I have taken great scientific pains to point out its shortcomings).
See part 1 here.

Edzard Ernst has given the Cook paper a good looksee: Here is his take.

Here is my favourite excerpt:

"Cook’s defence of manual therapy is clumsy, inaccurate, ill-conceived, misleading and often borders on the ridiculous. In the age of evidence-based medicine, therapies are not ‘demonized’ but evaluated on the basis of their effectiveness and safety. Manual therapies are too diverse to do this wholesale. They range from various massage techniques, some of which have a positive risk/benefit balance, to high-velocity, low-amplitude thrusts, for which the risks do not demonstrably outweigh the benefits."

My bold.
I like to think that the kind of manual therapy that I spent the last 35 years of life practicing and the past 20 developing into a nervous system and pain-science-based approach to treating patients, and also decluttering minds, falls at the positive tip of the spectrum of effective and safe, as far as possible away from the orthopaedic manual therapy uncomfortable pop-em end. 😎

Posted by Diane Jacobs at 8:49 AM No comments: