A touristy day in Lahaina, Maui Part I 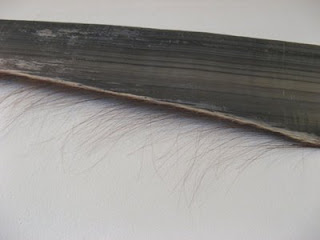 Today I had some energy to waste - such a luxury. I decided to be adventuresome and take the bus to Lahaina to see the Banyan tree. I saw it, and saw a great deal more as well (more about it later).

Took lots of pictures but most of them are pretty much a big yawn. Found a museum in the "Old Courthouse" that had one room devoted to the whaling industry, and taking photos was not prohibited, so I took shots of this and that. There was plenty of rusted out whaling and sailing paraphenalia there, and framed photos of how the blubber was removed from whales then cooked ... all kind of saddening, so I moved along. On one wall was an actual flipper or something, from a whale. (There was no explanatory sign that I could find.)

I was somewhat surprised to learn whales had hair on their flippers. I mean, I realize they are mammals, but I thought they did not do hair. They don't do hair the way seals do fur. It made me wonder if dolphins have hair.

Hair increases mechanoreception. It must make whales (at least this species, which I think are humpback) more sensitive to both their own movement and the movement of the environment against them. I've attached a picture of the whale part with hair.
Posted by Diane Jacobs at 8:31 PM