A touristy day in Lahaina, Maui Part III: my salute to the Hawai'ian flag

Ever since I got here I've seen lots of flags - Canadian, American, a blue one which I have yet to learn about, and one I learned about today, the Hawai'ian flag. Here is the history of the overthrow of the Hawai'ian monarchy by the US, from the point of view of the Hawai'ian indigenous people. In 1898, the Hawai'ian flag was lowered in a ceremony conducted by Arthur Waal, the postmaster, and a US flag was put up, right in the courtyard of Lahaina, where the banyan tree imported by the missionaries lives. In 1998, Hawai'ian pride rose, and the flag was resurrected at a ceremony marking the hundredth anniversary of its displacement.

This link depicts the flag's design and what is represented by it. This Wikipedia link mentions that

"The flag of Hawaii (Hawaiian: Ka Hae Hawaiʻi) is the official standard symbolizing Hawaii as a U.S. state, as it previously had as a kingdom, protectorate, republic, and territory. It is the only state flag of the United States to have been flown under so many various forms of government and the only to feature the Union Flag of the United Kingdom, a relic of the period Hawaii considered itself a British protectorate (1794–1843)."

At the museum today, I saw the original, the one that had been taken down in 1898, by the postmaster of the day, Arthur Waal. I've included my little photo of it, framed and in the museum in Lahaina. 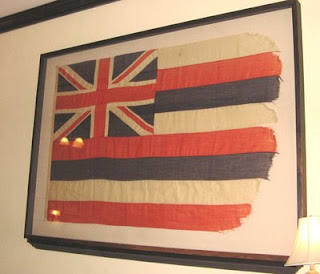 The story that goes with its return made my eyes wet, and still does, even now, hours and hours later. 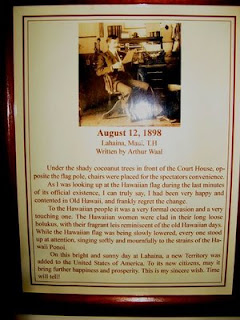 First, we have the reluctant postmaster, ordered by his country to do some dominating behaviour to do with exchanging flags. So, he does. As graciously as possible.

He writes about the event in a way that suggests he was of very mixed feelings about the whole idea. He describes the solemnity of the Hawai'ian people as they see their flag come down. He feels for them. Here is a piece he wrote about it, after the fact. (Hopefully the picture will enlarge if you click on it, so you can read his words.

Long story short, he takes their flag back to California with him, and looks after it. Presumably he dies at some point, and his son is given the job of looking after it. Perhaps the son, Arthur Waal Jr., is in a clutter-busting mood one day, or perhaps he gets wind of Hawai'ian Pride starting up... in any event, he contacts the appropriate authorities, and offers them back their flag, the original.

Fast forward to 2002. New ceremony. A Hawai'ian woman, possibly a relative of the old royal family, in any case, a Kupuna, an esteemed elder, Pua Lindsey, makes a speech, is given the flag back, and in the process of accepting the flag, tenderly puts a lei on it, and thanks Mr. Waal for having taken such good care of it all this time. 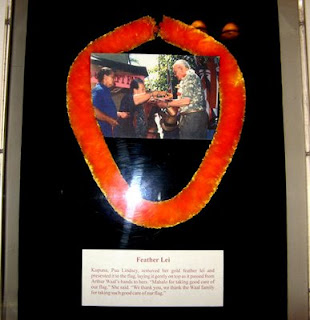 The lei is no ordinary lei - it is a luxurious beautiful stunning lei, about an inch and a half thick, constructed entirely of soft golden feathers. Here is the picture of that, to the left.

There is something about someone laying a soft infinitely gorgeous feather lei "gently" on a tattered flag - the original flag that came down when their sovereignty, their nationhood, was rudely yanked away merely to smooth out business bumps - the kindness with which the flag (if not the sovereignty it symbolizes at least the physical object itself) was restored by this man, this son who may have noted his father's sense of helplessness, perhaps even sense of guilt, who enacts a ceremony that likely gave him as much personal peace of mind as it evidently gave this gracious group of people who received it back so lovingly... there is something about this gentle action toward a physical object that symbolizes a nation and its betrayal, at the same time, that reconciles opposites somehow, that is a forgiveness and a redemption.

Something about this event makes me feel something, powerfully and fully, gives me goose bumps, makes me think that members of the human race, in spite of its many warts, can do some really beautiful things for one another. It all has to do with that word, "gentle," which seems synonymous with "noble" somehow. Which is more noble?
1. To give back something that never was yours to begin with? Um... no... it is kind, but not noble.
2. To accept that stolen object and all the betrayal it represents, back, in a very gracious way? With a simple, gentle action that simultaneously forgives the representative of the wrong-doers, forgives those ancestors who were duped, demonstrates loving regard for everything once attached to the original meaning of the object? But that lets go of the past? That lays "nature" (symbolized by a beautiful splendid lei) on top of an artifact of a civilization that once was? Without animosity? Yes. In my mind, this is "noble."

"Gentle" is how I've striven to learn to do my hands-on work and have succeeded. It's how the weather is here (mostly). It's how the flowers are here. It's something that ties in with how that child danced at the luau. It's something that was once cultivated as a desirable trait in people. I think I feel nostalgic for it, and would like to see the human race get back to valuing it again. There is something tremendously powerful and for today, at least, in my mind, interchangeable about "gentleness" and "nobleness" that has been buried deep beneath "might is right" for way too long.
Posted by Diane Jacobs at 9:13 PM

Arthur Waal Sr was my grand uncle. I think it was "noble" of him to keep the flag ... it was not stolen ... he took it and saved it for the Hawaiian people, whose Kingdom was looted by the Americans. Uncle Arthur lived the rest of his life in Hawaii -- Lahaina where he was postmaster for over 15 years, and later on Oahu. Preserving history is noble. I am proud of my uncle and my cousin, who after over ten years of trying, finally got the reluctant museum to accept his father's archive.