Almost back to normal. I can now sleep comfortably on all sides.

I am including a picture of a slide I made for a presentation in June - it contains a very intriguing cylindrical 3-D image of how convoluted a nerve (which just happens to be musculocutaneous) is, inside its tunnel. They really do look like roots.

It's important to bear in mind these are comprised of neurons, each one of which, if its soma were the size of a tennis ball the axon would be a half mile long and the size of a garden hose, according to Jack Nolte, a neuroanatomist. Well, OK, he was talking about a motor neuron, from the spine to the big toe, but you can see the proportion. Maybe in the arm we'd be talking a quarter-mile long. That would still be a pretty long garden hose. 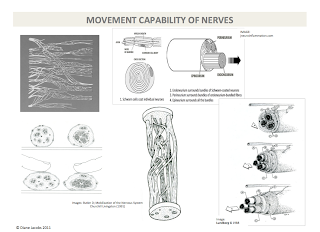 One can imagine that unrelenting stress on a noodle-y system like that would affect its vascular supply adversely. Eventually. One can think of adaptation, I think, as a bunch of nested buckets. The mechanical stress would be like a slow drip into the center smallest bucket; after a time it would overflow and the next bucket would start to fill. It might take a long time, but eventually, the last and largest bucket would fill and spill - then the system would mount an alarm strong enough to get one's attention. I think that's how it went down in my case.

I managed to find somebody to help me empty out the buckets again. Whew.

Yay for you and your return to normal you-ness. Always great to hear of people using their interlect and knowledge to act wisely.