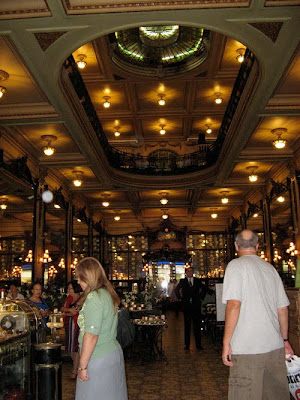 With the workshop over, I had a chance to see old downtown Rio, visit an incredible pastry shop (see photo), and shop for a new shirt in Ipanama, fashionista that I am (not), with Adriana (Palmiro's girlfriend), a very nice woman with her own practice there.

I had been staying at the Vilamar Copacabana Hotel a number of days before I realized how close I was to Copacabana beach - only about three blocks. I didn't wander around by myself, thanks to Palmiro's warnings; when I did go out, it was usually with him or with other designated handlers, to some preplanned place for a specific task, so I had no clue the ocean was only meters away. On my last evening in Rio a small group of us went out to eat on the beach, and it finally sank in how close it was. We ate in a tent restaurant, right on the beach, the worst food I experienced in Rio (where the food was ordinarily fabulous) - dried out chicken and fries and watered down drinks, a too-loudly-miked-and-guitared singer singing Stairway to Heaven and other old songs, (annoyingly) in English.

The highlight of that last evening was insisting we walk down to the edge of the water, where my feet and the Atlantic ocean finally met and could greet each other. It was dark; a few lit-up ships sparkled in the distance, the air was still, the waves full and slow and warm. We couldn't linger though - the one slightly-built 20-something guy with us was nervous - possibly he had visions of his little flock of older foreign female responsibilities being total mugger bait, might have been overcome by the thought that he wouldn't be able to protect all of us all by himself. He soon wanted us to go back up to the street. So, an excellent moment, one of those rarest of moments that seems to hang suspended all by itself in eternity, one I wish could have lasted a lot longer, was over, and we walked back.

Next morning we were all up early to catch the plane to Fortaleza, 4 hours north, on the north coast of Brazil very near the equator. I had my first ever Congress presentation to make the next day, and stewed over my slides some more on the plane. I sat beside a nervous woman in the window seat who had never flown before and wanted the window cover down the whole time. Palmiro was on my other side. I was informed that Fortaleza was a dangerous city, that people had started noticing that plane loads of men came from everywhere just to buy sex with children, that authorities had begun to deal with the problem. When I asked how large the city was, I was told it was "just a small city," maybe 2 million. (Two million is huge in Canada. Double the entire population of the entire province of Sask. Oh well.) As it turns out, the size of Fortaleza is more like 3.5 million if you count in all the burbs. 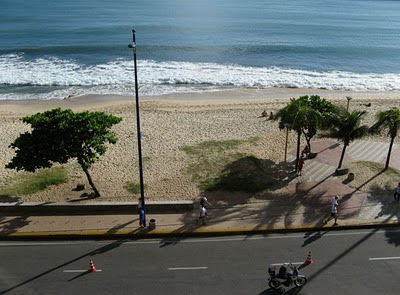 What I was completely unprepared for and made me ecstatic was finding out the hotel faced the beach and that I had ended up in the ocean-facing side. I was able to look out every morning and say hello to this roiling turquoise marvel, right across the street from my 4th floor room.

Next, the congress.
Posted by Diane Jacobs at 5:20 AM