I had to get to Rio by flying to Sao Paulo on Air Canada and catching another local flight. The first flight was all night long (9 hours) and covered over 5000 km. I fussed over my slideshows some more and managed to curl up horizontally to sleep, as I had no seatmate. This nice part about flying north-south or south-north is that no jet lag is involved. It was the first time I'd ever been outside North and Central America. I'd never been south of the equator before. So many firsts.

Dinner (with wine) was served on the plane, and shortly thereafter, breakfast. The coolest part of the trip was that even the economy seats have a place to plug in one's computer so that one's battery stays juiced.

I was nervous landing in Sao Paulo. It seemed to take an hour just to fly over the city through smog cloud to get to the airport. It's 20 million people large, after all. I expected the Aeroporto Guarulhos to be enormous (it was), and I'd learned no Portuguese, hoping my rusty Spanish would suffice. How would I find my way around? I didn't have a lot of time between flights. Fortunately, customs there is a perfunctory matter, one's immigration card is merely glanced at, lines move fast, most of the people in uniform speak a bit of English, and there are many many people in uniform, standing around, changing the cloth bands between stands to facilitate new lines and faster movement. The signage is quite small and the distances huge. I did the default female thing and kept checking with new people as I walked along to make sure I was still going in the right direction. I reminded myself that I was English-speaking in a Brazil airport, not Polish-speaking in a Canadian airport.

Eventually I got to the proper gate in the correct wing of the port and on the TAM plane for the 45 minute local flight to Rio. At the Rio airport, things were even more brisk and easy. Palmiro was there to pick me up, so I could finally relax.

First things first - it took a good 45 minutes to get from the airport to the hotel, through Rio traffic. Rio is another huge Brazilian city, about 12 million. It has a bit of a smog bank too, although Rio citizens choose to downplay it. So beautiful though. In the car I was given a lesson on the social stratification of Brazil, and how to stay safe, not be a target. Palmiro has been around some and has had a chance to observe how life is in North America, so he took great pains to inform me about how in Brazil you can be killed for your cheap ten-dollar watch. He wasn't trying to scare me, just protect and inform me. I listened.

That evening I was introduced to caipirinhas and the sort of steak I can't ever remember tasting in my life. Delicious. Then we went up SugarLoaf Mountain in the cable car, in the dark, to see the lights of Rio way down in the distance. The next day we saw it again, in daytime. The other main tourist spot is Corcovado, on top of which is a giant Jesus statue. 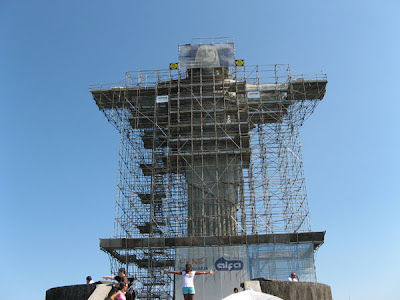 Giant Rio Jesus is apparently suffering from acid rain, was covered in restoration scaffolding when I visited.
The mountain is so high and the smog was so dense that I couldn't get any pictures of the city - I could not even see the city. On the way down I took a bunch of pictures of a very dilapidated but still beautiful and elegant hotel, which is slated to be restored in time for the Rio Olympics, I think. 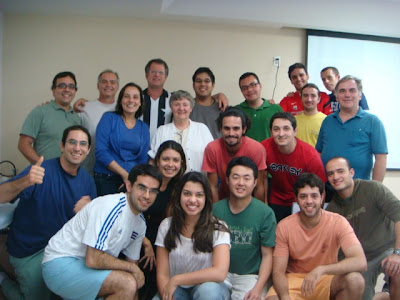 On the weekend I taught a two-day workshop to 26 people, the largest class I have ever taught. Palmiro had translated my treatment manual in Portuguese himself, ahead of time. A translator had been arranged. It couldn't have been a better organized event and it couldn't have been filled with better, more attentive, gentle students with hands like butter and minds like sponges. By the end of the second day several had already left to make flights etc. Here is a picture of who was left. Palmiro is in the back row, second from left. The translator, Dan, is beside him third from the left.

I learned to do Brazilian cheek-contact air-kissing on this first leg of the journey. I was struck, actually, at how contactful the culture in this branch of my human primate social troop. Such a welcome somatosensory, epicritic input.
Posted by Diane Jacobs at 5:53 AM