I get it. Nothing in life is perfect. Everyone makes mistakes. I make mistakes.
But gee, I hate when scholars (who are supposedly held to higher academic standard) get careless and (OK, maybe inadvertently) mislead those of us who come along later and read their papers.

I found another example of one of those little things in life that makes me want to tear my hair out, and am wondering to myself, is it me, being slightly obsessed about OneLittleThing among all the millions of ideas that are wrong in the world? or is it a real thing that sticks itself in my face repeatedly and I have not just the right, but an obligation, to complain? Even if it's only on a blog that nobody reads?

The issue: referring to astroglia as immune cells.  Wrongly.
This is not the first time this issue has reared its head in my face.

I saw this, in a paper I had just started to read.


I was taken aback.

The possibilities that existed were:


a) Another paper, another author, was telling me I had learned glia all wrong.
b) The author was wrong.


So I decided to check the references. 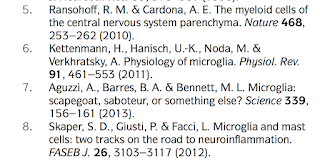 The Ransohoff paper  is very long and very carefully points out the history of the arguments re: family background of each kind of cell, and why the conclusion is that microglia are immune cells of mesodermal origin.
There is not much in there about astrocytes, other than a diagram that points out that they are non-neuronal brain cells of ectodermal origin. The paper is focused on microglia.

I read the whole thing.
And was reassured that I had learned embryology correctly, at least where glia come from.. it's kind of important to know, in the long run.. which is why, presumably, so many people have sat at lab benches spending their entire precious lives trying to figure it out and finally succeeded.
.............

Lots of people tell me that it doesn't matter, that I shouldn't be bothered by what is of ectodermal origin and what is of mesodermal origin.
I disagree. Drawing a conceptual line between them has helped me hugely.
.......

I thought scientific peer review was supposed to catch mistakes like that.
Maybe nobody cares, except me, and all the embryologists for whom it matters most directly.
.............

Anyway.. same with the other three papers, two of which are open access. Nothing about astrocytes. They are only about microglia.

So, my question is, Why on earth would Dimitris N. Xanthos and Jürgen Sandkühler use four references that have next to nothing to say about astrocytes, and are overwhelmingly about microglia, to back up a sentence in which they calmly state (incorrectly) that astrocytes are immune cells?

The paper with which I have an issue:


The papers used as reference:


Too bad the first two papers are behind paywalls, or one could follow along. In the Skaper paper #5,  “glia” are mentioned as if they were all the same; because of sentence construction, it is left unclear as to whether the author thinks they all are immune cells:

“The emerging realization is that glia and microglia, in particular, (which are the brain's resident macrophages), constitute an important source of inflammatory mediators and may have fundamental roles in CNS disorders from neuropathic pain and epilepsy to neurodegenerative diseases.”

That sentence could be misconstrued to mean that all glia are macrophages. Maybe it's just poor writing. Maybe it was this paper /that sentence specifically, that confused Xanthos and Sandkühler. But still, you'd think the Ransohoff paper (#2) would have clarified things, and prevented them from making an erroneous declarative sentence, had they read it more carefully.

What to do? Accept that life is a confusing mess and then we die?
Can't do it. That is unacceptable. Somewhere somehow I have to blow gently on the tiny flame of hope, keep it alive, the hope that one day, science will be able to sort mess, discard mistake, hold up fact; that scholars and authors don't just pad out their own confirmation biases with references that don't even support their statements.
But when I see a mistake about something I do "know," highlighted against the vast darkness of ignorance I still have, that we all still have, I worry about whether I should trust anything that particular individual says about anything.
And I blog, because it relieves despair and stress and anxiety a little bit.
Not much though.