The day before yesterday was a one-day seminar with Lorimer Moseley. I managed to live tweet quite a bit of it. So I thought I might take a slightly longer break from the Melzack paper, bring the tweets, try to match them with the papers. I didn't always get the papers tweeted in the heat of the moment. Here is a list of all articles related to the seminar. (Some parts of the presentation were about material not yet  published, so tweeting about them was disallowed.)

[I.e, it isn't always necessarily about "pain" - there are disturbances in sensation in general and interoception, proprioception.]
[Hilarious yarn about stealing rubber arms from some facility - Ming created a distraction by making a loud Uhhh sound, then abruptly stopped and ran away.]
[References included Henrik Ehrsson. See Ed Yong's blogpost, Out-of-body experience: Master of illusion, with a podcast interview embed to learn more about Ehrsson's fascinating work on dislocating sense of self from various brain systems, including the autonomic nervous system.] This just in May 29: Extending the self: some cold truths on body ownership [includes a video, about 3 minutes].


"Last year, researchers Lorimer Moseley, Alberto Gallace and Charles Spence introduced the idea of the “body matrix” in relation to this question. The body matrix, as they described it, is a multisensory representation of our whole body and the immediate space around it."

[The brain will literally make obstacles seem larger, heavier, higher - goals seem further away. This is all in accordance with large amounts of perception research.]
It's VERY hard to un-see a visual illusion. The brain decides quickly, based on clues it has internalized through evolutionary time, such as light source, where the ground is, etc. This applies to all systems, not just visual, because of built and sustained neurotags.
[By the way, "neurotag" is just Aussie for "Neurosignature," coined by Melzack. Neurotags look like graffiti tags, or doodles in the brain - hard to remove.. is that a buried linguistic connection? I think it might be..]
There isn't any specific cut off neuroanatomically. I asked. I would call these loops the relationship between critter brain and human brain, myself. "Cortical" isn't limited to merely cortex, in other words - it can refer to anything, any loop above foramen magnum, but I think we have to remember that long dock out into the ocean of the body and the body's physiology, also known as the spinal cord. It's still CNS after all..
Pain isn't a noun - it's a verb! And it looms, because normal precision-creating inhibition decreases.
Yes.. there are quite a few papers related to how abnormal findings shouldn't be an excuse for surgery, because they can be found in asymptomatic people too - just like grey hair or wrinkles.
Such a lot of exciting possibilities for mapping of space.
This is from work done on CRPS, I think.
On to glia!
This relates to the exciting work done by Seth Grant who showed that synapses (with their glial control) may drive evolution.
This happens when a synapse is used way too much. [Maybe the glia cell starts to get tired? Anyway, this is like in the PNS, where Schwann cells can start to impersonate immune cells by producing cytokines, etc. File under "Neural crest derived cells are brilliant but can get weird"]
I finally understood what this story was about. I think in the book, a big (and critical) chunk must have been accidentally chopped.
It had to do with a music neurotag that was augmented by leaning back against a door handle in a truck, and the position of leaning, and darkness... then playing in a club where the clarinet player (Lorimer) sat on a truck seat replica inside the club, leaned back, and was surprised to find himself playing Orthinology instead of what he should have been playing, which was Amazing Grace.
That would be, central sensitization.
Focal dystonia in musicians is a common problem.
The poster outlining guide to contributing mechanisms.
Antibiotics for back pain: hope or hype? BMJ May 17 G Lorimer Moseley
Graded Motor Imagery (Book Review)
Look to other fields for how they reduce threatening cognitions. Look to Cognitive Behavioural Therapy, Adult Education, etc. 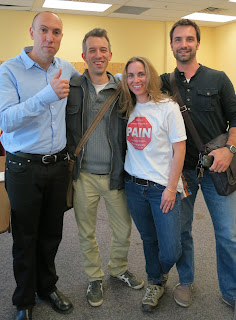 It was a wonderfully full and interesting day. Lots of SomaSimplers were there, all the ones who live in Montreal, anyway: here they are standing with Lorimer Moseley.

The room was packed, mostly PTs. Susan Tupper thought there were at least 10 rows of ten people each, which would be roughly 100 attending.

MORE: Neuroanthropology on Brain Science Podcast Excellent, excellent podcast - Ginger Campbell interviews the authors of the new book, The Encultured Brain. Neuroanthropology: What Is It and Why Should You Care?
The authors point out that the brain is where culture and biology come together and influence each other. An example; about an hour into the podcast one of the authors describes how his vestibular system had to adapt to his training in capoeira. The challenge in capoeira is that it's a martial art form, fought with an opponent, while standing on your head or your hands. Gymnasts do this all the time but they exploit their visual system by always looking to see where the ground is. In capoeira you have to look at your opponent, or risk getting thumped by him/her. The vestibular system is forced to neuroplasticize in other ways. It has to make unusual neurotags.

What does this have to do with pain? It has everything to do with how brains neuroplasticize themselves in relation to inputs. Pain is an output, just like movement is an output. Brains practice and practice until their predictive ability matches what they produce as output. This occurs once surrounding inhibition produces accuracy, precision. After that, the brain has "got it." It has a sturdy neurotag built. Norman Doidge called pain "the dark side of neuroplasticity."

I think, first, you have to pick your parents well. They will be your world for much of the time your brain is busy soaking up your world. Not to mention, you don't want to end up with funky genetics, particularly, or epigenetics. It will help if you are not born into relative poverty/low social status. Emphasis on the word "relative." As long as most of your neighbours are in the same boat, and you have basics (food, clothing, shelter) covered, there won't be any social stigma.
Then you have to not be exposed to violence or abuse in the home, either to yourself or of any primary caregivers you depend on. Your vulnerable child brain will totally load up on stress from watching your mother be battered, for example.
It's great if your primary caregivers hold you a lot, provide long loving sessions of direct skin contact to you when you are an infant. It will help your brain develop.
It's great if you don't get seriously injured too much, yet get lots of exposure to your environment in terms of graded challenge to your immune system, and to your nociceptive system. If you're having fun playing with your peers, your brain will build up robust pathways dedicated to descending modulation of all the right kinds. Having educational opportunities is a very very nice bonus. Brains need to learn how to distract themselves. They need things to practice thinking about. Some sort of music training in addition to cognitively delivered cultural input is great. Lots of exercise too.
If all goes well you will grow up into an adult with a nervous system in good shape, able to do what it needs to do from a bank of successfully mounted resolutions to physically and emotionally generated experiences and challenges.

As long as you have genes that can make all the necessary proteins, your nervous system should be able to get itself out of pain. Sometimes it might need a bit of help, from the culture, just to get it started, but after that, it should be good to go.

Philosophically speaking, it will never be able to be "the way it was before the thing happened", but it should be able to get back to coping easily with struggles and strains without hurting you in the process.