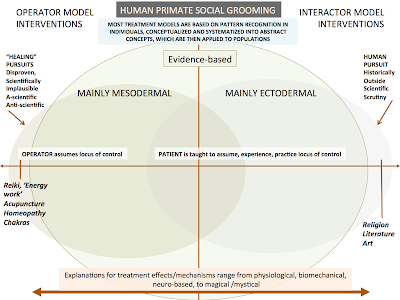 On the left side of the diagram, when peoples' bodies develop a frank disease or trauma, operators step in, save life, save limb, or at least try to. The operator assumes the locus of control.

On the right side of the diagram, when people develop non-life threatening conditions, or are recovering from them, or strive to prevent ill health in the first place, helpers interact with people to assist their learning. People retain their own locus of control; the helpers are viewed more as consultants or advisors. 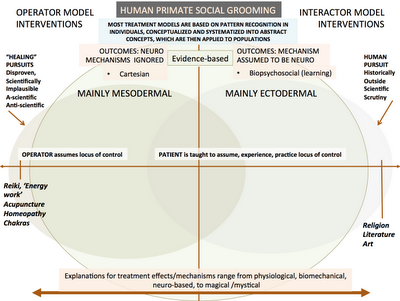 On the left, a Cartesian perspective is assumed; namely, body is viewed as something completely separable from the "mind".  A third party can intervene, ignore the "mind", deal with the "body", then drop back, and magically the patient's mind and body will return to seamless continuity. This is true, certainly, if loss of consciousness is present.

On the right,  a patient's conscious mind/cognizing function is assumed to be intact at all times and part of the entire process. Nothing can happen, really, without the involvement and cooperation of the fully awake and cognizing person receiving the help from the helper. The basic perspective adopted is known as biopsychosocial. No loss of consciousness is involved. In fact, everything hinges on the recipient's attention span, ability to focus, learn, and change his or her own behaviour. 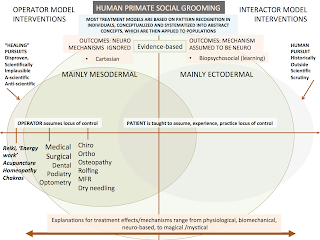 Here we can see types of interventions that could be seen as true operator interventions, i.e., the list with "medical" at the top. In this list, most of the procedures require some sort of anesthesia.

The second list is in the operator side of the picture because the "operators" performing the function have learned to do their work (inappropriately) from a bottom up Cartesian perspective. There is no anesthesia required or dispensed. These approaches could be characterized as coercive, although the operators have the option of learning how to perform them in a more interactive fashion.

The "operators" in this list imagine
1. that they have locus of control,
2. that they are affecting the patient from the outside, the body, in.

In my opinion, they are deluding themselves, and their patients, simply by the way they were taught to think (inadvertently), or else deliberately.  In any case, they (mostly) do not consider the nervous system in their reasoning, nor do they imagine their treatment to have any direct effect on it, or that it might produce different output based on novel input; rather they tend to assume that the work they do on their tissue of choice eventually has been registered positively by the patient's passive nervous system. They allow themselves to imagine they have accomplished something outside the organism's control, and take full credit for getting the job done right. 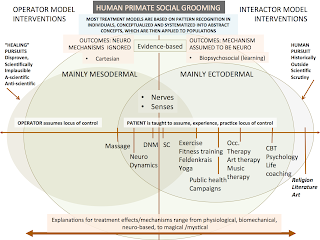 This includes anything anyone does to anyone which involves acknowledgement of the awareness and conscious veto power of the human nervous system, from its most peripheral, to its innermost central aspects. It includes a broad spectrum from the most committed one-to-one physical contact, to hands-off group work, to social programs designed to benefit the entire troop from top to bottom and over time.

To the left we see massage, right at the border between mesoderm and ectoderm, focusing on "muscle" but also on treatment dyad dynamics.
Beside it we see neurodynamics. This is a recently evolved treatment method whereby nerves are slid about through limbs and spines. It evolved out of "ortho", still retains a focus on "tissue", but the main focus is now on pain as an output, so it has moved further to the right, into the domain of ectodermal, of biopsychosocial.
Just to the right of that, we see DNM. This is my baby. It stands for dermoneuromodulation. It also evolved toward the right, and away from operator methods and massage. Focus is on cutaneous nerves, pain as a biopsychosocial brain output. It assumes that non-nociceptive novel input will result in altered (usually less) pain output.
To the right of it, we see SC. SC stands for simple contact, Barrett Dorko's baby. It deals with the peripheral nerves and nervous system as well, but leans a bit more toward different movement output based on novel input.
Beside its right, we see a whole host of exercise schools of thought. Exercise can do wonders for practically anything.
Moving further to the right, we have several examples of purely interactive strategies at group, societal and individual levels.

13. Putting it all together: 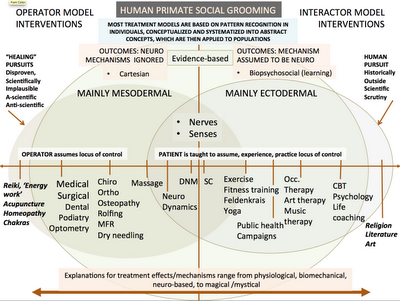 Here is the whole thing, finally. It's a busy slide, may need tinkering, but most of it is accounted for I think.

This is a brilliant distillation of your work!

Hi Diane,
This is a tremendous piece of work!
It clarifies some of my misunderstandings and really helps a lot.

IMHO I believe this should be part of the fundamentals taught/communicated within all therapy course curricula as a standard.

Thank you Marlon (and belatedly, Nick).

I have no idea how that could ever happen.