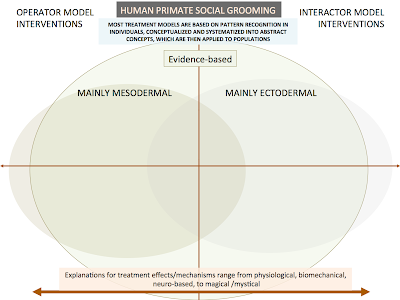 PATTERNICITY, ABSTRACTION, CONCEPTUALIZATION, APOPHENIA:
Because we are human, we do mental activity known as abstraction and conceptualization. We can't help ourselves. Things just turned out that way. Our brains evolved to recognize patterns, even false ones, and build conceptual baskets in which to store them, and from where we can retrieve them later, or compare  them to new patterns we see in the moment. It also evolved to believe that conceptualizations and abstractions, symbols for real things, are just as real as the things they symbolize.
The brain is a zoom lens. It distorts everything, including knowledge. So, science developed in order to correct for that. It's a way of smoothing out distortion of individuals by comparing more knowledge and more conceptual baskets than a single human brain ever could, using mathematical and statistical tools that have been agreed, collectively, do the job, if not to complete perfection, at least a whole lot more objectively than just one person's opinion. This clears away a lot of conceptual clutter.

EVIDENCE-BASED:
"Evidence-based" means that someone scientifically quantified the results from a bunch of interventions, and was able to show there was a "statistically significant" result, a positive treatment effect, that lasted over a given period of time. If it did this in the past, it is likely to be able to do this into the future, over time, become "predictable" which increases confidence in the method.

MECHANISM:
Evidence-based does not explain mechanism however. Other kinds of science (also relying on quantifiability) delve into mechanism and ultimately, converge to produce the world of thought's Best Guess as to What Might be Going on.


7. That which lies outside scientific scrutiny: 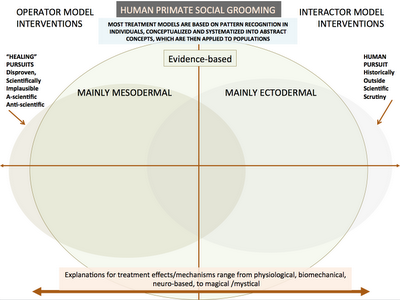 Here we see arrows on each side pointing to what is outside the range of evidence-based treatment.

In my mind (with all its individual bias) I see what is to the left, as being body-targeted interventions or conceptualizations, based on premises which have been disproven over time.

On the right, the bulge sticking outside the border of science represents human pursuits mostly uninteresting to or inaccessible by science (although science has made inroads there anyway).


8. Below are what, in my own mind, belong in these two groups of items. 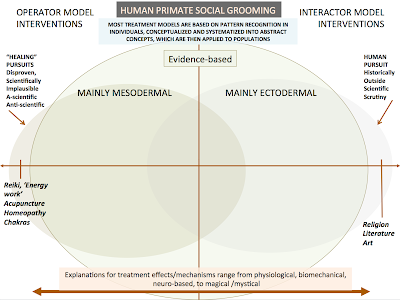 This leaves us with that big empty area in the middle to fill up. Which is where we are going next.