In this year of COVID: Indi Samarajiva, Part 3

This is the piece that really got to me. Went right through me. 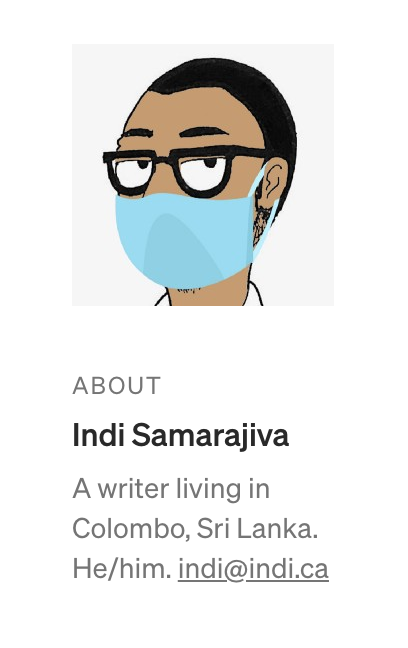 I lived through a stupid coup. America is having one now.

The third in his series on the American situation: He touches on the absurdity of coup, tries to explain what it is, how vulnerable US democracy is to it, remarks on the chaos associated with it.
Excerpts:

"Two years ago, I lived through a coup in Sri Lanka. It was stupid. The minority party threw chili powder at everyone in Parliament and took over by farce. Math, however, requires a majority and the courts kicked them out. They gave in. We’d been protesting for weeks and yay, we won. No. I didn’t know it at the time, but we had already lost. No one knew — but oh my God, what we lost. The legitimate government came back but it was divided and weak. We were divided and weak. We were vulnerable."

"Four months later, on Easter Sunday, some assholes attacked multiple churches and hotels, killing 269 of us.... Our nation was shattered. Mobs began attacking innocent Muslims. It was out of control. The coup broke our government, and four months later, that broke us."

"The coup was a farce at the time but how soon it turned to tragedy. They called it a constitutional crisis, but how soon it became a real one. Right now, the same thing is happening to you. I’m trying to warn you America. It seems stupid now, but the consequences are not."

"What is a coup? It’s literally a blow, a strike. Someone hitting your normal processes of government, trying to knock them over. The blow doesn’t have to succeed. It still wounds. In our case it was occupying Parliament without a majority. In yours it’s denying the President-Elect after an election. Whether it fails or not, deep structural damage is done. At the time, however, it just feels dumb."

"The US system is weird, but people voted for a change of power. One person is refusing to accept the people’s will. He’s taking power that doesn’t belong to him. That’s a coup."

"American commentators say “we’re like the third world now” as if our very existence is a pejorative. Ha ha, you assholes, stop calling us that. You’re no better than us. The third world from the Sun is Earth. You live here too."

"You’ve already lost. This is what Americans need to understand"

FRAGILITY AND SUSCEPTIBILITY OF US DEMOCRACY TO COUP

"America, in fact, is worse than us. America’s democracy is a lightly modified enslavement system that black people only wrested universal franchise from in 1965. It’s frankly a terrible democracy, built on voter suppression of 94% of the population, full of racist booby traps and prone to absurd randomness. For example, your dumbass founders left enough time to get to Washington by horse. Four months where a loser could hold power, later reduced to two. This is a built-in coup."

"Think about it. Your system gives the loser all the power and guns for two whole months. Almost every modern democracy changes power the next day, to avoid the very situation you’re in."

"This year America had fascism on the ballot and nonwhite people mercifully said no. The fascists, however, are now saying fuck ballots. And enough of the population is like fuck yeah!"

"This is a major problem, and it won’t just go away on a technicality. I’m telling you, as someone that’s been there, you’ve already lost. It doesn’t matter if you get Trump out. He and the Republican Party are destroying trust in elections in general. This is catastrophic. You have no idea."

THE NATURE OF CHAOS

"Republicans have set forces into play they cannot possibly understand and certainly cannot control. And they don’t even want to. To them, chaos is a ladder."

"This is precisely why we have elections, and why both sides accept the results. To keep the chaos at bay. The whole point is that you have a regular, ritual fight rather than fighting all the time. Once one side breaks ritual then you’re on the way to civil war. Once you break the rules then chaos ensues. What exactly happens? I don’t know. It’s chaos."

"My wife and children were at church that day. Our regular church (where they hadn’t gone) had bombs on either side. I couldn’t understand the news when I first got it and you cannot understand the fear until they were safely home. I do not want you to understand but I fear one day you must. You have fucked with chaos and soon chaos will fuck with you." ...............