SEE ALL PREVIOUS BLOGPOSTS IN THIS SERIES LISTED AT END

Picking up where we left off yesterday, we were portaging around some rapids to get back to the river, a slow and gruelling but necessary detour in our examination of Pain 2013 by Melzack and Katz, dropping back at strategic intervals into Melzack 1989 to flesh out his revolutionary ideas better.

Melzack did examine the devastation left in the wake of the old brain models. He did examine the contradictions they posed, to humans, to humans with pain, in excruciating detail. Then he looked beyond, abandoned them in order to create a better model.

M&K:
Conceptual reasons for a Neuromatrix

"It is difficult to comprehend how individual bits of information from skin, joints, or muscles can all come together to produce the experience of a coherent, articulated body. At any instant in time, millions of nerve impulses arrive at the brain from all the body's sensory systems, including the proprioceptive and vestibular systems. How can all this be integrated in a constantly changing unity of experience? Where does it all come together?"

As Lorimer Moseley would say, "That's a great, great question."

There weren't any answers. Old brain models could not account for the experience of being in a body. Melzack observed "We don't need a body to feel a body."

"Melzack18,19,21 conceptualized a genetically built-in neuromatrix for the whole body, producing a characteristic neurosignature for the body which carries with it patterns for the myriad qualities we feel. The neuromatrix produces a continuous message that represents the whole body in which details are differentiated within the whole as inputs come into it. We start from the top, with the experience of a unity of the body, and look for differentiation of detail within the whole. The neuromatrix, then, is a template of the whole, which provides the characteristic neural pattern for the whole body (the body's neurosignature) as well as subsets of signature patterns (from neuromodules) that relate to events at (or in) different parts of the body."

It might seem kind of creepy, but it appears that the brain ignores the "real" body (flesh, bone, mesodermal derivative, and all peripheral neurons involved in reporting from there) pretty much all the time. It has its own built-in maps of "reality", including bodily physicality, to which it refers, which it "feels," instead, i.e., the so-called "phantoms" and the "virtual bodies." It prefers, trusts those a lot more than the physical body it is embedded within, perfect reflections of reality, subject to perturbation. And this inner landscape is dominated by vision more than by kinaesthesia. Why? because we have primate brains. And that inner landscape is really all that "we" ("I"-illusions embedded inside the brain) have access to. When we shut our eyes.

[A word about this image. Maurits Escher has to be one of the most insightful artists the world has ever enjoyed. "His artistic expression was created from images in his mind, rather than directly from observations and travels to other countries" - Wikipedia. In other words, he was making art from examining his own inner landscape. He captured the inherent paradoxes beautifully I think. (In my 20's, my walls were covered in cheap abundantly available Escher reproductions, greeting cards, postcards.... maybe that's why I have no problem being riveted by Melzack's work.)]


"These views are in sharp contrast to the classical specificity theory in which the qualities of experience are presumed to be inherent in peripheral nerve fibers. Pain is not injury; the quality of pain experiences must not be confused with the physical event of breaking skin or bone. Warmth and cold are not ‘out there’; temperature changes occur ‘out there’, but the qualities of experience must be generated by structures in the brain. There are no external equivalents to stinging, smarting, tickling, itch; the qualities are produced by built-in neuromodules whose neurosignatures innately produce the qualities."

True... these views are in sharp contrast.
[I can't throw away peripheral neurons altogether just yet though. Why? Because they are made 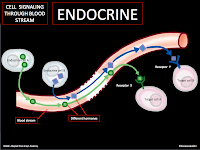 from neural crest. So what? Well, so are brain glia. Again, so what? Well... I dunno. Maybe it will turn out that peripheral neurons (not the motor neurons with their cell bodies inside the spinal cord, which are really therefore central nervous system neurons..),
I'm talking real peripheral neurons, sensory and autonomic motor neurons, i.e., ones that have cell bodies in dorsal root ganglia and similar ganglia within the brain - those neurons - the ones made out of neural crest cells; i.e., NOT the CNS nerve cells made of neural tube. Maybe they communicate somehow with glia in the brain, outside the conventional route, e.g. through long range neurocrine or endocrine signalling pathways not yet determined. Glia are also made from neural crest, and they run all the brain's synapses, so...

Just a stray thought. Back to regularly scheduled programming...]


"When all sensory systems are intact, inputs modulate the continuous neuromatrix output to produce the wide variety of experiences we feel. We may feel position, warmth, and several kinds of pain and pressure all at once. It is a single unitary feeling just as an orchestra produces a single unitary sound at any moment even though the sound comprises violins, cellos, horns, and so forth. Similarly, at a particular moment in time we feel complex qualities from all of the body. In addition, our experience of the body includes visual images, affect, ‘knowledge’ of the self (versus not-self) as well as the meaning of body parts in terms of social norms and values. It is hard to imagine of all of these bits and pieces coming together to produce a unitary body-self, but we can conceive of a neuromatrix which impresses a characteristic signature on all the inputs that converge on it and thereby produces the never-ending stream of feeling from the body."


"The experience of the body-self involves multiple dimensions—sensory, affective, evaluative, postural and many others. The sensory dimensions are subserved, in part at least, by portions of the neuromatrix that lie in the sensory projection areas of the brain; the affective dimensions are subserved by areas in the brainstem and limbic system. Each major psychological dimension (or quality) of experience is subserved by a particular portion of the neuromatrix which contributes a distinct portion of the total neurosignature.18,19,21 To use a musical analogy once again, it is like the strings, tympani, woodwinds and brasses of a symphony orchestra which each comprise a part of the whole; each makes its unique contribution yet is an integral part of a single symphony which varies continually from beginning to end."

Our "I" illusion just sits back and watches the symphony. It is spared all behind the scenes drama that went on through all evolutionary time prior to the Grand Production.


"The neuromatrix resembles Hebb's ‘cell assembly’ and Bindra's ‘gnostic organization’ by being a widespread network of cells that subserves a particular psychological function. However, the neural networks proposed by Hebb22 and Bindra23 developed by gradual sensory learning, whereas Melzack, instead, conceived the structure of the neuromatrix to be predominantly determined by genetic factors, although its eventual synaptic architecture is influenced by sensory inputs. This emphasis on the genetic contribution to the brain does not diminish the importance of sensory inputs. The neuromatrix is a psychologically meaningful unit, developed by both heredity and learning, that represents an entire unified entity."

Musicians may come and go, but the music itself plays on.

Next, we'll examine the action-neuromatrix.

Part 7: Gate control theory has stood the test of time: Patrick David Wall;  Part 7b: Gate control: "The theory was a leap of faith but it was right!"
Part 8: Beyond the gate: Self as mayor Part 8b: 3-ring circus of self Part 8c: Getting objective about subjectivity
Part 9: Phantom pain - in the brain! Part 9b: Dawn of the Neuromatrix model Part 9c: Neuromatrix: MORE than just spinal projection areas in thalamus and cortex Part 9d: More about phantom body pain in paraplegics
Part 10: "We don't need a body to feel a body." Part 10b: Conclusion1: The brain generates its own experience of being in a body Part 10c:Conclusion 2: Your brain, not your body, tells you what you're feeling Part 10d: Conclusion 3: The brain's sense of "Self" can INclude missing parts, or EXclude actual parts, of the biological body Part 10e: The neural network that both comprises and moves "Self" is (only)modified by sensory experience
Posted by Diane Jacobs at 10:26 AM