1. GORILLAS
The first was a blogpost by Steven Novella called Gorilla in the Bronchi, commenting on a study I had seen in the news feed before, done recently - radiologists who have fabulously well-trained patternicity-recognizing capabilities were asked to examine a bunch of lung images, and most failed to see a deliberate insertion of the image of a gorilla. They looked right past it.

The blogpost by Steven Novella is well worth a good read - it pulls together lots of information, as usual.
The inattentional blindness revealed by this study is hilarious of course; the often dire situation of fallible human perception never is. The whole thing made me wonder about which side of the brain would have been controlling the exam as per Iain McGilchrist?

2. PERIPHERAL NERVE INJURY
The other thing that caught my eye was a recent paper, Peripheral Nerve Injury Is Associated with Chronic, Reversible Changes in Global DNA Methylation in the Mouse Prefrontal Cortex

Abstract
Changes in brain structure and cortical function are associated with many chronic pain conditions including low back pain and fibromyalgia. The magnitude of these changes correlates with the duration and/or the intensity of chronic pain. Most studies report changes in common areas involved in pain modulation, including the prefrontal cortex (PFC), and pain-related pathological changes in the PFC can be reversed with effective treatment. While the mechanisms underlying these changes are unknown, they must be dynamically regulated. Epigenetic modulation of gene expression in response to experience and environment is reversible and dynamic. Epigenetic modulation by DNA methylation is associated with abnormal behavior and pathological gene expression in the central nervous system. DNA methylation might also be involved in mediating the pathologies associated with chronic pain in the brain. We therefore tested a) whether alterations in DNA methylation are found in the brain long after chronic neuropathic pain is induced in the periphery using the spared nerve injury modal and b) whether these injury-associated changes are reversible by interventions that reverse the pathologies associated with chronic pain. Six months following peripheral nerve injury, abnormal sensory thresholds and increased anxiety were accompanied by decreased global methylation in the PFC and the amygdala but not in the visual cortex or the thalamus. Environmental enrichment attenuated nerve injury-induced hypersensitivity and reversed the changes in global PFC methylation. Furthermore, global PFC methylation correlated with mechanical and thermal sensitivity in neuropathic mice. In summary, induction of chronic pain by peripheral nerve injury is associated with epigenetic changes in the brain. These changes are detected long after the original injury, at a long distance from the site of injury and are reversible with environmental manipulation. Changes in brain structure and cortical function that are associated with chronic pain conditions may therefore be mediated by epigenetic mechanisms.

This sentence in particular:

"In summary, induction of chronic pain by peripheral nerve injury is associated with epigenetic changes in the brain. These changes are detected long after the original injury, at a long distance from the site of injury and are reversible with environmental manipulation."

Then I remembered the whole neuropathic pain redefinition and grading scale recently adopted by IASP, as discussed in this blogpost. 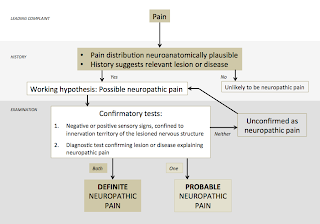 More than anything else that weekend in Moose Jaw, this news gave me hope. It seemed to me that some arbitrarily placed line that had existed between a thing called "nociceptive pain" and another thing called "neuropathic pain" had faded and dissolved. Here is a link to the abstract of Treede et al's 2008 paper:


Neuropathic pain: redefinition and a grading system for clinical and research purposes.


Once obscured because of intrinsic foibles of human perception, previously "hidden" because of inattentional blindness, once someone pointed out the gorillas, maybe, from now on, seeing them will be unavoidable.

WHAT TO MAKE OF ALL THIS?

The paper studied a mouse model. They found that an enriched environment (i.e., novel stimuli?) helped take mice brains off their nociceptive input, distract themselves enough, maybe, to learn how to not be in "pain".
Pretty cool. Right?

I ask you, in all sincerity, what are therapists if not external environments to a patient's nervous system? Particularly, if we are manual therapists, to the peripheral nervous system? Is not exteroceptive skin contact from a relative stranger a form of "novel input"?
Not that there aren't concomitant changes going on all over the place in the nervous system, especially in cognitive-evaluative bits of the brain. Especially when it comes to the brain sorting out its own INTRA relationship between human brain and critter brain. It's not JUST peripheral input, and the peripheral input doesn't stay ONLY in the periphery.. but it may well have to start or be started from there.

The way I see it, an hypothesis I want to set out, is that "pain" is when there is a tug of war going on over "who" [which brain part] has what access to the peripheral nervous system.
The PNS is not that big. Only a couple hundred million neurons, maybe, compared to the CNS, with 100 billion (rounded up).
Yet it is through the PNS that all body functions are managed.
The critter brain, having been around a lot longer (500 million years) usually manages the "body" by itself. If you look even closer, a lot of the "body" functions are even more automated and locally controlled, by ganglia themselves, acting like little brains, sort of.
However, the human brain (more recently evolved and slower to come online neocortex) can access the motor output pathways to do whatever it wants - except for when the critter part bares its fangs and suggests, "No f---ing way."
Then we have an impasse, because movement hurts.

Learning to soothe the savage beast, outsmart the wicked witch - all fairy tales seem to be about that kind of thing, one way or another. Metaphor for intrinsic patterns of physical existence I suspect.

Sometimes it takes seeking a bit of social grooming help from our friends. All vertebrates, at least, most of us, do this - it's a very well-conserved evolutionary behaviour. Primates took it to another level. Humans have taken it even further, call it manual therapy (then promptly forgot about its origins). That's my story and I'm sticking to it.

What if the person being "manipulated" was, for example, more in the "driver's seat," initiating a movement based on the guidance of someone who sees the holding pattern in the person's posture? Could then the suffering human learn how to reset chronic muscular contractions that have become temporarily "deadened," or suspended from normal function? What if the person providing guidance also supplied a bit of resistance to the voluntarily-initiated movement of the suffering human, as they carry out movement akin to the pattern they are currently holding? Could that "wake up" the target area, bringing it back online? Then, the person providing the assistance is more like a teacher, rather then someone who "works" the person over, sometimes creating more pain than before... And please help clarify what happens when we stretch a tight muscle on ourselves and/or on another person. I think the hockey goalies in this world might benefit from an improved understanding of the stretch reflex. Thank you, I love your writing, even though I don't understand all of it, still pretty technical for me.

Hello, anonymous, whoever you are,
>> "please help clarify what happens when we stretch a tight muscle on ourselves and/or on another person."

I don't know, because how do we isolate a stretch maneuver to just one kind of tissue? On ourselves or on somebody else? I think that's a story somebody made up and everyone adopted for convenience. The body is heterogeneous, i.e., lots of kinds of tissue.

>> "I think the hockey goalies in this world might benefit from an improved understanding of the stretch reflex."

>> "Thank you, I love your writing, even though I don't understand all of it, still pretty technical for me."

Thank you, I appreciate anyone who reads my mental composting efforts.