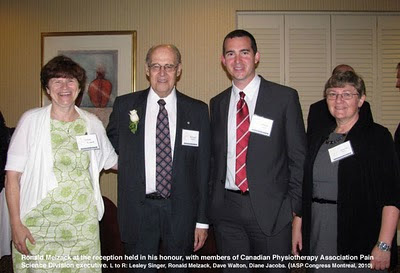 It's good to have long term goals, right? One of mine is that every PT on the planet eventually be exposed to Melzack's neuromatrix model of pain (5 page pdf), and learn to see being a PT as equivalent to being a neuromatrician. Another goal is to have every manual therapist realize the two main input domains* of a neuromatrix they can favorably influence, and why it's important to be careful what is put into them, and how. A third is that each therapist would operate from a working knowledge and awareness of his or her OWN neuromatrix while working on another's (interactor model of treatment), and not merely from recipes and protocols and paradigms that elevate structural tissue above signaling tissue (operator models of treatment).

With this as the backdrop I attended a reception at the recent IASP Congress in Montreal, to celebrate the lifetime contributions of one of Canada's most famous if not THE most famous of pain researchers anywhere, Ronald Melzack.

He had not met us before (except perhaps Dave), although he wrote a message of support at our request back when we were trying to organize a proposal to become a Pain Science Division of CPA. A line of people were wishing him well as he made his way out of the room after the reception. He was moving toward a larger brighter lobby for some pictures with all the grad students he had worked with over the years. I positioned myself at the end of that line, introduced myself and told him who we were, thanked him for all the work he has done in his life, remarked that I would like all physiotherapists to become neuromatricians, asked him if he would be willing to let us have a picture with him. He was very gracious and more than willing. It was the highlight of the trip to Montreal and perhaps my whole life. I can now die, anytime, a happy woman.