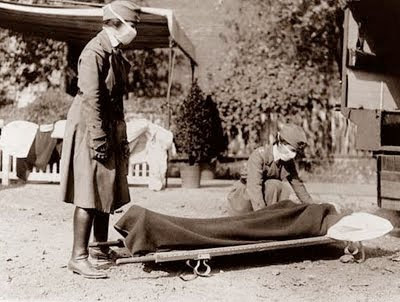 I wrote a bit about this just yesterday. A number of years ago, while researching what life was like in the early part of the last century, trying to feel the context of the birth of physiotherapy as a profession in the world, I read all about the flu pandemic of 1918, and I must confess, it scared the bejeebers out of me. I don't scare easily - it's just that this thing killed such a huge percentage of the population of the day, and there was no stopping it then like there is now. Like most everything in nature that moves, it came in waves.

There were no flu shots available way back then. It was AFTER, and likely BECAUSE of the 1918 pandemic, which scared the bejeebers out of the entire world, that Centers for Disease Control developed, and vaccines were developed, to try to keep something like this from ever slowing us human primates in our various troops, down, ever again.

I want to grab Bill Maher (and others like him) (gently) and shake him, ask him to wake up, and go to, look at, read the following links. Try to understand the deal here. Ask him to set an example of the right sort.

"The 1918 flu pandemic (commonly referred to as the Spanish Flu) was an influenza pandemic that spread to nearly every part of the world. It was caused by an unusually virulent and deadly influenza A virus strain of subtype H1N1."

4. The 1918 Influenza Pandemic from Stanford, somewhat scholarly treatment of the issue

5. Mother of all Pandemics
Posted by Diane Jacobs at 6:36 AM