Down a long grey road 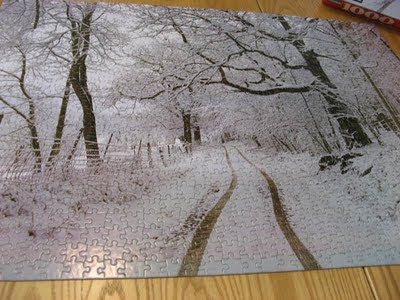 Here is a picture of what I've been working on lately.
It took a weekend. One thousand pieces. As I worked I thought about all the ways jigsaw pieces are like people and putting jigsaws together is like life, but then I googled "life is like a jigsaw puzzle" and found that since jillions of others have arrived at similar conclusions, I would refrain from boring anyone with same-old.

Let me just say that the puzzle matched my mood - a long grey road to nowhere except into the future in a grey world which, although it had beauty, was cold. It was a hard puzzle for being
a) monochromatic
b) no straight lines anywhere

I got it done. I got my mood externalized, defined.


I felt more in control after, but still felt pretty monochromatic, bleak, difficult, etc. on the inside. Current blahness stems from the fact that the organizational part of me is very burnt out from the prep for the move, the move itself, and is finally taking a break from life. Also, I recognize how depressed I've been, and have suppressed, for years, thanks to low light levels. (At least that's what I choose to pin blame onto. It's all Vancouver's fault.)

My self-therapy job right now is to stop being concerned about the fact that I can't seem to make much of a plan, or study, or work on my projects, or be social, and just let large chunks of my brain take their time coming back to normal. Meanwhile I occupy myself these days going to the gym, Lu's Train Station. It has the vibe my brain seems to need right now - life is material, so push against it. Very physical. Nothing to distract.
.........

However! .....
Yesterday I cheered up pretty good and I want to share why - someone posted links to Hans Rosling TED talks. I got into them and found myself entranced. This guy, a Swede, a medical doctor, statistician, professor of global health at the university which has a committee which peruses the annual candidates for Nobel prizes in medical physiology, a co-founder of Doctors Without Borders, has managed to create the means by which anyone who cares to can look at data collected painstakingly over decades by the UN, on the economic and health of many many countries, and compare them visually. His system is called Gapminder. He designed the visuals to be colorful, fully manipulable bubbles with size comparable to population, which rise to the left when health improves and which rise to the right when economics improve. It's the most lovely way I've ever seen, to look at statistical data.

In a number of TED talks, he explains his system and uses statistics to show how the world has improved in the last couple centuries. His enthusiasm for this adventure and his optimism based on his datasets is completely infectious. I felt oddly buoyed up by all this. It's good that someone out there, so clearly brilliant and beyond kidding anyone, sees the world in this way. It just plain makes me feel better about the planet and about the people on it and about my own being here. It's not like there aren't still lots of problems out there but I can see how breaking them up into little bits gives a better overall picture.

If your outlook on life happens to be underwater and you need to breath some life back into yourself, the hour it takes to watch all three is well worth it.
Posted by Diane Jacobs at 7:55 AM

Yes, Rosling is a revelation. Democracy is linked to middle classes, too. No middle class, no democracy. We have never had as many democracies up to now. There needs to be a basic wealth to enable modern government. The wealth has to a large part been pulled out of fossil fuels so far.

Like your blog. Carl Sagan's book "The varieties of scientific experience" was one I really liked much.