Exceptionalism of the American kind

Human primate life is equal parts bio/psycho/social. Ordinarily I look at the bio part; sometimes the psycho aspect is interesting, but only very rarely (for this introvert) does the big-wide-world social matrix interest me enough to write something on it. This week, the Obama-thon had everyone, even me, glued to a TV set.

The Obama inauguration has come and gone leaving a very big wake. Ripples will come off that event for a long time. Probably nothing since the death of Princess Di has managed to rivet people's attention worldwide to such a single sustained focus for a couple whole days.
..................... 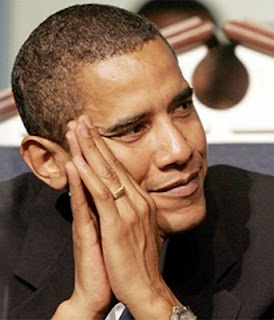 So, I heard Obama talk about American exceptionalism, and wondered what it was. I read a bit about it (including this), and have tried to figure out what its implications are.

As a Canadian, I see the US culture, its political construct, its way of organizing itself as a human primate troop, its behaviour and its impact, against a whole backdrop of older, tamer, more restrictive, certainly more ubiquitous, settled, and staid political systems, such as monarchy, or even dictatorship, where things settled into more less stable layers a long time ago. Boring, right? On the surface, the insistence on democracy sounds very very good, very refreshing. (I think 200+ years is a mere blink in social, human primate troop time.)

To me the term suggests pride in deliberate disinhibition of human potential, deliberately facilitated by a "human primate troop" (societal) political structure which accelerates movement between strata both laterally and vertically, horizontally and diagonally. It has always seemed to me that the "American Way" is self-congratulatory on its success at having developed a system that managed to un-lid human creativity, ingenuity, efficiency, adaptability, and effervescence. That is something everyone of every culture, country, age and color, is immediately addicted to. It's a manifestation of "people" power, and everyone wants to wear its symbols, eat the candy.

I watched Obama test the political part of the US electoral system, from the lowest P4 level deep down, on up to the pinnacle of the system, and prove it works - after all, he did go from being a potentially laid-back Hawaiian kid of a single mom, to being president of the US, in under 50 years. He proved that the idea that "anyone can become president" isn't just a myth - he figured out the trick!

He studied, took apart the political machine, analyzed it, and was able to convince a majority that he is willing to and can put it all back together again, in working order. This says something about him, his choices, how he was raised, for sure, but it also says a lot about a system that anyone, REALLY, not just theoretically, can learn to manipulate, leverage to advantage.

He must be the world's most successful extrovert. He represents the people of the entire planet. He still smokes. That's got to make the tobacco lobby happy. Clearly he can think and plot. Read and write. Make great speeches. And look good.
.........


The dark side I see in American exceptionalism is this: It may have created its own demise from the beginning, due directly to having deliberately laid in political dis-inhibition, permitting social "upward causation" instead of functioning as social inhibition, keeping a lid on things, the way other political systems do.

I think this memeplex (which had never really existed, prior, at a nation level, start to finish), emerged as a raging cachectic economic fireball which started out small, 200 odd years ago, but which is now consuming everything, including everyone everywhere who was ever mesmerized by the spectacle of a country that gets-things-done no matter how much it might cost, whose business is business, whose might has rested on seeing how fast it can transform "nature" (which it calls "resources") into another second artificial circulation system of other stuff/money that isn't alive and is therefore hard for nature to take apart again. Runaway growth. Poking holes in the planet as fast as possible to extract oil as fast as possible. Using up nature. It all set an unfortunate example for the rest of the peoples on the planet, and they copied. (Damn those human primate mirror neurons.)

If Obama can manage to turn something like this around, green up US citizenry, grow the country a bit of a conscience, help it find some smooth way to stop acting like a reckless teenager banging the whole planet around, every human on the planet will be grateful to him. He won't be just another poser filling a job slot, he'll have been for real. 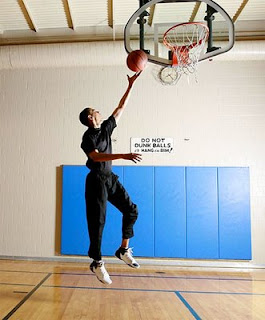 The Game he'll have to play, the thing that will keep all eyes riveted on him, is to stay suspended in mid-air (like this picture of him effortlessly playing basketball), so that no one spots his "tell", so that no one will know to the very last millisecond which way he is going to come down or which part will touch down first.

Mesmerize by continuous motion coupled with frequent reflection outward of attractive toothy grin, calm inner state, deliver all news (including the bad) in even soothing sedate studied tones, leave no stone unturned (take the oath twice just to make sure), report any progress, and obstacles, cheer on human creativity, ingenuity, efficiency, adaptability, and effervescence, but bend it toward solving social problems instead of making more of them through allowing the American memeplex to go unchecked with a social kind of "downward causation" - i.e., encouraging the sole objective of making more stuff/money => and fighting wars all over the place to maintain access to resources => to make stuff/money... etc.etc.

I'm so glad, if the perhaps overly optimistic US economic system had to fall apart some day, that it fell apart while Bush was still in office. The timing couldn't have been better, really, in that no one will ever be able to blame that on Obama. The political system may also collapse some day, but while it's still functional I'm glad that Obama is the one who has taken it on. It's as though he has volunteered to be the engineer on a freight train which has experienced sudden loss of brakes and is hurtling downhill. Maybe he can figure out how to steer it safely, maybe repair the brakes before it's too late... wishful thinking. The train looks like it's going to crash, but maybe he can save most of the passengers. At least he seems to care about them...

I say all this as someone from a more staid, less fast-moving, monarchist, pseudo- (by US standards) democracy slightly to the north of the US., with lots of resources, fewer people, which has never been in any great hurry to use them up completely as fast as possible. The pace is slower - we like to wait for nature to grow back a bit before we cut it down again..

Our head of state, Michaelle Jean, is a black first generation Haitian refugee, who (as far as I know) doesn't smoke. She was appointed to represent the queen. 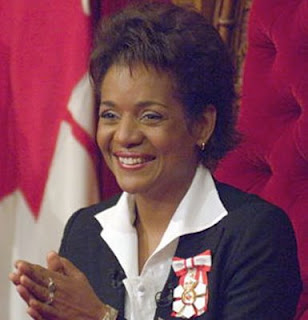 Mostly she gets to travel and look good and attend tea parties, but if political trouble brews, as it did here last fall, she flies home, turns to page 57, section D paragraph 3, point viii, (or wherever) and does what's written in the traditional rulebook. Simple.
We have a protocol for everything, you see, and it saves everyone lots of stress, let's everyone get back to their respective tea parties.

The politicians of Canada are decidedly not noted for any creativity, ingenuity, efficiency, adaptability, and effervescence. They show up (usually) and (usually) keep things rolling along, but Canuck citizens are not required to participate in government in anything like the way US citizens are all expected to contribute. (I was amazed that the US ballots are several pages long, that each person who votes has to become familiar with every issue and its implications, that nothing much happens until and unless ordinary citizens haul themselves out to become informed about then vote on each item. Here, we, the Canuck citizens, hire politicians to do all that. We have all adopted our own versions of the "downward causation" tea party memeplex, instead, I suppose.)

I do not see that the citizens of the US have gotten much for their trouble so far. I see that, so far, the "democracy" they continue to have to pour effort and personal sacrifice into hasn't looked after them yet. Maybe it will start soon.

I also see that US citizens finally spotted someone who made them stop feeling tired and burnt out. Who has made them feel like maybe they can stop feeling oppressed, or like they maybe won't have to fight each other and the government for each and every scrap they have coming to them. Someone who might actually stop trying to hoover up all the remaining resources on the entire planet, and who might listen to them for a change, might try to re-route a few organized efforts their way to make ordinary lives a bit easier, less expensive, who might even help lighten the load on the whole planet for a change, make everything less expensive. Who might see "people" as integral bits of the earth, and the earth as the only place we all can ever "live." Who might see that it's time to stop acting like there's no tomorrow, now that there might not actually be much of a "tomorrow"...

Maybe even change the meaning of "exceptionalism" so that it more accurately reflects what US people are really all about, a very hard-working, self-democratized human primate troop, so we all get to see what kind of global conduct and capacity to carry responsibility they've really been training themselves for two centuries or thereabouts to have, and how they see what's going on/going down.

Can an entire human troop (the people of the US) lead all the other slower troops (every other country)? Can the supposedly less politically blind lead the presumably more blind? Out of a dangerous chasm it led everyone/everything into in the first place? Perhaps just by using up the planet faster than it could replenish itself?

I guess we'll all find out one day, in retrospect, if this is so. Maybe Obama will be able to arrange that. Meanwhile, I will continue to watch him, listen to him. I felt included in his address, because he included everybody, everywhere, and mentioned non-believers alongside other groups specified. It's a nice warm fuzzy to have one of one's primary groups be recognized, by name, by the newest politically alpha human primate of the entire world's human primate troop.

Additional reading:
1. Getting there from here (Atul Gawande on health care reform, New Yorker Jan 26/09)
2. Path dependence - definitions
3. Compatibilism from Stanford Encyclopedia of Philosophy
4. "If the world were a village of 1000 people"
5. American Exceptionalism - A Double Edged Sword (Lipset)
6. On America's Double Standard: The good and bad faces of exceptionalism by Harold Hongju Koh (2004)
Posted by Diane Jacobs at 4:35 PM