Boundaries in the age of COVID: Part 7


Last night I had the following dream:

I attended a woman for treatment, for some upper back pain. She had short brown hair, long enough to cover her ears though, and brown eyes, no glasses, round face, wore a white lab coat of all things.
She was a chiropractor and wanted to crack my back. I told her in no uncertain terms to do no such thing.
She was not happy, because she didn't feel she would be paid unless she did that. I told her I'd pay her NOT to crack my back.
She still wasn't happy. I guess she really wanted to make noise so her own personal relationship with herself would feel fulfilled or something.
Anyway, my back, my boundary.

In the same office in my dream was an optometrist. I had purchased eyeglass frames there, and they had come apart, and I wanted either repair or a new pair the same. During the span of the dream, this was never resolved.
I really liked the frames, you see.
They were white with cutouts in a sort of teardrop pattern. Super gross obviously, but in the dream, very trendy. I know I was anxious to have them on my face again.
My dream brain keeps me amused. 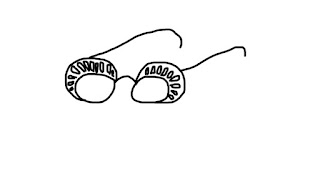 I think the teardrop business may have had to do with how many of those I produced while watching the virtual vigil for Nova Scotia yesterday.
But I digress.

New topic.
This morning I had a facetime call from an Irish physio I met in 2012 when I taught a workshop in the UK, who has a certificate in chronic pain management, who lives in Norway, and has ties to Cognitive Functional Therapy (Peter O'Sullivan) through Norwegian colleagues who are also professors in physio schools there.
She wanted me to know that the class had meant a lot to her, had taught her it was fine to be interactive and not operative, that she had started a whole education project/network of physios who work from home, showed me her new "office" which was her bedroom with bed removed, some space for her to demo exercise, a plant in the corner for visual pleasantness, how she showed people how to self-treat based on my techniques, how she still had my manual from 8 years ago propped up on a shelf.
She wanted to talk about how she had moved to video consults with her patients in their own homes. How interesting it was to see their environments without having to be physically there, how much easier it was for stroke patients and spinal cord injured patients and their caregivers to not have to physically bring themselves to a clinic.
She sounded worried that I was going to retire my little hands-on practice, said she thought it would be great if I decided to maintain an online practice instead, where anyone in the world could consult with me if they wanted to.
I told her I would have to think about that.
I'm ecstatic however that at least one physio in the world that I've personally taught got it, really got it, and is running with it. What did she get? She got that she is competent with or without her hands, to assess and interview and treat. That novel sensory input can be delivered verbally. And that if people really need some hands-on, she can nimbly come up with a creative plan that involves them doing something to their own skin organ at home.
If she gets her network built she may actually be a mover and shaker for helping the profession evolve itself away from stupid stuff toward being much much better, toward being the interactive profession it originally intended to be, and away from the stupid operative profession it morphed itself into over the decades I practiced, much to my continual dismay.
.......

New topic.
I'm still reeling around in a fog, not really up for charting a new course through choppy water.
For being extroverted, out in the world.
In fact this whole stay at home business could not have come at a more opportune time for me, personally.
Whenever I get like this, I have to just wait until motivation comes back on its own. I've never ever figured out how to entice motivation to be there when it's simply not. Just washing out a coffee cup is a big effort.
I know getting a haircut would help, but that can't happen for a few more weeks at least.
I'm OK financially, I'm existentially safe, I'm actually not feeling depressed for a change, so at least I have that much going for me. I count these blessings every day.
My own boundaries are rearranging themselves. It must be like how insects feel when they pupate. Or like how embryos feel when they are at the mercy of forces pulling them this way and that into physical existence. In the past, I've likened the process to molting like a bird or a dog, or shedding skin like a reptile. But this time, it feels like it's a lot deeper, and a huge sap of energy.

I have to say, you don't know me. We've never met.

I have not been to any of your trainings. But I have read your book. I follow what you say. I read some, most of, many debates.

My family knows your name as I speak of you often. My husband who is from Yorkton probably takes some pride in that.

Your influence is with me in the way I show up for anyone I work with. Our interaction, from the moment we meet.

I've been looking to watch all the John Vervaeke series. I begin, then get distracted or don't have the time. But I so appreciate the depth of what he too, has to say so, thank you for that as well.

Most grateful, for all your work Diane.

Thank you for your kid words.