Pain and stress in a systems perspective

Today Ian Stevens sent me a link to an old paper (old by publishing metrics) from 2008, Pain and stress in a system's perspective. It's open access and a joy to read, the way it describes the connectivity of systems within a multi-cellular organism such as ourselves.

I bring it forth, not just because it's a great paper, but also because I want to draw attention (yes, again...) to the point that astroglia are not immune cells.

The paper has this to say about glial cells:


"Microglia, oligodendrocytes and astrocytes reside within the CNS and contribute to inflammation and peripheral injury-induced pain, including the spread of pain. Microglia are immune cells closely related to macrophages that express the same surface markers. Injury and other events that threaten homeostasis activate microglia. These immune cells contribute to hyperalgesia and alloydynia by releasing pro-inflammatory cytokines and chemokines, and they are probably involved in several neuropathic pain conditions.

As you can see, the paper explicitly points out that microglia are immune cells, which is correct, but unfortunately it isn't QUITE as explicit about pointing out that astroglia are non-neuronal neural cells. It doesn't however, SAY that astroglia are immune cells. Which gives me a feeling of relief.
I regret to say that at the moment there is a line of confusion moving along that has astrocytes conflated with immune cells.
Yes, they have certain immune capabilities, but it seems to me, that along with other kinds of macroglia (microglia excluded) their MAIN job is to keep neurons protected from direct contact with blood, even as they extract glucose and oxygen to supply to neurons, which (greedy little hogs that they are) require a vastly disproportionate amount of same in order to function, collectively, as the nervous system. Two percent of the body, using up 20% of its fuel.

At the San Diego Pain Summit, I heard Lorimer Moseley refer to glia as immune cells.
(Erk.)
I'm still a fan girl, but I wish he and the others would stop conflating all glia as being immune cells.

There is a vast difference based on embryologic origin that is easily discernible, and learnable from the most easily accessible source by googling.

"Most glia are derived from ectodermal tissue of the developing embryo, in particular the neural tube and crest. The exception is microglia, which are derived from hemopoietic stem cells. In the adult, microglia are largely a self-renewing population and are distinct from macrophages and monocytes, which infiltrate the injured and diseased CNS.
"In the central nervous system, glia develop from the ventricular zone of the neural tube. These glia include the oligodendrocytes, ependymal cells, and astrocytes. In the peripheral nervous system, glia derive from the neural crest. These PNS glia include Schwann cells in nerves and satellite glial cells in ganglia." Wikipedia

Understanding embryonic origins of cells helps place them in a developmental tree of most primitive to most recent. I'm pretty sure that a clear understanding of primitive <-> recent helps one understand better how things work together as nested systems in a multicell organism like us, with so many different cell types, all requiring differing levels of fuel, the most outrageous example of which is the nervous system's greedy-pants need for such an overwhelmingly large proportion of whatever O2 and glucose happens to be available 24/7.

After writing this blogpost, a long twitter conversation ensued. I did not buckle. I stand by my opinion: to call astrocytes "immune cells" is categorically incorrect.

Among all sorts of other deflective offerings, it was declared that using Wikipedia as a reference is wrong because it has errors.
In response to that, I now have a perhaps better reference, that may elicit more respect, full text:
Kessaris N, Pringle N, Richardson WD;  Specification of CNS glia from neural stem cells in the embryonic neuroepithelium.  Philos Trans R Soc Lond B Biol Sci. 2008 Jan 12;363(1489):71-85.


"The nervous system is composed of neurons and glial cells. Glial cells in the central nervous system (CNS) include both the ‘macroglia’, which are derived from the neural tube, and the ‘microglia’, which are derived from haemopoietic precursors. Microglia are the resident macrophages of the CNS and play a key role in immune surveillance and defence."


Macrophages are immune cells, very primitive, that can move autonomously, are attracted to chemogradients, and will eat up dead things, or any else that moves that they can sense and move toward and ingest. Scavengers. Sea-gulls of the body. Or fly larvae. Yes, the ecosystem of the physical body needs those.

Other glia, macroglia, including astrocytes, are brain cells. OK? Do we really have to argue anymore about this? Astrocytes = brain cells. I.e., NOT immune cells.

Haemopoietic stem cells come from bone marrow and before that, from embryonic support tissue. I.e., not ectoderm/ brain cells.  Immune cells = blood cells. I.e., Microglia = NOT brain cells. Is everyone clear on this?
One of the biggest jobs glia in both brain and body have is to keep blood AWAY from neurons, by wrapping them, protecting the sensitive little things AWAY fom all the caustic chemical barrage blood has to offer. It's called maintaining the blood/brain or blood/nerve barrier. Not that it doesn't fail sometimes. Not that it's perfect. But it evolved, it's there, and works fairly well most of the time, in most people.
By the same token would it not make sense that astro and other macroglia keep microglia, etc., from sensing/being attracted toward neurons? How could a system evolve that had microglia being attracted to and chomping down on neurons? Wouldn't a creature like that would be selected against, not develop much in the way of brain?
Not that we aren't all gonna die some day anyway, through systems failure. Not that a lot of us won't go down with one kind of dementia or another, or have pain of one sort or another, maybe a kind created by systems failure of a glial sort, even.
No argument from me about that.

But I will go to my grave (earlier than I should have to maybe, because of all the twitter protestation) stating that this sentence is incorrect. 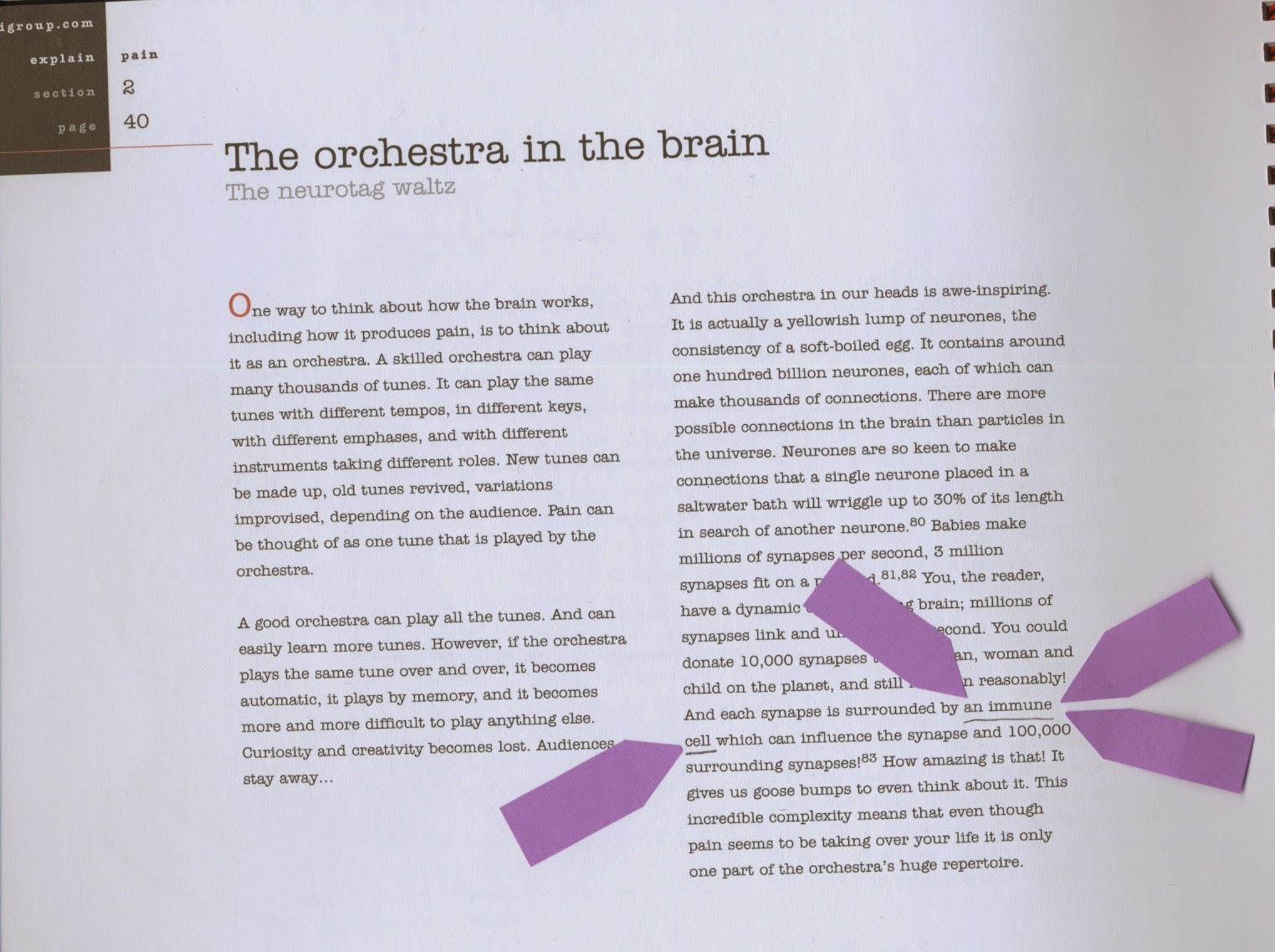 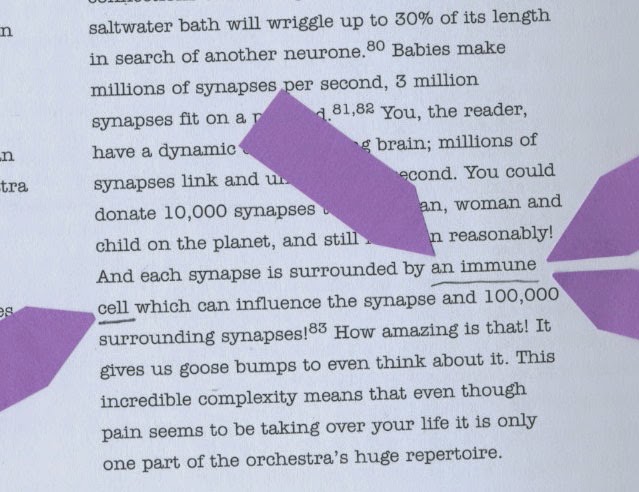