San Diego's first ever Pain Summit, clinical applications of pain science for manual therapists, was the first ever of its kind in the US. Thirteen different professions were represented from 8 different countries and at least three continents. Here is a page with lots of photos of the event.

I've been asked by the Canadian Physiotherapy Association Pain Science Division to write a review, so here it is.

Now that the review is done, I fill in the rest of this post with this and that.

1. Here are other reviews of the weekend. They are way more awesome than any review I could devise, at this point.

2. I still have jet lag from travelling to Spain earlier in the month and all the stress from that trip.

3. I was a speaker at #sdpain, the inaugural San Diego Pain Summit 2015, and can't therefore really be objective.

4. My favourite rock star PT pain researcher was there, as keynote, and I managed to get a picture with him.
5. There were lots of people there from Canada. Neil Pearson was another speaker. He is a past chair of PSD and cofounder of it.


Susannah Britnell was there - she is a committee member in PSD's communications group, the same one I'm in...

6. There were many many speakers. Here is a picture of us all. From left to right: 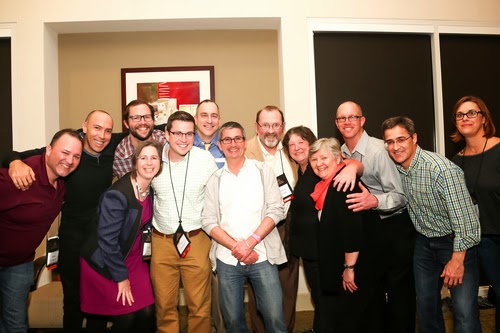 a) Jason Erickson, the MC. Jason is a massage therapist from Minneapolis. I met him on www.SomaSimple.com years ago. He facilitated two workshops I taught at. He teaches mostly on the east side of the U.S.

b) Lorimer Moseley. Good grief, does he need any introduction? Here is a little writeup I did about him a few years ago. He runs the BodyInMind blog for researchers and clinicians. You will find many many papers there for free download. His talks at #sdpain were great, of course. Stay tuned for DIMs and SIMs. DIM is "danger in me" and SIM is "Safety in me".
His latest definition of pain is "Pain = (credible evidence of danger) - (credible evidence of safety)

c) Eric Kruger - Eric is a Next Generation PT, for sure. I met him on SomaSimple years ago too. He is about to do a PhD in psychology. His talk was about plotting a course through uncertainty, mostly by becoming a great listener. Allow for the patient's full expression of pain, answer the patient's question, "Am I alright?", use the patient's expression to have a conversation about values, and align goals and interventions with those values.

d) Below Eric, Rajam Roose. She wasn't a speaker, she was the ORGANIZER. (I'll talk about her a bit more, a bit later.)

e) Joe Brence, NXtGen. He is a SomaSimpler too. Joe spoke while wearing a GoPro camera around his head so he could film the crowd.  He introduced his MIP algorithm. M = Motivation, I = Input, P = Plan. Here is his blogpost about that.

f) Jason Silvernail. For over a decade, since even before Somasimple, Jason, on active duty in the U.S. army, has been posting at least as long as I have..  He spoke about "Crossing the Chasm: integrating pain science and finding your way". He said at first all he thought we'd need was a bridge, but later realized we probably needed a whole navigation system. Why? because the chasm was way, way bigger than he first suspected, with lots of varied terrain. His proposed nav system includes a comprehensive way to make decisions, manage uncertainty and move forward, forget about "tools" - they can't tell you when to use them or for how long, and being "eclectic" is not the answer.  It is a way to make decisions - software, not hardware. It's process, not product. Dump out the toolbox. Get rid of the hoarded clutter. Make sure there is space to integrate new material. A good navigation system will do three things: accurately reflect the ground, recalculate the route if you make a wrong turn or miss one, and give an accurate arrival time. To navigate the chasm, you need to know the science (basic science, published evidence, the context), apply critical thinking, and use claims responsibly. As the system gets more complicated the rules that govern your behaviour need to become simpler. Things you say matter, are a direct reflection of how you think.

g) Neil Pearson - Neil integrated principles from yoga therapy into pain science. He uses yoga as a kinesthetic vehicle for learning/teaching neuroscience and pain science. "Any aspect of your existence can be used to change suffering"

h) Barrett Dorko - he's been posting ever since the internet was invented. I've known him as long as I've been on it, about 15 years at this point. He writes every day on SomaSimple. His message is always "Understand More, Do Less".

i) Ravensara Travillian - massage therapist in Seattle,  PhD in Biomedical and Health Informatics, works with refugees. She deftly wove into her talk several previous talks of the weekend, and took the Moseley challenge, which was "prove yourself wrong."All the while she worked on her slideshow, she chatted and visited freely. I know, because she and I were staying at the same place all weekend. Plus she was the chauffeur. Clearly, she knows how to multi-task and be focussed on What Must Be Done all at the same time. She treats people who have been through the worst of the worst a human could go through, a ripping apart of their existence and support structures, community, death of loved ones including war and murder, landing in a foreign land with nothing and not speaking the language.  She recounted instances where, had she known some pain science, she might have been of more help to people like this. She is Truly Awesome.

j) Me. What can I say about me? It was a three-hour presentation crunched down into 45 minutes. It included touch, how it's processed. What I wanted to convey was that when you add physical contact, you are holding the entire NS, that messy kludge of an added-onto system, in all its evolutionary glory, from the most primitive C fibre to the most sophisticated human brain function, all at the same time. That I think it appreciates caring contact/attention at every one of its messy levels. That I think it likely helps it to recombine its functions and dispel inconvenient positive feedback loops of which "pain" might be one. That in any NS alive and awake, all we are doing is interacting, not operating. That "operating" (or "curing") is something surgeons do, with their patient under anesthesia, not awake and alive and sensing the way our patients are. That to think we can change ANYthing from the outside of somebody else's conscious nervous system is conceit. That when the ducks line up well the NS changes itself, sometimes readily, sometimes less readily, but without any further ado. That all we can be is a catalyst to a favourable reaction. That catalysts leave no trace of themselves behind. That we can take pride in being the best possible catalysts we can be. Instead, I rambled on about the critter brain and sensory processing and descending modulation and nonspecific effects. Oh well..

k) Cory Blickenstaff - Cory has been on SomaSimple.com as long as I have. I first met him in about 2007, I think.. He spoke about being a contextual architect, and having people learn where their movement edges are, through "edgework", a term he coined. He demonstrated it at the summit. It's about finding the boundary to movement, and respecting it, while exploring it. He brought forth the "OK" scale. More about that.

l) John Ware - John discussed the profession of Physical Therapy, that he thought it was heading in the wrong direction, in the U.S., at least, how he thought it got off track. And he named names. :)

m) Kara Barnett - I met Kara for the first time a year ago, in San Diego where she works in a multi-disciplinary pain clinic. She was attending my humble dermoneuromodulation workshop, hosted by Rajam. This was her first time speaking at a major event, about her work in the clinic, where she sees many chronic pain patients. She was Awesome.
OK, now the story of how I met Rajam Roose.

Who is Rajam? She is a massage therapist living and working in San Diego. She lives in a house with four cats, two bunnies, and a husband who cooks like a dream. At age 20, she tossed in the towel, her life up to that point, and went hitchhiking. She travelled for three years with a dog, lived hand to mouth, has written a book about her adventures. She settled down in Alabama, where she was born and raised, studied massage therapy, met her future husband there, moved to San Diego where he was from, and where he teaches high school, and went into practice. She contacted me on Facebook A few years ago, I got a private message from this woman, a stranger, who wanted to thank me for allowing a free copy of my manual to be out on the internet. She had downloaded it, quickly taught herself how to use it, and wanted my address, because she wanted to send me a thank you present. She made homemade soap, and asked what my favourite scent was. Sandalwood, I replied. Next thing was a giant heavy box of beautiful homemade soap arrived where I live! It was enough to last about a year. It must have cost a fortune to send by mail, but she swears up and down it didn't cost very much. She hired me I think I was her first gig she ever organized. She recruited Jason Erickson, the MC for the summit, to help her. They shared organizing responsibilities, and in the summer of 2012 I visited San Diego for the first time in my life. Pretty nice place. I met her kitties and bunnies and her husband, who cooks like a dream. She hired me again A year ago I was back in San Diego, teaching a small group of mostly PTs who wanted to learn my version of manual therapy based on neuroscience and pain science. This time I stayed at her home. She let me become attached to her kitties. (I love cats.) She pulled off organizing an entire summit! It was during that visit she decided the world needed her to organize a summit. She immediately contacted Lorimer Moseley to explain her idea and to ask him to keynote it, and he immediately accepted. And last weekend, it transpired. It was a resounding success. Enough people registered that Rajam not only broke even, she even paid for speaker airfare and accommodation. By herself. She is not an organization, she is an individual who made this event happen. And she is already planning the next one. The next one will be even more awesome, I think. Look in the link to see who will be speaking!!


Edit: March 3 2015: One more picture, the back of the heads of a bunch of SomaSimple members who were also speakers. They sat in what appears to have been an emergent, self-assembled SomaSimple "boy" zone.
Posted by Diane Jacobs at 1:40 PM