"The pain is gone"

To me, an old-fashioned human primate social groomer who has always leaned harder toward the "therapist" side of treatment rather than the "physical", but who uses manual therapy as my main intervention, the advantage of deep science-based pain models like my favorite, the pain neuromatrix model, is that one can remain connected to one's patient (i.e., in good therapeutic contact) while explaining to them what their experience of pain, or in this case radical pain relief, might mean, regardless of how strange it may seem to me or may have seemed to them.

Here is a diagram, famous by now I'm sure, of Melzack's neuromatrix model. Click on it to make it bigger, so you can read the detail. 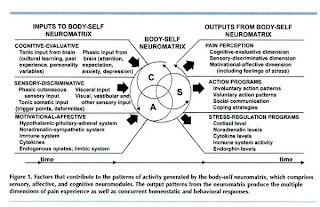 I often haul out this little diagram and sit down with a patient, because a lot of times, simple handling isn't quite enough - they need answers.

Case in point: last week I saw a young woman for the first time. She had been sent to me by her massage therapist (who I've known for years) who had worked with her for many months. Let's called the patient Rosie (not her real name).

Rosie had had a prior history of low back pain for ten years, for which she had gone to a chiropractor semi-regularly. She had worked as a fund raiser for some outfit, until about two years ago; while nursing a sprained ankle (and on crutches) she was in a car accident. Now she had back pain, sprained ankle, and neck and shoulder pain. She was unable to do her fundraising job anymore and had had to quit.

She had endured persistent neck and shoulder pain for two years in spite of seeing 36 of the finest manual therapists, both conventional and alternative, that Canada has to offer, in two different provinces, and having attended a modern pain clinic.

Then, to her surprise, during a meditation retreat in December last year, her pain vanished. All of it. Gone.

Emboldened, she began a vigorous yoga program, and inadvertently overstretched something. Bam. She had felt instant leg pain and a lot of weakness in the quads. This had persisted beyond the massage therapist's expertise, and was why she had been sent to see me.

I learned that after she had given up fundraising after the MVA, she had become involved in an experiential psych counselling training program, where they let her learn from a physical position of comfort, i.e., horizontal.

At visit #1 I had taken her history and provided some manual treatment, some very rudimentary pain education, and showed her a neural glide to do for the leg. She'd been happy for something to do - anything.

Yesterday at visit #2, I was ready with a neuromatrix diagram and was planning more in depth pain ed.

She arrived.
I asked how she was doing, and she said, "Fine, I'm all better."

I asked how she had managed it this time, and she replied that the evening prior she had invited two shamans in to work on her, and they had, with burning herbs and drumming, and lots of touching. Before they left, they had pronounced her cured.

And sure enough, she felt that way. No pain.

She really did seem better, could walk better, move better, sit comfortably, breathe better.. Wow, I thought. "Good for you," I said.

We had an hour to spend, so I decided to stick with the plan; I asked her if she was interested in learning some things about pain. She said yes, so I invited her to go through the neuromatrix diagram with me. We sat down and I began explaining how the center circle with circular arrows represented the entire nervous system, how it was always processing even at night during sleep, how it was more of a verb, therefore, than it was a noun, how the diagram depicted the movement of this neuromatrix through time... how it had three main inputs on a spectrum that ranged from mental (cognitive evaluative) to physical (sensory-discriminative) to physiological (motivational-affective) and three main outputs, one of which just so happened to be pain, which could be influenced by any of the three inputs and which in turn influenced the three main inputs plus the other two outputs...

As we wandered through the diagram, I plugged in pieces of info she'd given me, she asked questions, we talked about treatment crucibles, safe containers and catalysts, symbolism and shamanism, meditation and movement forward. During her shamanic experience she had had a great deal of novel sensory-discriminative input, through all her senses, not just kinesthetically. I told her it sounded like it had been enough to get her neuromatrix off the square it had been stuck on. I pointed out, based on the prior meditation/pain relief experience, how much more her particular pain matrix seemed to respond to shift of cognitive input than it did to sensory-discriminative input. I mentioned that for most people, sensory-discriminative input of the physical kind was often sufficient, but that she'd burned through 37 manual practitioners of various kinds, including me, without much help, and she nodded..

She told me this was all making more sense to her now.. that she was someone who just didn't "get" things through only her body, the way most people can if some reasonable sensory-discriminative input of a novel sort is provided... Instead things had to make sense to her through her emotions/mind.

Apparently long ago some other PT had loaned her the book "Explain Pain", for a few months, and she had diligently made notes and some photocopies, but it had never quite sunk in or gelled. Now it was finally starting to make sense. She said, "I wish I could read that book again. It was really good, as I recall." I replied that she could buy her own copy if she wanted.

We discussed rehab, and I told her about some options, but that wherever she went, to stay in complete control, not let anyone rush her, and to use "graded exposure" and "pacing", concepts she already knew about.

I showed her two chapters from Pain: A Textbook for Therapists and she took copies. She said this would help her learn the neurobiology for when she herself would be a therapist, counselling pain patients. I mentioned she would be able to buy this book online as well - that buying these two books for herself would be much cheaper in the long run than seeing a bunch of expensive therapists for sensory-discriminative input that her particular brain seemed to not be wired to be able to easily accept. She agreed.

I worked with her leg for a little while, and unlike the first time, this time she remarked on feeling heat and movement in the thigh, and non-painful sensation connected to the leg in other parts of her body. I asked her if she could do an active straight leg raise after, and to her surprise, she could.

She left very pleased with all the progress she had made in one week, by her own efforts. I didn't need to see her again in my opinion; her downregulation was well and truly hooked back up. She's away to her next adventure, all in one piece again finally.