In this year of COVID: Indi Samarajiva, Part 1

I love this writer. Indi Samarajiva is 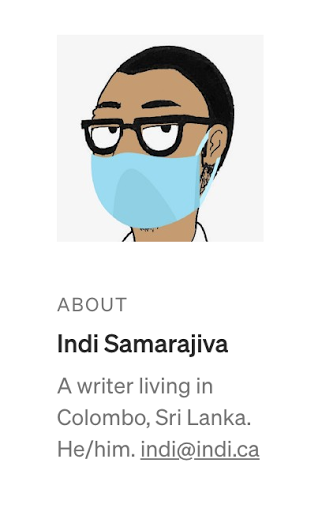 I want to post excerpts from three recent articles by him that I found in Medium dot com. to do with American politics and the recent election.  Part 1, his observations on the human numbness, lack of empathy, anonymity, uneven experience, and obliviousness associated with societal collapse that occurred in his own country and what he sees happening in the US.

I lived through collapse. America is already there.

"Living in Sri Lanka during the end of the civil war, I saw how life goes on, surrounded by death"

" I lived through the end of a civil war — I moved back to Sri Lanka in my twenties, just as the ceasefire fell apart. Do you know what it was like for me? Quite normal. I went to work, I went out, I dated. This is what Americans don’t understand. They’re waiting to get personally punched in the face while ash falls from the sky. That’s not how it happens. This is how it happens. Precisely what you’re feeling now. The numbing litany of bad news. The ever rising outrages. People suffering, dying, and protesting all around you, while you think about dinner. If you’re trying to carry on while people around you die, your society is not collapsing. It’s already fallen down."

"Collapse does not mean you’re personally dying right now. It means y’all are dying right now. Death is sometimes close, sometimes far away, but always there. I used to judge those herds of gazelle when the lion eats one of them alive and everyone keeps going — but no, humans are just the same. That’s the real meaning of herd immunity. We’re fundamentally immune to giving a shit."

"Collapse is just a series of ordinary days in between extraordinary bullshit, most of it happening to someone else. That’s all it is."

"If you’re waiting for a moment where you’re like “this is it,” I’m telling you, it never comes. Nobody comes on TV and says “things are officially bad.” There’s no launch party for decay.... Perhaps you’re waiting for some moment when the adrenaline kicks in and you’re fighting the virus or fascism all the time, but it’s not like that. Life is not a movie, and if it were, you’re certainly not the star. You’re just an extra. If something good or bad happens to you it’ll be random and no one will care. If you’re unlucky you’re a statistic. If you’re lucky, no one notices you at all."

"I was at work when someone left a bomb at the NOLIMIT clothing store. It exploded, killing 17 people. When these types of traumatic events take place, no two people experience the same thing. For me, it was seeing the phone lines getting clogged for an hour. For my wife, it was feeling the explosion a half-kilometer from her house. But for the families of the 17 victims, this was the end. And their grief goes on. As you can see, this is not a uniform experience of chaos. For some people it destroys their bodies, others their hearts, but for most people it’s just a low-level hum at the back of their minds."

"As a nation you don’t seem to mourn your dead, but their families do. Their communities do. Jesus, also, weeps. But for most people it’s just another day. You’ve run out of coffee. There’s a funny meme. This can’t be collapse, because nothing’s collapsing for me. But that’s exactly how collapse feels. This is how I felt. This is how millions of people have felt, including many immigrants in your midst. We’re trying to tell you as loud as we can. You can get out of it, but you have to understand where you are to even turn around. This, I fear, is one of many things Americans do not understand. You tell yourself American collapse is impossible. Meanwhile, look around. In the last three months America has lost more people than Sri Lanka lost in 30 years of civil war. If this isn’t collapse, then the word has no meaning."