Yeah... about burnout. Been there, done that.

Rajam, my San Diego friend and CEO of the San Diego Pain Summit, posted a thread to Facebook and linked a blog post by a recent physio grad who was fed up and had decided to quit physio. She is planning to include a workshop in the coming 2019 SDPS that will explore this topic.

It reminded me of my own episodes of burnout, how they felt, how I navigated them. I posted the following:


"I graduated very young (age 20) and flamed out completely several times right away (mostly because of being so immature). Most of the time I left PT behind completely and did something else for awhile, always knowing:

2. That I really didn't want to right then.

I would throw myself 100% into something else. Nothing else I did ever worked out, not the way I wanted it to anyway. And always (bizarrely!), I would start to miss physio after a year, or two, and I would go find a job somewhere and start over. I started over So Many Times. Mostly because while I liked the work I hated the jobs and the work environment (hospital).

Things I escaped to:

2. Tried to be a real estate agent for awhile. Which was way worse.

After about 13 years of going back then quitting again then going back, I left the province I had grown up and worked in (Sask) for an entirely new life (B.C.). I managed to adapt and reconciled burnout as being not about the physio but about the physio JOBS, and did a lot of locum work to get by. Locum work suited me perfectly. I had no responsibility, didn't have to "fit in" anywhere, didn't feel obliged to participate in longterm work relationships, just parachuted in, handled patients for somebody, then left a few weeks later when they came back. And I did some travelling, learned Spanish (sort of).

I bumbled along through life for a couple decades that way, until I finally felt ready to have my own practice. After that I settled down quite easily, and it was about 15 years later I got itchy feet again, moved back to Sask. almost a decade ago. Took a two-year sabbatical. Opened a new practice. Have bumped that one around three times before finding it a forever home.

It's been a crazy pothole filled road full of sharp bends and several times in the ditch, but no serious accidents. I managed to do it my way, which happened to not have been the usual way, that's all. Me and physio, we've been married for 47 years but not monogamous (at least I wasn't), and eventually I think we simply got used to each other. It has always taken me back, so that's something good right there. I've seen other careers not last nearly that long.

And I've moved personal (home) location about 30 times in that 47 years. I can't even begin to remember how many different places I've worked. Lots and lots, enough to see the grim underbelly of both private and public practice. I only really "loved" physio after I got my own practice together, which looks way more like a massage practice, really. But I like it. Nowadays I call it my retirement practice. About a half-hour away, there is an old osteopath, in her 90's, who still works, still sees patients out of a trailer. I often think to myself, that will probably be me, working with people in pain until I drop dead, because why not? Life blows by and then you die. So why not do whatever you most desire at the time, whatever turns your crank for awhile, all the way through it?"

Looking back, I realize that burnout is mostly just a brain's way of signaling that it needs novel stimuli, a change, a rest, a chance to spread different wings, try new tricks, to take a break. By caving into my own brain every time I got that signal, I hope I managed to preserve most of it for my old age. Or maybe I simply had social attention deficit disorder. Not biological, because I can focus like a fiend on anything if, and as long as, I want to.
Wanting to. That's where the rub lies.
Other people's expectations may not be, may never have been, congruent with my own.

Life is not for sissies. I have come to appreciate (especially after reading Damasio's book!) that most of my own personal conscious awareness became locked up in navigating boundaries between 'self as authentic individual' and 'self as member of the human primate troop', locked down into the delicate psychosocial navigation needed to live life (on the one hand) according to my own psychobiological drives and demands, and (on the other) the human intricacies needed to dance with the rest of the people I had to work with and deal with, neverendingly. Which is always hard, but especially for an introvert.

In the video called The Quest to Understand Consciousness, Damasio briefly described various sorts of self, and a quick superficial tour through the brain.

I built a few slides of screenshots I took. These slides will be in the presentation I am scheduled to make in Taiwan. Thanks, Damasio. I cannot wait to see you live in person, Feb 2019 at Rajam's conference.


1. All the major action in our nervous system has to funnel back and forth through the brain stem. When I refer to "nervous system" I include the peripheral nervous system; enteric, sensory, autonomic. So does Damasio. 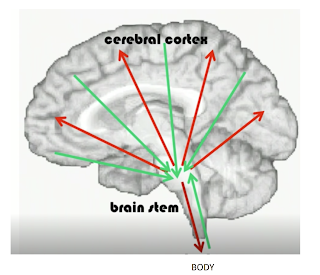 2. A close-up of the brainstem reveals that it has a dorsal part and a ventral part. The dorsal part (red) contains many closely and heavily interconnected nuclei that regulate survival and homeostasis, including the periaqueductal grey (PAG), which as we know, is crucial in pain regulation. 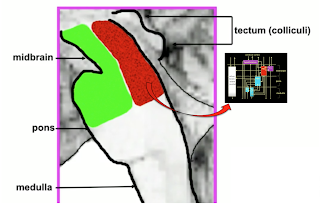 3. If the dorsal part is damaged, say by stroke, you lose your mind. Your body will carry on for awhile all by itself, and later with a lot of help from caregivers, but you won't have awareness, be able to form thoughts, nothing. No volition. Total oblivion.
If the ventral part is damaged, say by stroke, you can get locked-in syndrome, where you have plenty of volition but no access to your body. None. Unable to moooooooove. Unable to communicate. (Seriously, can you imagine anything worse? Which is why I will go to my grave denouncing high neck manipulation. But that's for a different blogpost.)

The colliculi are for vision and hearing. The brain itself will take in visual and auditory stimuli and make sense out of them, concoct a story long before "we" (the "I"-illusions riding around in the same nervous system that is the boss of us, not the other way around) can possibly become aware of said story.

4. Then I made a slide of the remainder of his talk, about all the different "selves" we have thanks to evolution. (This is what his entire new book is all about.)
Every animal (including smart invertebrates, probably) have proto and core selves. In fact, in the book he talks a lot about bacteria and how they get along with no nervous system at all. How they operate as individuals (un-divide-ables) and also when in a group.

Autobiographical selves are a lot fancier. I think he should have included elephants, but that's just my opinion. He jokingly included dogs, which I left out.
Their main claim to fame is they have access to past events, and future possibilities, the ability to imagine different scenarios, and the capacity to make meaning out of all of it.
At once.

The human species is off by itself in a text box, because of the way we have become so utterly dependent on culture to regulate us.

This is what I was referring to earlier, re: burnout. So much psycho-social hard drive seems to get burned through simply adapting to each other, other people and their ways, starting with family and the culture itself and its history, our society and what "it" (whatever it is) expects in terms of behavioural homogeneity from its citizens. We all have that hypothetical cross to bear.
For introverts the cross seems extra large and heavy.
So.
Much.
Work.
So.
Tiring. 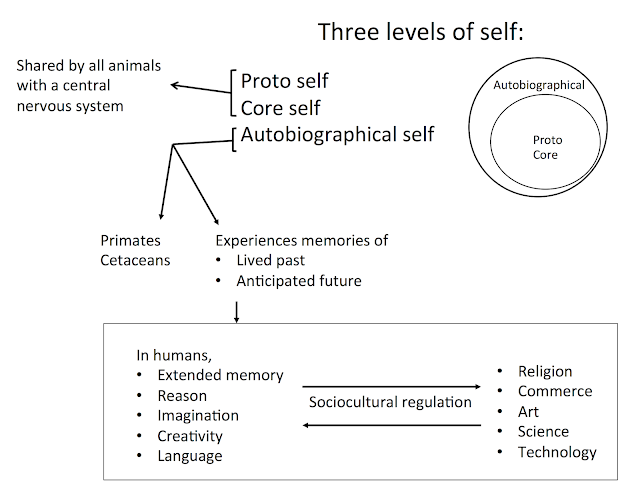