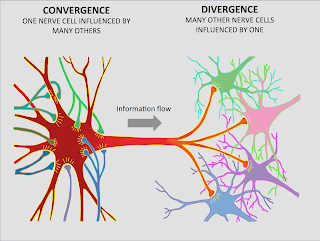 Every day I get up around 6:30, grab some coffee, and sit down to read whatever is on Facebook or in my email or on Feedly.. hoping to be inspired.

It's always SUCH a pleasure when a mini convergence occurs, when two or three or four things from totally different sources all pile up and make my brain go Whoopee!, this is exciting!

Here is what has stood out for me in the last few days:

I first noticed her post to Edge.org a year ago. She was one of a couple hundred people who answered the Edge question that year, which was "What do you consider the most interesting recent [scientific] news? What makes it important?", and she replied,  "Your brain is predictive, not reactive." It made enough of an impression that I referenced it in my book.
In the last few days her name came up again! I found this paper she co-authored, published in October, An active inference theory of allostasis and interoception in depression. Wonderfully juicy. The core part of "self" - and all tied in with brainstem necessities and thermodynamic exigencies.
If that is too dense to absorb all in one sitting, no worries, here is a video of her, explaining what she means.: Just yesterday I saw this piece from Nautilus magazine, Ingenious: Lisa Feldman Barrett. Inside a new theory of emotions that spotlights how the brain works.
Here is a quick excerpt:


"The way that I like to explain it is, if you think about it from your brain’s perspective, your brain is in a dark, silent box called your skull and it can’t get out and experience the world directly. It can only know the world through the sensory inputs that come through your sensory systems—your ears, your eyes, and so on. It only has effects. It only has wavelengths of light, or changes in air pressure, or concentrations of chemicals and it has to figure out what caused those in those wavelengths of light, or changes in concentration, or air pressure, and so on, so that it knows what to do next. So how does it do that? When there’s a flash of light, how does it figure out what that flash of light means? All it has at its disposal is your past experience, the past experience that it has wired into itself, basically."


Reading her carefully it seems to me that "self" sand "mind" are a bit different from each other. I think self is inherent and mind is changeable. I think self uses mind, directs it around to gather info, but isn't fully overlapped with it. If mind is the movie we see of self, or a mental screen on which we see our life as a cognition of self, self is the projector itself, and also the projector operator, running itself from only the new little bits it lets into itself as fuel, as inspiration, as bits of stress it can also auto-manage.

So, my self sees a lot of new stuff in the course of a morning, sitting, drinking coffee, looking at my computer screen, surveying all the world has to offer up. My self screens out most of it as irrelevant. However it latched onto Lisa, because it found her quite salient. It said "See?? This is important. This links Everything Together." What does it link together? Mind, body, biology, existence, thermodynamics. All that stuff.

I'm not a philosophy geek but I can truly truly appreciate life as an absurdity, so much so since childhood that sometime around age 10, I chose to remove myself from the pool of females who would live to reproduce more humans. This morning this piece by Ralph Ammer, in his blog Personal Growth, linked to by a facebook friend who is very much into personal growth, jumped out at me: Is it worth the trouble? I found it absurdly uplifting. And the gifs are great! We can't deny the unreasonable world. We can't abandon reason. He declares, "One must imagine Sisyphus happy." Imagine!! (This is why the gifs are so great.) He advises:

"1. Permanent revolution: We should constantly revolt against the circumstances of our existence and thus keep the absurd alive. We should never accept defeat, not even death, even though we know it can’t be avoided in the long run. Permanent rebellion is the only way to be present in the world.

2. Reject eternal freedom: Instead of enslaving ourselves to eternal models we should hold on to reason, but be aware of its limitations and apply it flexibly to the situation at hand — or put simply: we should find freedom here and now, not in eternity.

3. Passion: Most importantly we should always have a passion for life, love everything in it and try not to live as good as possible but as much as possible."

All that is pretty much congruent with my own set of values, and also the ones I learned in PT school. Yup, life can suck bilgewater, but keep at it and keep moving. There is nothing better to do. Be in the "now" and keep going until the end. Try to be a decent person while you're at it.


Mini-brains
Finally. It looks as though attention is being paid to peripheral ganglia and their own computational capacities. They do run a bit of stuff that gets sent back and forth. The headline implies that ganglia have just been discovered, but really, they have been there all along, and in fact were there long before brains or central nervous systems even evolved.


Discovery of 'mini-brains' could change understanding of pain medication

Pretty sure they are what can help make good results from manual therapy good results. In manual therapeutically naive people anyway.  If the therapists know what they're doing. After all there are opioid receptors in peripheral nerves too. And yes, descending modulation and non-specific FX are still the main effectors of a successful intervention no matter what happens peripherally. Never said they weren't.

Personal convergence
I feel my existence completely supported by these finds.
1. I already knew life was absurd and in retrospect have continued pushing the boulder up the hill anyway, in life as a manual therapist.
2. Lisa Feldman Barrett makes sense, and she's a female who makes sense, so in a man's world this becomes strategically important to me, who is also female. It's confirmation that females are incredibly brainy, inclusive, and that this one has taken everything into account. I absolutely love her wide angle, panoramic even, point of view. I want to be like her when I grow up.
3. It's a fine way to make a living, moving skin around and affecting nervous systems for the better. There is even a lit path that may have to do with stuff going on in peripheral ganglia, before some of that info even reaches the spinal cord.
...................