I just got home from the second San Diego Pain Summit, #sdpain 2016.
My brain is still reeling around from all the extroverting I did, and all the great info that poured into it from all sides, for three days straight. Wow. A lot of familiar faces from last year and a lot of brand new faces.

1. Sapolsky was polished, fast, funny and straight up fabulous. I knew he would be. I could hardly hang on to anything he was saying, I was such a fan girl, sitting right in the front row.


Every paragraph ended in a hyperbolic punchline, something that will be familiar to anyone who has ever watched any of his youtube videos.

He said lots of pertinent things, mostly about stress.
He said one thing about social grooming which was this: it does relieve stress in both groomee and groomer, but in primate troops, at least half the time, stress is relieved best not by grooming someone but but kicking or sinking canine teeth into someone further down the hierarchy, especially if you are male.
Alas.
Oh well.
I expect human males attracted to grooming work are mostly nice guys who wouldn't go around kicking or biting others for stress relief. I do wonder about high velocity manipulation though, and "deep tissue" massage, and any kind of poke-you-puncture. All those seem a bit abusive to me. Maybe they are veiled aggression. 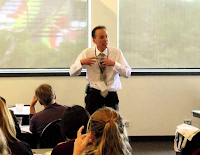 2. Kevin Vowles had a great experiential exercise. He had us stand up and put a finger up in front of our faces. One's attention is immediately drawn to the finger. All else not focused on becomes blurry. Then walk around with all the attention and focus on the finger and notice how hard it was to not bump into others all milling around likewise focused on their fingers. Then try again - this time de-focus from the finger and focus on the surroundings of the finger. Ah, much easier to navigate.
The finger = the pain, and everything else = your life.
The difference between acceptance and commitment therapy and cognitive behavioural therapy, according to him, is that CBT starts with cognitions - change those and behaviour will change, whereas with ACT, focus on what holds value, let value motivate new behaviour.
Quality of life can go up independent of pain. Activity and satisfaction can go up without there being any change in pain.
And I love that he used finger traps as a metaphor for wiggling oneself out of a stuck situation!

3. Bronnie wants us to be like water: flow all around our patients and support them without any sharp edges. She quoted Bruce Lee many times. 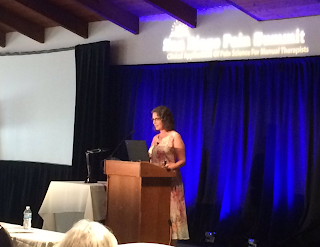 4. Ravensara Travillian spoke about the need to anchor the massage therapy profession in reality. I don't have a photo of the slide that very much appealed to me, but I'll describe it: a triangle. Bottom left corner, labelled "referent" - i.e., a corner of reality that has been objectively, scientifically described. Next corner, concept. Last corner, symbol.
She explained that a lot of the ideas in massage therapy are symbolic and conceptual, and totally missing is the referent, the anchor. Which leads to a lot of misunderstanding and misleading ideas about "energy" and "quantum" etc. She says that pain science might be a great anchor point. I do too, because a) it's science, and b) we treat people who have pain, most of the time.
Her talk applies to every allied medical profession you could name (yes PT, I'm looking at you..). And the medical profession itself sometimes. Especially the orthopaedic branch of it, which refers patients to surgery for a lot of pain situations that would likely respond to things much less invasive. See "Back pain? Try some placebo surgery".

5. ALL the speakers were great. Seriously great. I mean, Benedetti for petesake!! Yes, he followed on the heels of Sapolsky, who admittedly is a tough act to follow, but he's only the world's foremost researcher in placebo and nocebo effect! Nice coup, Rajam Roose. Nice coup.

You can order and purchase videos of the entire event, of course (but for Sapolsky),
but for a full three-D experience, do not make the mistake of not coming out next year. Nothing can replace being there, being part of a troop of human primates celebrating advances in pain science and figuring out, together, how to integrate them into our separate clinical lives.

Not connected directly to the summit but something that appeared serendipitously today, on Facebook, was Dave Walton's series of videos about pain assessment. Dave Walton, some of you may recall, is a former chair of the Canadian Physiotherapy Pain Science Division.
Anyway, the current chair, Tim Wideman, has developed the coolest image for pain and pain assessment. The. Coolest. Ever!

The inner grey part is the aporia, the subjective place that only the patient can access, the actual experience of having the pain.

All around that, the blue part, is the part the patient can describe using metaphor.
The spikes on the ball are measurable through qualitative means. The tips are pain-related physiological changes, which can be measured more objectively.

I think this metaphor is mesmerizing, fantastic, hugely valuable.
I think Dave should be a speaker at the next summit.
............

There is a ton more, but for me, those were the highlights. I loved every second of the summit and all the speakers, the smaller events like the art show and podcast panel, the networking event, all the lunches and snacks and conversations. My brain is still full and I am tired, so I'll stop here. Maybe more will surface and I'll say more but for now, this feels like a good place to stop. :)

Postscript Feb 29/16:
1. Ravensara loaded her slides up onto Facebook! Here is the slide I was talking about earlier.

This applies to so many situations. If we keep these three things clear when we discuss, it makes life so much easier.
2. Todd Hargrove had us rolling around on the floor on and off for about 4 hours, as he explained Feldenkrais methods of being in a body better. I remembered something from a long time ago that I actually had considered using as a book title: To feel better in your body, learn to feel your body better. But I discarded the idea as it was way too long. However, I kept a version of it for exercise suggestions I uploaded for people to do at home.