A snapshot down into the chasm

If you look around the internet for images that relate to "chasm", you will find a lot of them that look like this: 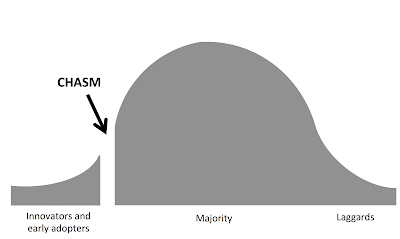 Online battles still rage, on facebook and blogpost, mostly polite but not always, about what it is we think we are really doing in manual therapy. Here is a recent example. One of the replies I made there forms the basis of this blogpost.

Operators
Those of us who still imagine we are directly affecting "tissues", and "tissues" are responding, directly, to our tender or not-so-tender ministrations, fall into the "majority" camp, I think.
Some will remain "laggards" until they die.
I would categorize both these groups as "operators," because they insert themselves into the process as direct agents of any change. ("It was all about me, and my magic hands, making your tissues behave themselves.")

Interactors
Those of us who think the nervous system is involved and on top of the process, adapting like crazy to everything we are doing to it, exploiting the opportunity offered it physically to create descending modulation that will result in greater movement and less pain (because it's cheaper), fall into the first camp. I would categorize this group as "interactors," because they realize the process of manual therapy is a dance between two nervous systems having a silent but busy kinesthetic conversation. ("It's all about your brain, taking advantage of an opportunity to change all its motor output and ultimately, be able to move you around more efficiently with less effort, in a less expensive manner. My job is just to hold up a flashlight, metaphorically speaking, so it can see what to do next. I'm just a catalyst, leaving nothing behind, as your nervous system "corrects" its own self.")

What's really at the bottom of this cognitive chasm?

A cognitive glitch resting on a mistake about who/what is the real "agent" of change.

Climbing down to the bottom of the chasm

Regardless of whether we consider ourselves interactors or not, another person's tissue is all supposed to feel "homogeneous"; when we find something under our inquisitive little manual therapy fingers that doesn't feel that way, we are drawn to palpating it; if we aren't careful our heads fill up with all sorts of assumptions, many of which are wrong, based on the fact that the "blumps" we feel tend to go away when handled, and that usually people feel better and can move easier after. Thus do practitioners end up developing operative conceptual hallucinations based on palpatory pareidolia.

How do we get over that chasm?

I don't know for sure, and maybe any bridge over it is completely a fantasy, because I have read that anyone's brain can only have one conscious thought at a time: but I think we can at least swing across that chasm back and forth by being able to think bottom-up (outside-in) and top-down (patient's brain, inside-out) at exactly the same time.
Sound impossible?
Part of the cognitive hack I used on myself was to think at a neuro-cellular level instead of a tissue level, i.e., subtract any cells that were not neural. That way I could boil it down to there being just three very fast-conducting neuronal cells between my hand and the patient as person. From skin cell to sense of self. Then from patient's brain back out again, to all end organs of the patient's NS, like "muscles." Like smooth muscle. Like efferent autonomic nervous system. That was my (as an operator) new way in.

I comforted myself that all the processing going on in there included me/any contact I was making, that the patient's brain was adding my exteroceptive contact with it into all its own body schema, and that its "maps" don't all load simultaneously, because of different fibres and different fibre speeds. That depending how slowly and carefully I loaded, how long I stayed in one place, what angle I used, whether I loaded or unloaded with one hand, some blump or other I could feel with my other hand, the brain would try to take advantage of every little shift and change, and exploit the input to self-correct its output, incuding any pain output.

Pain is an output. That is something you simply have to accept as valid. It's an idea that changes everything. It goes completely against all models of pain that are bio-medical. It's a verb, not a noun.

The other part of the cognitive hack was to realize that if there were only three cells between another person's brain and my hand, there were ALSO only three cells between my hand and my brain, and that I had to learn to listen acutely to feedback from my hands to tell me what was going on in the other person's nervous system. I.e., not their "tissues." ... that person's brain was feeling me, and my movement, intention, acceptance, emotion, every bit as closely as I was feeling "it."

Only after I started becoming aware I was interacting did I see the chasm, that I had crossed over it, and that in retrospect, I'd been "operating." (1)

What do we really "know" about "tissue"?

Probably not as much as we think we do. Take the case of muscle. I don't know how it is out there these days in education, but when I learned about the nervous system, it was taught as an outflow system, with the muscles as end organs. Technically this is perfectly true: However, my PT ed. took place way back when pain science had not yet made it onto anyone's radar, and PT training ended up being all about muscle. How to poke, prod, strengthen, loosen, muscle. Very very bottom-up. Very tissue-based.  All about striate muscle. Smooth muscle was inside the body in organs - we didn't need to worry about any of that.
I honestly cannot recall pain ever being discussed. I endured a very narrow education about treating other humans, with all the emphasis on "physical" - the "therapist" part was not taught in any systematic way. We were supposed to just soak that up along the way by hanging out with more senior therapists during clinical training. They would supposedly "model" being a therapist, and we were supposed to implicitly copy them, I guess.

Except that some of them annoyed the bejeebers out of me, and I had no intention of ever copying them or modeling myself after them.

Physiology was taught in a disconnected fashion. We took physiology along with med students and nurses, so we were drenched in the biomedical model. I remember there were lots of graphs, and that I had to kill a turtle, both of which did not please me. It was never explained how touching people might affect their physiology.

From the other side of the chasm, manual therapy models still, to this day, do not seem to care much about physiology. They are still very heavily tissue-based and dualistic.
The sensory nervous system and autonomic nervous system are not regarded as important for being feedback for a brain, trying its best to move its organism around. They are never suspected as having any potential glitches or positive feedback loops manifesting as localized peripheral physiological problems.
...............

Smooth muscle cells (e.g., in skin organ for sure, vessels, sphincters, tubes, ducts, even fascia..) will contract (in the skin organ at least) when exposed to products of nociceptive-capable peptidergic neurons, such as Substance P, neurokinin A, CGRP.

It's a cellular function, chemical, that presumably evolved to assist with wound healing.

Normally, these substances excreted in dribble-like, tonic fashion by nociceptive-capable neurons, are used as trophic factors by their target tissue, and any excess cleared away by ordinary circulation. (You will find this explained well in Peggy Mason's book, Medical Neurobiology. (2) )

Presumably the smooth muscle cells *won't* be unduly activated, or stay activated, unless circumstances oblige, such as:
1. A big phasic burst of substances are released: One nociceptor's high threshold is reached and it depolarizes, spewing its products all over in faster, higher-than-usual concentrations, and starts a neurogenic cascade that activates other processes that in turn activates more nociceptive neurons which go on to activate other processes, etc., a physiological positive feedback loop..
2. Maybe a tipping point is reached whereby contraction of smooth muscle cells in fascial tissue occurs faster than any counteracting process that would result in their relaxation, and a mini "compartment syndrome" establishes itself
3. The "compartment syndrome" becomes exacerbated by the paradoxical effect of the smooth muscle in vasculature being relaxed (vasodilated) by the same substances, so that more blood is brought in or else can't escape contributing to more pressure inside the compartment
4. Some minor glitch occurs, whereby the reciprocal efferent "commands" by the ANS (contract, no, relax, no, contract) don't complement each other to smooth out the behaviour of the tissue end organs. And the fascial smooth muscle cells stay contracted.
5. Maybe nociceptive-capable neurons don't have to be involved at all - maybe it's simply confusion within subsets of sympathetic efferent commands (contract, no, relax) that cancel each other too well and don't allow tissues to change at all.
Oops.

Is that a blump I feel?

Do they deserve to be stabbed? Is there not a kinder way to deal with them?

Neuritis
I have not yet found any histological papers that discuss smooth muscle in the connective tissue coverings of nerve trunks; however, there is plenty out there on smooth muscle in vascular walls, and nerve trunks travel along with vessels and are full of vasculature. Drainage out of nerves (which have become mechanically deformed, through adverse use or not enough "normal" movement) can be a big problem: if substances that contract smooth muscle build up within neural tubes and tracts, it seems logical (if they contain smooth muscle cells) the entire 3-tube neurovascular system in any given nerve branch could be affected, contributing to more adverse neural tension, amplified nociceptive input, delayed clearing of substances from the intraneural and extraneural milieu.
That could be one reason we can feel "strings" and cords.
I think.

On the other hand, if just the smooth muscle cells in the vasculature that feed and drain nerve trunks were affected, by either mechanical distortion OR by lack of clearing of built-up products of nociceptors inside the nerve trunk (yes, nerve wrappings are self-innervated by nociceptive capable neurons), it would scarcely matter from a clinical standpoint - those palpable bungee cords and strings would still form, probably. I'm almost certain.

..I'd bet the farm on smooth muscle deactivation/decontraction being *mainly* by descending inhibitory modulatory control, from more rostral areas, nuclei that Butler refers to as the "drug cabinet" in the brainstem, down to the dorsal horn. Dopaminergic, noradrenegeric, serotinergic, opioidal.

I know that large fiber input does boost spinal gate control of nociception via glycenergic inhibitory interneurons (there is direct evidence for that, at last, after 50 years: see Foster et al. http://www.cell.com/neuron/pdf/S0896-6273(15)00143-9.pdf ); I'm still looking for direct evidence that said inhibition of nociception can therefore lead directly to smooth muscle cell relaxation at a spinal cord reflexive level - that's an extra step.

Until such evidence shows up and accumulates, the 'least wrong' assumption is that good results from manual therapy are due to descending modulation of a favourable kind, and that non-specific effects/ "common factor" effects, are the ones in final charge over pain perception and physiological self-correction.