The computer appeared to be working much better this week. I'm all set to go to Brazil tomorrow, stick loaded. Last minute fussing over this and that. Had a moment of panic when I couldn't find my ziplock bag with the adaptors and phone charger in it. Looked all over. Finally found it in the new computer bag I bought on my way home from the Vancouver MTABC Pain Conference last weekend, while I was killing some time waiting for the finishing touches on my dead computer. Turned out it wasn't dead after all.. just comatose again. It smartened up with a new library rebuilt by the technician. So, yay.. staved off having to buy a new one, yet again.

Anyway, the weekend went well, I think.. Doug Alexander from TouchU.ca is going to put all the presentations online, accessible by the conference attendees for a year, and available as online courses to anyone.

A highlight was that I got to meet and have a nice long conversation with Jan Dommerholt, who up until now had had email exchanges with years ago, but had never met in person. He was very nice to me.

I still don't buy the idea that "trigger points" of the sort that are palpable are actually in muscle, despite his protestations that a) he can palpate them there, and b) he can prove they are in muscle through modern day imaging. The only picture of one (supposedly one), is from the 1950's.. he had it in his presentation. 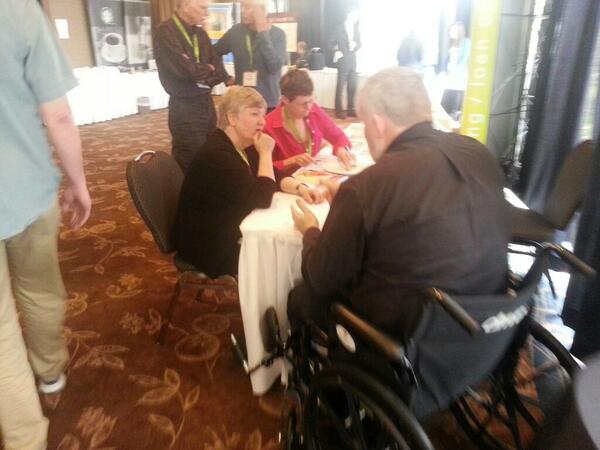 Here is a pic someone took of us after lunch. He is in a wheelchair these days because he is recovering from a hip fracture sustained in a freak car accident five weeks prior.
From Jan's presentation I learned several things -

1. he does not discount any sort of input into the left side of the neuromatrix, including cutaneous input

2. he does include nervous system considerations, including the neuromatrix model itself

3. he admits there are "trigger points" that are too deep for him to get a fix on/palpate

4. the work done so far has shown that contracture in striate muscle is *not* because of acetylcholine leakage at motor end plates (i.e., at least one hypothesis is disproved)

5. the "bibles" by Travell and Simons need a massive update, which is unlikely to happen, as long as they keep selling the way they still are/do. Lots of $ for the estate.

(I forgot to ask him, but this may be the source of all that money the trigger point people use to fund all the research they do on trigger points.)

He took us through the history of his meeting with Travell and Simons and becoming hooked up to their enthusiasm. They found an inexhaustible promoter-scholar-researcher in Jan, that's for sure.

ON THE CURRENT STATE OF "NEEDLING"

He teaches courses in dry needling. From our conversation I learned he feels despair (as we all do) about all the needling going on out there that is not accompanied by any neuroscience or pain science (he makes people pass a test on all of that before they can be certified by him.)  He deplored the state of affairs, with way too much needling going on based in poor training. I gathered he didn't approve of the Chan Gunn model (the one that took over Canada like a strangler fig tree).

WHAT EXACTLY IS A TRIGGER POINT, DEFINED?
He answered my question re: what exactly is being "triggered", & why are these points (so far inside the body, so supposedly responsive to a needle) called "trigger" points, with this: If they trigger a "muscle" twitch, then they are trigger points.
He doesn't differentiate between teeny muscle contracture "trigger" points and other "sore" spots, as near as I could determine: if there is a twitch to palpation, that defines it as a "trigger" point in his mind - nothing else, like for example, a crabby nerve with secondary hyperalgesia creating protective reflexive motor output from the cord (which would be palpable much more superficially).
To me this represents a confound that has not been satisfactorily answered or eliminated. Simon Gandevia tried hard to eliminate cutaneous confound from ordinary "muscle" reflex testing and as far as I know, couldn't.

ARE THEY CAUSATION OR JUST CORRELATION?
He didn't say much when I asked him, "what if the teeny muscle contractures you study are just secondary to altered physiology that is secondary to nervous system dysfunction, and not a "cause" of anything"?
He slid past the idea that perhaps other things buried in the skin organ, contracted up by smooth muscle, secondary to physiological disturbance, might be a confound to the notion of being able to reliably palpate trigger points in striate muscle. He insisted his hands could find them except where "they are too deep" - one was left wondering if he meant the muscle was too thick, or if the cutis/subcutis was four inches thick and hard to feel through. This was unclear.
HE DISAPPROVES OF SOMASIMPLE
He thinks SomaSimple is mean to people. He has the right to entertain that opinion. Certainly SomaSimple isn't any friend to trigger point hypothesis, or ideas about treatment that are based on fascia. It's there to critique ideas, not people, but if people are too wedded to their ideas they may feel it's an inhospitable place.. that isn't SomaSimple's fault though.
I countered with this: people who are trying to think for themselves and who have become burdened by popular (but wrong, from a nervous system standpoint) opinion need a place to get gripes off their chest, and argue with (not from) "authority."

MY TAKE ON JAN DOMMERHOLT (FWIW)
Even if I still think trigger points don't exist except (*maybe*) as fleeting physiological phenomena that need no intervention of the stabbing or skewering sort, I appreciate that he has enough energy to continue researching. (He finds it effortless, apparently, whereas I found my one lone foray into it exhausting and a complete waste of my precious life that I'll never get back again.)
Maybe one day he'll manage to disprove "trigger points" as any sort of clinically important entity to his own satisfaction and to all, but meanwhile he is still invested in the hypothesis, and has funding to continue. He was clear about the model not being a scientific model yet, but only an hypothesis. Which he loves to test endlessly. And is paid to test endlessly, I gather, or else maybe gathers enough credibility equity from to make it worth his while.
Anyone who can fluently speak and write in four languages has a cortex at least four times thicker than mine and earns my respect. English as one's lone language is so limiting.
On the other hand, there is surely something to be said for weeding out ideas that are mutually exclusive. I imagine that decluttering concepts from one's brain is at least four times harder to do when one thinks fluently in four languages.
A HUMOROUS MOMENT During the panel session he recounted a woman he treated with ultrasound, three visits to her home, with the machine not plugged in. He said, "I don't know how she got better because I didn't do ANYthing."
I pointed out he had touched her skin.
At which point the crowd laughed. To which he replied, "Touche." About which I was pleased. (But I hope not too smug.) ........... ADDITIONAL THOUGHTS The fascia people are excited about finding "nociceptors" in fascia. One of the questions that came up during the panel discussion was an open-ended query into the significance of that. I replied that since C-fibres are everywhere (most of those polymodal) and that their main job was to assist tissue health by providing trophic factors (e.g., Substance P, CGRP, etc) to tissue to help it stay healthy, I wondered aloud if researchers were conflating "C-fibre" with "nociceptor" as if the two terms were completely interchangeable. The panel discussion closed on that note.
But back to trigger points for a moment: apparently there is a needle in existance that can suck up fluids in tissue very precisely. The procedure is a) find a trigger point b) stick it and suck up the fluids. Then, I guess, dry needle, then test again. Write up another paper noting that after dry needling, trigger points are usually gone. Interestingly the substances picked up by the needle are the usual - Substance P, CGRP, etc. However, those are just regular C-fibre products - and trophic factors! - the cell gets rid of through exocytosis, as far as I know. Everyone gets excited and thinks it automatically means they've found a "nociceptor" which usually becomes conflated with pain generator, or something. Seriously, that stuff is going to be in tissue everywhere you look, probably. Including in the skin organ. Anyway, my point is that you'll often find sand on a beach. Maybe these substances aren't anything too special - strictly correlative, not causative.
FURTHER READING (OLD BLOG POSTS)

2. Digesting the Moose Jaw adventure: Part I (October 2012: reflections on how the medical people relate to the (ahem) hypothesis of "trigger points" from their terminally operative perspective)
3. To sum up.. (Feb 2012: A synthesis of blog posts to do with operator mentality and treatment models)
4. Letter to a biomechanically-minded therapist (July 2011: About pattern-seeking behaviour and how we have to remain vigilant about it)
5. Why I don't buy the idea that "trigger points" are in muscle (July 2011: could be all sorts of things besides muscles misbehaving)
6. Yet another "trigger point" discussion (January 2012: Lots of quotes, discussion re: pain as a brain output not a muscle input)
7. Trigger point model deconstruction, models in general (January 2012: A Spanish blogger retweets a paper debating the existence of trigger points (I'm an atheist myself, in case no one noticed...)
8. Fred Wolfe, trigger points, fibro (Feb 2013: a welcome surprise, a voluntary withdrawal by the guy who married tender points to a diagnosis of fibromyalgia, of this same diagnostic criteria.)

Inside these blog posts are links to papers, etc. that further discuss the issues at hand.

Diane, Great post. It recounts on your part a very brave conversation. I've nothing to add as you've said far more than I might have.

One thing though, if he dislikes Soma Simple, he must REALLY dislike me.