The Skin as a Social Organ. Part 2f: Human allogrooming

The paper, The skin as a social organ


Part 1: Dual nature of touch: as PTs, do we "get" this? Part 1a: Touch can be pleasant, rilling Part 1b: Vallbo on C-tactiles

Part 2a: Different kinds of touch Part 2b: Proxemics Part 2c: The sad dearth of manual therapy aspects in reviews of interpersonal touch Part 2d: Learning to sit still, learning to behave, learning to not be connected to oneself Part 2e: Touch early, touch often

"A major context for social touch among primates is grooming. For most primates, grooming one another (allogrooming) is not just about hygiene. Although it does serve this function, the amount of time many primate species devote to this activity is disproportionate to what is required for keeping fur and skin clean. In fact, some species (such as gelada baboons) may spend up to 17% of their time grooming despite requiring perhaps only 1% for strictly hygienic purposes (Lehmann et al. 2007; Dunbar 2008). Instead, allogrooming has taken on a new signiﬁcance as a form of bonding and reinforcing alliances (Dunbar 1996, 2008).
In contrast to the work on grooming in nonhuman primates, research on human allogrooming is rare. It is possible that grooming is a comparatively more restricted behavior in humans (for example, in intimate or parent–offspring interactions, or in ritual or professional transactions), or that its social role has been largely replaced by language (Dunbar 1996). Nelson and Geher (2007) have deﬁned human grooming broadly as including ‘‘any behavior in which an individual removes or mimics removal of something from the skin or body.’’ In nonhuman primates, such activity involves parting the fur. Typically, allogrooming movements involve a coordinated sweeping through the fur with one hand and plucking at debris with the other (Sparks 1967; Dunbar 2008). Humans, of course, have much less abundant hair than our primate cousins, but our allogrooming practices may have adapted to our nakedness. A homologue to the ‘‘sweep’’ may manifest in the stroking gestures over the skin surface common in the ‘‘dynamic’’ category of interpersonal touch. Such dynamic touch is also pleasant for the toucher, with others’ forearm skin rated more pleasant to touch than one’s own, and forearm skin as more pleasant than glabrous (palm) skin, whether one’s own or another person’s (Guest et al. 2009)."

All right, now maybe we can get somewhere.

"In contrast to the work on grooming in nonhuman primates, research on human allogrooming is rare."

Actually, no.. I would beg to differ: millions of hectares of trees have sacrificed their lives so that avalanches of research could be printed on this. People call it by any other name than what it actually is, human allogrooming. Instead it is called massage therapy or manual therapy. Those names are pretty generic - so hold onto your hat. There are a million "kinds." Acupuncture falls under this along with its supposedly a bit more biomedically acceptable version, dry needling. High velocity manipulation [the kind that paralyzes unfortunate victims who only want their necks to feel better, or who get hornswoggled into thinking they "need" to have their necks or spines cracked at least once a month forever], falls under this. Gouging with many different kinds of tools, often made of some sort of fancy material, falls under this.

From this Wikipedia page on Reification:

"Reification (also known as concretism, or the fallacy of misplaced concreteness) is a fallacy of ambiguity, when an abstraction (abstract belief or hypothetical construct) is treated as if it were a concrete, real event, or physical entity. In other words, it is the error of treating as a concrete thing something which is not concrete, but merely an idea."

Another way to look at this is objectification. Buried deep in our social psyche is the regarding people as though they were interchangeable, fungible. Lip service might be paid to individuality, but in the end, in manual therapy, patient problems are relegated to various diagnoses or body parts. The tennis elbow in cubicle 17. The knee in stall 12. The low back in cubicle 8 - give that one to Jack - Jack has a knack with delivering the crack.

Individuality is allowed to flourish when it is to the advantage of the practitioner, however. Whoever comes up with the latest technique du jour, or fool proof system, gimmicky tool for sale, snazzy video to promote it, supposedly "wins."

I’ve always felt confused about what my profession is supposed to be about.

ANdy, an Irish PT and poster to SomaSimple, said this recently, and eloquently:

"We do seem to have a problem with specialization where too many senior Doctors/Consultants seem to have far to narrow knowledge coupled with highly technical but limited skillsets and lack the general oversight that care so often demands. I think that too often we, as physiochiropathics, simply ape that, a pale shadow that haunts the passageway of healthcare leeching life from those who pass too close to our undead shades."

A few years ago, I was transfixed for awhile with an inner vision that resembled ANdy's. I saw this, on ScienceBasedMedicine blog, by Mark Crislip:

“Monkeys, and other animals, groom each other often with a marked reduction in stress. Touch is good, and one doesn’t need to wrap it up in pseudoscientific nonsense for it to be beneficial.”

Inspired by this, I wrote this, in order to try to gain clarity. Operator/Interactor.

It contains a slide of various animals performing social grooming, social contact. I always include this slide when I teach. 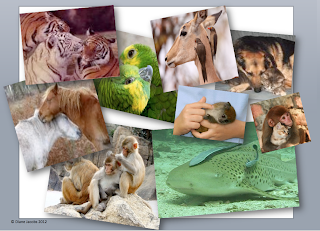 In my opinion, leaving these items and their interactions out of the picture led us down some pretty convoluted rabbit holes, leading nowhere but to mutually exclusive dead ends. I try to put individuality back into the picture. Every brain is unique, pain is always personal, be with your patient wherever they're at, try to see their life from the perspective of their neuromatrix, not your own. Not your profession's even. Not when your own profession has become just another sausage factory.

Hey, somebody has to do it, point out the obvious.
Even though it makes people cringe, I use the term, Human Primate Social Grooming, at least once during the talk.

Anyway, back to the paper, I look forward to greater clarification.

More to come, because it's long.