Part 8: Beyond the gate: Self as mayor

The three-ring circus of subjective "self"

This is in many ways my favorite part of the neuromatrix model, all the juggling the brain routinely! does with these three inputs into its multiple modes of operation. It has to, or else things go very sideways. It's amazing, really, that more doesn't go wrong in such a dynamic place as the brain. It really is more a verb than a noun.

A few years ago I did a presentation on the neuromatrix model...and man..!
I looked at that thing for hours, until I came up with a three ring overlap that had the output domains in the middle as emergent processes based on the three continuous input feeds, and the input feeds arbitrarily connected (by me) to large functional aspects that seemed to correspond, and about which I could find information. 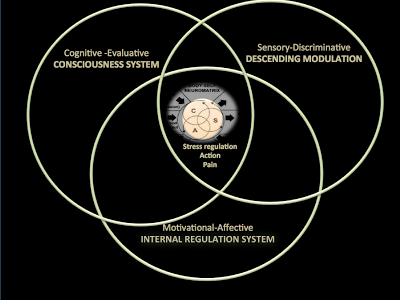 Seriously, I couldn't think how else to depict the verb that the brain really is. Picture this sort of Venn diagram churning around, multiply levelled and multiply outputting, continuously, from the moment it forms in utero to moment of death, when it can finally catch a break. [Still not very happy with the image. Not dynamic enough. I should have tried to make spiraled arrows or something. Oh well.. ]

Back to Melzack and Katz:

Figure 2 shows the model as it evolved up from the gate control model.

There is no way to peer into this book, as it is from 1968.. none that I could find at least. Apparently the first ever "International Symposium on the Skin Senses" was held in Florida in 1966. [Dang, I missed that..  I was in grade 10, I think.. ]

Anyway, this image shows how far back in time Melzack was already monkeying around trying to figure out how to depict brain involvement with pain. He was already hard at work building his three input domain conceptualization in 1968!

Melzack and Katz continue re: the names of the input domains, sensory-discriminative, motivational-affective and cognitive-evaluative:

"These names for the dimensions of subjective experience seemed strange when they were coined, but they are now used so frequently and seem so ‘logical’ that they have become part of our language."

People have had 50 years by now(!!) to become accustomed to them... when is it ever going to happen. When will people stop talking about pain as an input? It's so misleading.