Life, if we are realistic, is just a waiting room in which we amuse ourselves before we can go through a door with a sign on it, upon which is clearly written, DEATH. Lucky for us, the waiting room is huge, big enough to encompass entire oceans, full of brightness, infinite distractions, lots of other people, most of whom are merry, many useful and interesting ways to spend time together or alone.

"Even keel" is a metaphor. It stems from the many centuries, I like to imagine, when humans traveled by ship to visit each others' cultures, trade, conduct war, all those human things. Thinking about "even keel" takes up quite a bit of my personal hard drive. Not only have I learned how to be even keel in my own life (am not finding myself blown sideways by it or capsized as often anymore, that is..), when I am at work I focus on how to help brain parts in another person' nervous system get along better together, or at least I imagine that's what I'm doing. Like an engineer fixing systems in a building, or in a computer. Except, I don't really do anything, I just add bits of provocation and wait for feedback to tell me I'm on the right track. Most of it has to do with waiting for then seizing moments. But I'm geeky enough to want to know everything I can, anyway, about the systems I work with, even though human primate social grooming is really quite instinctive.

"Even keel" applies to nearly everything on any level in human life. I made a little picture (thank you photoshop) out of other little pictures to illustrate the old Greek story about the sea monster and the whirlpool that I first read about in James Willis' excellent essay by the same name. In his essay, the two-headed sea monster represents pseudo- and anti-science, which he does not want to steer too close to in his work as a doctor. The whirlpool represents scientific reductionism, tyranny by protocol. He doesn't want to become sucked into becoming a protocol zombie. Instead he wants to be able to steer his own boat, stay even keel between two extremes, retain his own locus of control within his treatment relationships. 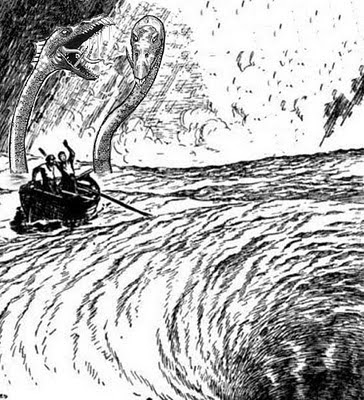 I decided to steal his metaphor, practically intact, for my own work as a human primate social groomer. My sea monster has two heads too - one is anti-science and the other pseudo-science too, although, some days their names change to myofascial release and craniosacral therapy. The whirlpool is orthopaedic manual therapy, which (at least in Canada) is almost a Byzantine religion with its own high priests and devotion toward evidence-based regimented protocols, ostensibly to keep therapists safe from harm or blame, keep them "pure" and untainted, keep the money of society flowing toward our profession. But when I look at OMPT in Canada, I see huge flashes of tooth fairy science as described so succinctly by Harriet Hall. In Beyerstein's excellent essay on pseudoscience (50-page pdf) he stated that in his expert opinion, any "science" which doesn't take neuroscience into account is pretty much, by definition, pseudo. I have never sat in an ortho training workshop in Canada and once heard the slightest whiff of anything to do with neuroscience, not even physical nerves which slide past the beloved joints upon which ortho-lovers are so transfixed. In the workshops I attended they taught that you can actually feel movement in joints and improve movement in joints with fancy pressures at precise angles. From outside the living human body. Maybe this has changed in the last few decades, but judging by the kinds of ortho-esque "studies" I see done... somehow I doubt it.

Anyway, enough rambling on about that. "Even keel" is what each human, regardless of what one ends up doing in the Big Waiting Room called "life" prior to going through the door called DEATH, tries to achieve. We each have a life to navigate and moods to manage. How we each end up doing that and whatever success we manage to demonstrate in the process, has a lot to do with luck and circumstance in terms of genetic makeup plus upbringing, nature/nurture. I found a nice paper today, Psychosocial and Neural Correlates of Resilience, which is open access, at least for now. (Thank you to Integral Options blog.) In it I found:

"In experiments by Meaney and colleagues, the offspring of female rats displaying more nurturing behavior (high licking and grooming compared to low licking and grooming) had less methylation of the glucocorticoid receptor (GR) gene in the hippocampus, resulting in higher GR expression, lower anxiety-related behavior and better HPA axis regulation. In addition, research by Nestler and colleagues has delineated molecular mechanisms underlying resilience to a social defeat stress paradigm in rodents, including the induction of gene expression changes only seen in resilient mice."


Gee, I like to think I'm resilient, even keel, or at least have learned how to be, even though I ended up with a human mother who did not believe much in pleasant licking or grooming. Somehow, even though this happened to be my personal fate, in the big waiting room of life, I was drawn, explicitly and implicitly, to work which is all about (metaphoric) licking and (actual) physical social grooming! The complete and utter simplicity and rightness of it, the naturalness of it to me as a human primate, is the wind that fills my sails, rows my boat, has helped me attain/remain "even keel."

That is pretty much all that is at the core of what I find mysterious in my own life. It's not earth-shaking or dramatic or life-threatening, it's just a story, likely a boring one. But it's my own little one. And I don't mind putting it here, where very few will probably ever find it.
Posted by Diane Jacobs at 5:52 AM