In "Yet another trigger point discussion" I discussed some of the comments in the long long comment section in Mike Reinold's blogpost about dry needling.

The trigger point true believers and dry needlers seem to think sore spots in the periphery are the "cause" or "source" of "pain."

This is a flawed mental trajectory, backward, inside out, upside down, and, well, just plain wrong. It supposes the following:
1. Set of tissue circumstances (not yet shown to be "real) --> "pain".
2. Solution: jab the tissue --> reduces "pain"
3. Mechanism? I don't know. Punishment of the body for merely existing?

A different (better-informed by pain science) mental trajectory is as follows:
1. Nervous system affects tissue; nervous system gets stressed, tells tissue the "wrong thing", tissue tightens up, possibly via efferent capacity of visceral afferent neurons into somatic tissue, especially cutis/subcutis (which is very thick) and neural tissue itself (peripheral nerves contain a lot of non-neuronal tissue).
2. Sore spots can be found on palpation.
3. They are the result of "pain" processing (i.e., they are areas of hyperalgesia secondary to central sensitization), not primary "causes" of pain.


Blaming tissue for pain is like blaming the screen for a bad movie, instead of the projectionist. Then poking holes in it to try to change the movie. It seems.. I don't know.. sort of futile, superstitious even.

Not to say peripheral soreness can't be "treated" however - a sore spot is just the peripheral end of a continuously looping verb called the nervous system - it usually will respond to exteroceptive attention paid to it, take advantage of novel stimulation to self-regulate/improve output behaviour. It can be projectionist, screen, movie, all the actors and directors and producers of any given movie, all at the same time.

Tissue though, tissue is just a surface acted upon from within. It does not act unless instructed to do so. And it is entirely innocent where pain is a problem. 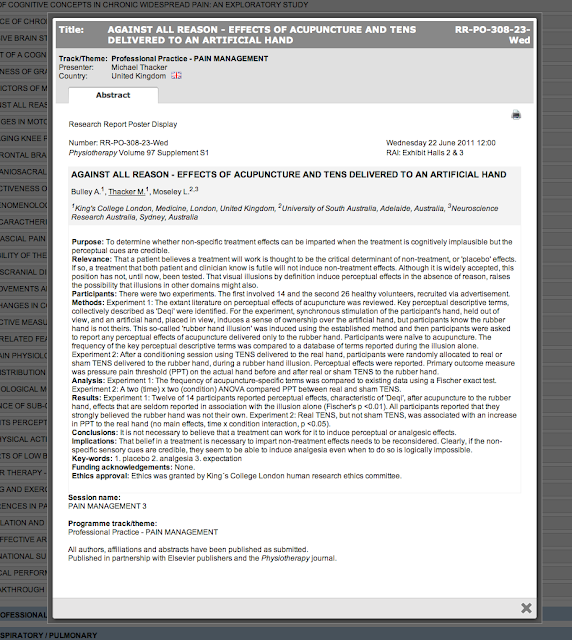 I took a look around in the abstracts from WCPT, and found an interesting poster abstract under "Pain Management" (see image). Here is a better link to it.

I'd like to point out a simple concept known as "mutual exclusivity". This means, two ideas can be so incompatible, so contradictory, that they can't both be true at the same time.

So, what is a person supposed to believe? A meat theory that has at its core a bunch of ritual behaviour, i.e., poking at never-proven-to-exist "trigger points" in "muscle" with needles? Or a nervous system based theory that has demonstrated its veridicality as seen in the screenshot of this abstract, where results from needling are obtained whether the needles are put into a real hand or a rubber hand? They cannot both be right.

Look. Here's the thing: if you took the entire human nervous system and laid it out in a straight line, it would be 100,000 miles long (Angvine). If you are a manual therapist or a needler of some persuasion or other, you would be at one end of that long line, the "affective" end. At the other end would be the "effector" function of that nervous system, which consists of output to muscles, joints, tissues, everything. Anything you might do to it has to go through the whole long system before any change can happen in the tissue you hope to "affect". In other words, you can't "do" ANYthing directly to tissue, without the nervous system's permission. The only reason a nervous system doesn't look linear is because it's all cleverly folded up into something that looks like a human organism.

I think you overstate the "true believer" approach as simplistic and mechanistic. I, for one, certainly don't conceive of needling in this way. In fact, I think it can fit in nicely with current pain understanding.

Please allow me an antidote form today: a 50 y old man referred to me for physical therapy and dry needling, was seen for the second visit. At the initial exam he said to me "my father had neck pain for years, tried everything, but the only thing that helped him was acupuncture." I explained I did not do acupuncture and declined to do dry needling at the initial visit choosing education, exercise and manual therapy. Today he said it helped but repeated his story about his father. I needled a very tight upper trap. No TrPs, just a lot of tension. He reported feeling better immediately upon sitting up. Was it the needling that made him better or was needling just the best psychosocial approach to reach his CNS and assure him that he would be okay?

This was the first time I have ever had someone say this to me. However, I believe when you have an approach available that is reasonably safe and appears to fit the need of the patient it should be used. There are many ways to reach the CNS with the information that things will be okay. The models we construct for ourselves and our patients are our attempt to put what we do into terms and patterns that can be understood. Maybe in some cases we are all right.

Thank you for your comment Arthur. What do you *think* you are poking when you perform needling?

I first penetrate the skin, then, generally, some more dense tissue, fascia I suppose, then muscle. There are different textures I can sense through the needle. I am working to improve my understanding of anatomy to better judge what the different layers of tissue are at each depth.

I am not sure this really answers your question though. I am behind on the rubber hand needling comment. But is it leading to a point about why under some circumstance you needle a rubber hand and it is effective in producing some good outcome? If yes, then we may both agree it is because you can affect the CNS processing of pain without needles. You can affect the CNS processing of pain with only information from a book. This doesn't mean that other approaches are of no value. Why manually handle a patient if good outcomes can be achieved with only information? Manual touch is a tool (sorry Jason, but don't understand the objection to this word). Some therapists prefer and some patients are best served with manual touch alone. I would be surprised if manual touch alone worked for everyone. In my experience no one approach works for everyone. Dry needling can have a place in the treatment of patients with pain.

Thanks for your reply. You listed things you think you are needling. What do you suppose those things you carefully, and no doubt skilfully, poke, have to do with pain? In other words, how do you think poking helps somebody in pain?
You didn't mention nerves or vessels BTW. There are many, many of those, everywhere. How can you be sure you've missed them?

You are right, of course, there are nerves and blood vessels that are hit with needling. Maybe one out of ten patients will have a very small drop of blood exit with the needle. Fewer still may bruise. If a nerve is hit there may be a second of nerve associated pain. The next pass of the needle generally misses a nerve. There are areas to avoid around neurovascular bundles.

So how does this help someone in pain? In the case of the gentleman I mentioned who reported how his father was helped I would say the needling changed his belief about his own pain. In someone with a classic TrP, ie a taut band with a hypersensitive knot that refers familiar pain, I have a model to describe how pain is relieved. The model involves interrupting spontaneous electrical activity (same as ectopic discharge?) When SEA is reduced, pain is reduced. Others may offer better or more complete models.

Thank you for your reply.
>"I would say the needling changed his belief about his own pain."

Perhaps it gave him an opportunity to focus on it in an entirely novel way, and with close attention from a caregiver. The psychosocial context was different, and activated certain parts of the brain (e.g., orbitofrontal cortex, perhaps) more, or differently, maybe inhibiting the anterior cingulate cortex a bit more effectively.

>"In someone with a classic TrP, ie a taut band with a hypersensitive knot that refers familiar pain, I have a model to describe how pain is relieved."

This is where I disagree. I would call such a palpable phenomenon, 'autonomic behaviour', not a "thing". It's an efferent smooth muscle cell manifestation, a verb, not a noun - I disagree it's in striated muscle, especially since discovery of it is via palpation, and it's tender.
Hypersensitivity is called hyperalgesia. It's a central nervous system mechanism, defined as "Increased pain from a stimulus that normally provokes pain." (see link: http://www.iasp-pain.org/AM/Template.cfm?Section=Pain_Definitions )

>"The model involves interrupting spontaneous electrical activity (same as ectopic discharge?) When SEA is reduced, pain is reduced. Others may offer better or more complete models."

I also do not agree with the part of your model that suggests that someone on the outside of a human organism can interrupt its "SEA". As far as I know, this is simply not plausible. If anything, that nervous system would increase it's information collecting capacity.
I do not think your needles do that.
I think it's more likely that your needles create more electrical activity (i.e., new, added nociceptive stimulus), and perhaps the new stimulus creates new noise which the CNS decides to investigate, so it decreases the familiar "noise" for a time as it tries to determine which is the greater threat in the moment. If you're lucky, and the patient is lucky, maybe the neurologic jostle can help the CNS tip itself over into new behaviour at the level of the dorsal horn. Same as with any sort of exteroceptive approach. Which leaves us with the question of, why bother using needles at all in that case? Except to assuage patients who have been trained by needlers to expect and believe in the power of needles?

Arthur, please comment on this abstract: http://www.abstractstosubmit.com/wpt2011/abstracts/main.php?do=YToyOntzOjU6Im1vZHVsIjtzOjY6ImRldGFpbCI7czo4OiJkb2N1bWVudCI7aToxNTM3O30=&psArchive=aph8l5bhmieos306r15er8jf90 from AGAINST ALL REASON - EFFECTS OF ACUPUNCTURE AND TENS DELIVERED TO AN ARTIFICIAL HAND from last year's WCPT.

How is it possible to get "twelve of 14 participants (naive to acupuncture) reporting perceptual effects, "characteristic of 'Deqi'", after acupuncture to a RUBBER hand, "effects that are seldom reported in association with the illusion alone (Fischer's p <0.01). All participants reported that they strongly believed the rubber hand was not their own". It was a RUBBER hand, not a real one.
My question to you is, how do you square your explanation you told me you tell to patients, with this information?

"I disagree it's in striated muscle, especially since discovery of it is via palpation, and it's tender."

Here I feel fairly confident you are mistaken. The skin over the upper trap is easily moved over the deeper tissue. The ability to palpate the muscle is not difficult. Activation of the upper traps confirms location. Unless the skin is over 3 cm in depth I am confident I do insert the needle into striated muscle. Incidentally, the needle produces generally little to no sensation in the skin and variable sensations in the deeper tissue.

OK, say you're right, and you can get your needle into trap muscle. How do you know the "sensations" are not being felt in a nerve or a vascular structure?

What did you think of the Moseley abstract, Against all reason"? http://www.abstractstosubmit.com/wpt2011/abstracts/main.php?do=YToyOntzOjU6Im1vZHVsIjtzOjY6ImRldGFpbCI7czo4OiJkb2N1bWVudCI7aToxNTM3O30=&psArchive=aph8l5bhmieos306r15er8jf90