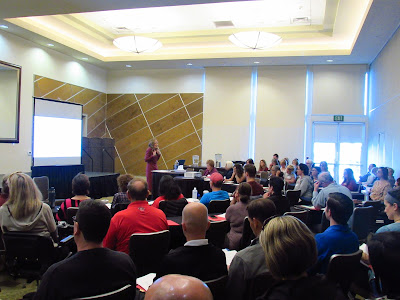 Every year this summit is the highlight of my life. My peer group is here. I am older than most of them but that's OK. The youngsters will own the world one day. The ones my age are all retired and living their quiet well-ordered boomer lives somewhere far away from physiotherapy, and far away from my own natural inclinations about what to do with the rest of my life.

Me, I can't seem to quit. I'm reveling in feeling the sea change, the pull of the tide. Like I'm lying in the tidal zone, enjoying it, not wanting to move.

I think I'll post about the workshops first, then speakers, and personal stuff later. Bear with me please, there will likely be several posts.

The first workshop this year was Empowered Relief, with Beth Darnell. Her bio on SDPainSummit website::

Beth Darnell is Clinical Associate Professor in the Division of Pain Medicine at Stanford University. She is a pain psychologist and scientist. She is a past President of the Pain Society of Oregon and is current Co-Chair of the Pain Psychology Task Force at the American Academy of Pain Medicine. Her NIH-funded research investigates mechanisms of pain catastrophizing and the effectiveness of a single-session pain catastrophizing treatment she developed. She is author of The Opioid-Free Pain Relief Kit © 2016 and Less Pain, Fewer Pills: Avoid the dangers of prescription opioids and gain control over chronic pain ©2014.  Beth also blogs for Psychology Today and the Huffington Post.

What I loved about her workshop:
1. Her work arises from her personal experience with chronic pain. She was a teen who had had chronic pain since childhood, at age 19 went to the hospital afraid of dying, was told there was nothing wrong and given a prescription for Vicodin. She climbed out of that rabbit hole successfully it would seem, and now teaches others to teach others how to become calm and remain that way.
2. Very much brings the relationship between stress and pain into focus. Intervene on the stress, the effect stress has on the autonomic NS, and the pain will decrease. Lots about breathing and relaxation and mindfulness.
3. She gives everything away for free. She makes no money from it. I admire that! It's trademarked (Stanford owns it) but she makes the boundaries very clear: don't leave anything out or add anything to the content, use the slides (all the slides) and you can personalize them with your own bullet points and speaking style.
4. She calls it "plug and play." And for sure, it is all very programmed. She has tried her utmost to make it deliverable by anyone who cares to teach it. And this was a teacher training for all of us to become accredited providers.
5. The "binaural" aspect of the relaxation sound file is cool: She explained that the RCT was done on surgical patients. All patients were under general anesthetic. Group one wore headphones during surgery that emitted tones, first into one ear, then the other, alternating. Group two wore headphones with classical music coming through them. Group three wore headphones with nothing, nada, no sound. It turned out that the "binaural" tone group received less anesthetic because their heart and respiration rate fluctuated less during surgery. (I found this fascinating and asked her if there had ever been any research combining binaural input with virtual reality in awake people, and she said she was on it. :) Just think: superior colliculi and inferior colliculi being stimulated at the exact same time. If only I had life to live all over again...)

The second workshop was with Steven Malcolm Berg-Smith. This is his bio from the SD pain summit website:

For over 30 years, Steven Malcolm Berg-Smith has worked as a behavior change counselor, health educator, drug & alcohol prevention specialist, and researcher.  He currently has a private practice in the San Francisco Bay Area as a motivational interviewing (MI) trainer, consultant, coach & mentor.
A member of the International Motivational Interviewing Network of Trainers (MINT) since 1994, Steve has conducted over 1000 motivational interviewing (MI) workshops and presentations throughout the US and internationally.  Considered a master trainer by his peers, Steve has served as a “trainer of trainers” for MINT, and collaborated in the design of MI-inspired behavior change intervention protocols for numerous national clinical research trials.  He has authored a manual on the “The Art of Teaching Motivational Interviewing,” along with several frequently cited articles on how to use motivation-enhancing tools and strategies to support adolescents and adults in making positive lifestyle changes.
Steven holds a MS in Community Health Education from the University of Oregon, and a BA in psychology from the University of Redlands.


This guy was an original San Diego surfer dude back in the day. He teaches motivational interviewing like no one else I've ever seen teach it. He stuffed information into our collective brains through every channel he could using multiple props to get his points across; music, movement, objects, mirrors, rattles. Snapping fingers. Clapping hands. Slapping thighs. Drumming on tables. Big sighs. Story-telling. Roleplay. Roleplay was huge. He had us practice listening, reflecting, summarizing, and giving hopeful messages.
I thought back to physio school and how USEFUL it would have been to include training like this right from the start.

What I loved about his workshop:
1. Lively and fun and totally engaging, included movement
2. Practicing the stuff, not just learning about it
3. A bit of ritual. He invited us to each write on a piece of paper some sort of "fixin'" behaviour we might like to get rid of, walk up to the front, put it in a box: he promised he would take the papers down to the beach April 1 and burn them in some area where small bonfires are permitted.
4. Not only was the workshop very interactive, but the content was also all about interaction. The patient has locus of control. Watch for change talk (whenever we heard any of that, we drummed on the table). We were taught to support that in our reflections (he picked up a mirror to symbolize that). No way for a predictive brain to NOT absorb some of that.
5. It all made me think about DNM. For a longtime I've taught manual therapy as interaction between two nervous systems at a non-verbal level, designed to enhance the function of the receiving nervous system. MI seems like the verbal equivalent of that. Imagine: DNM as non-verbal MI. MI as verbal DNM.
.....